Cory Blankenship, EBCI secretary of treasury, offered a breakdown of where the property is now and what it means for the Tribe after one year. The final purchase price for CSI was $280 million. This secured the entire ownership of the business. That means management is under the purview of the Tribe, but the Caesars brand is still attached to the business. Secretary Blankenship said that initial estimates were that CSI would bring $1.9 million in revenue directly back to the EBCI after year one.

Secretary Blankenship was happy to report that profits back to the Tribe were actually $4.1 million, a figure that was 116 percent higher than projections. He explained that the current contract is structured to where only 25 percent of profits from CSI are being directly sent back to the EBCI. The other 75 percent goes to EBCI Holdings, the company crafted by the Tribe in December 2020. Secretary Blankenship also sits on the EBCI Holdings Board. 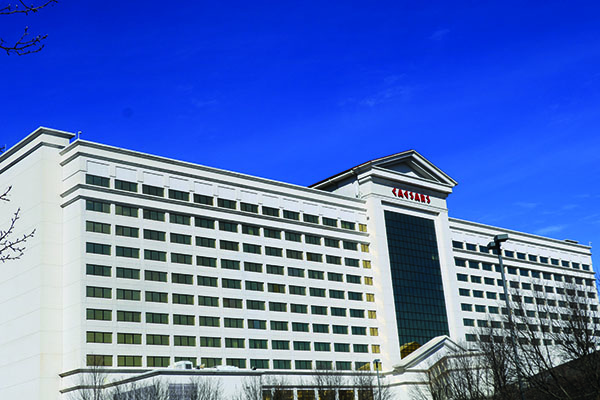 The outside of Caesars Southern Indiana casino property is shown in this photo from January 2021. (SCOTT MCKIE B.P./One Feather photos)

That means approximately $12.3 million went to EBCI Holdings in the fiscal year 2022. This structure was developed to satisfy requests made by the Indiana Gaming Commission (IGC). Secretary Blankenship said that the primary reason for such a large percentage being held is for liability. This was the EBCI’s first foray into commercial gaming, and EBCI Holdings was established for this business venture. He said that the IGC wanted to play the partnership carefully, and that it will help to lay the foundation as the Tribe continues to investigate commercial gaming opportunities.

“The reason for that split is because that is what is required currently in Indiana. As we move into other jurisdictions, they don’t have the same revenue rules that Indiana has. And we’ve had conversations as a Board to go back to Indiana now that we’ve closed that first year to say, ‘can we get some relief in that? Can we talk about a different revenue split?’ But it’s important that we share revenues with EBCI Holdings so that EBCI Holdings can grow to a level where it can fund its own deals in the future.”

He said that with a profitable year under their belt, the Board feels more confident about going back to IGC to renegotiate that split. Secretary Blankenship said that a good target they are aiming for is to attain a 50/50 distribution. This would drastically increase distributions to tribal operation while also maintaining the growth of EBCI Holdings. However, this would have to be agreed upon by the IGC.

He said that the Tribe is also relatively unique to the state of Indiana because they operate as a private company.

Secretary Blankenship also offered how the $4.1 million is fractioned again for distribution within the EBCI.

The negotiations being handled directly by EBCI Holdings instead of Tribal leadership is a measured approach, according to Secretary Blankenship. He said that they had to examine the cost and time associated with attaining state gaming licenses. He said that process includes a 50-page application, with his completed and submitted application totaling more than 400 pages.

“When you talk about that task right there. Collecting from 14 individuals, all of that information, applying for them a license, and then a year from now there’s an election and we have two new council members. Now, I have to take them back through the approval process, and I’ve got to do that every two years. That’s why, when we came in, we said it was important to create some segregation and establish this Board. Which they did. That wasn’t without controversy and that wasn’t without hesitation.”

He said this extends to how the deals are done. The general public isn’t privy to every detail of the process of these acquisitions. Secretary Blankenship said the small details are essential, and it’s often difficult to release anything throughout negotiations. He said that EBCI Holdings and tribal leadership have to be extremely measured due to the speed and sensitivity of these deals.

“You have to be very careful with these deals. Number one, they happen quickly. We can speak to a business partner, and they will literally tell us ‘we have to have a decision in 30 days, we’re ready to close.’ Well, that doesn’t fit nicely in the Tribal Council processes. What we’re very careful not to broadcast are the potential terms of the deal, who we’re talking to, and who the potential players are.”

CSI has been the EBCI’s first step into commercial gaming, but it certainly won’t be the last. Just this year the Tribe has broken ground on two new ventures. The first came in August with the celebration of a partnership with Caesars for a $650 million casino in Danville, Va. The second came this past Friday, Oct. 28 with the groundbreaking for ‘Project Thoroughbred’, a move into the Kentucky gaming market. An article detailing Project Thoroughbred is forthcoming.

What sets the CSI investment apart from Danville is management. EBCI Holdings has direct involvement in the decisions made at CSI, this will not be the case for Caesars Virginia. 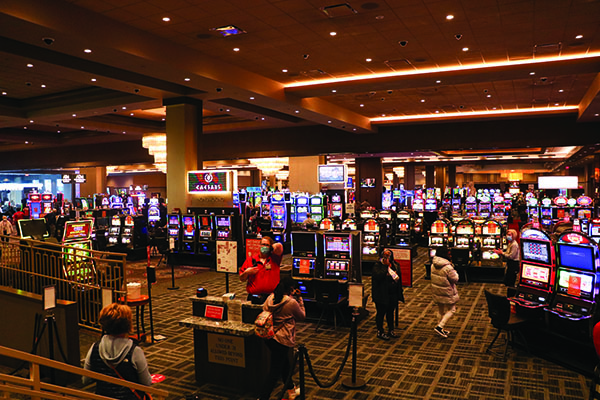 Shown in the photo above is a portion of the gaming floor at Caesars Southern Indiana casino.

“In Danville, we are just an equity partner. It’s not a scenario where EBCI Holdings is going to be managing the property. That will be done by Caesars. Caesars will operate that casino and essentially, we contributed equity, and we will get payment back that is equivalent to our equity position in the property (49.5 percent). That’s going to be purely Caesars management.”

Both of these casinos are quite different from Harrah’s Cherokee Casino Resort in Cherokee and Harrah’s Valley River Casino in Murphy. On top of the deal structure, Secretary Blankenship said the most obvious difference between commercial and Indian gaming is profit margins.

“With commercial gaming you are subject to the regulation of the state where the gaming is occurring. So, each state has a tax structure for their gaming operations. It’s typically 30 percent. When you talk about this top-line gaming revenue, take away a third. That’s going to the state to fund state programs. Much like we use tribal gaming to fund tribal programs. The revenue-generating opportunity on a commercial gaming facility is not the same as it is on a tribal gaming facility.”

He said that a common way to look at commercial gaming operation is to look at the revenue split into thirds. One third goes to the state, one third goes to operating costs of the casino, and the final third is profit. Much of profit will be used to pay off debt and for capital investment. In the case of CSI, that final profit is then subject to the 75/25 split.

Secretary Blankenship said while profits aren’t immediately as high as tribal gaming, it’s still a tremendously valuable investment. He said that it allows the Tribe to expand its brand, develop revenue across the country, and most importantly diversify that revenue.

“You’ve got the Tribe and tribal gaming. It’s been the goose and the golden egg. There is a need to diversify away from that.  When you look at 2023 being 75 percent of casino projection for the upcoming year, that’s important. That’s a huge milestone because we’re slowly pulling back on the Tribe’s overreliance on tribal gaming revenue to support essential governmental services.”

The Indiana Gaming Commission published its annual report for fiscal year 2022 in September. It shows that Caesars Southern Indiana had a gross total win of $244,287,795. Of this, $71.2 went to Indiana state tax. This puts CSI at fifth in the state in total revenue. These figures, as well as monthly reports from each of Indiana’s commercial casino operations, are available at https://www.in.gov/igc.

Secretary Blankenship said that the acquiring of CSI was purely a financial play, and therefore the success of the property is based on profit and value of the company. To accurately generate value estimations, they use EBITDA – earning before interest, taxes, depreciation, and amortization.

“Looking at how casino properties are valued, it’s on a multiple of EBITDA. So, the Eastern Band of Cherokee Indians paid six and a half times EBITDA for Caesars Southern Indiana. We’re seeing regional properties right now trade at nine times, 10 times. We saw a property go for 12 times. We’ve seen a bid on a property go for 16 times EBITDA. If you take the low end of that valuation, nine times EBITDA would put that property at $422 million. Which is a $142 million of positive valuation growth for EBCI. Of course, that just gets bigger and bigger as you go up to 10 times EBITDA or 12 times.”

Secretary Blankenship said that now they have seen early success at CSI, they feel confident in making additional investment into the property to increase the bottom line.

“Things like changing out the old legacy Binion Steakhouse for a Gordon Ramsay Steak, which is going to open later this year. So, I think there are more opportunities for us there to tap into that Louisville market, expand that player database and bring new customers into that property. We’ve planned some capital improvements on the floor, we’ve planned some capital improvements to the hotel. The steakhouse is the first big project that is being undertaken. So, I think you’ll see more and more of that.”

Establishing the Gordon Ramsay Steak required a $5 million investment. It will be a 6,000-square foot restaurant, and they are hoping it can bring in new clientele and generate more revenue.

Caesars Southern Indiana Casino is the foundation of EBCI Holdings, which Secretary Blankenship says is already well ahead of schedule. The goal is to continue building a revenue generator that can fuel EBCI Holdings and establish the EBCI as a major player in commercial gaming. CSI will keep growing as the EBCI continues to hunt for more revenue sources throughout the country.