Blockin’ out the scenery, breakin’ my mind

It is a beautiful day. The sun is shining, and there is enough of a breeze to see what the gigantic flag across from the helicopter ride business represents. There is typically not enough wind to see anything but red. Signs are important. They may tell a story. Some speak of an affiliation that one might have with a person, community, hobby, or organization. Some are designed to let people know you want something; like a vote, for example.

Let’s talk about those.

Since I have been involved with tribal elections, signage has played a prominent role. I am not sure what impact they have had on who sits in the seats of power, but it is clear that candidates think it is a huge factor in the winning or losing of campaigns. If you are a regular user of the roundabout on Acquoni Road or any intersection on the Qualla Boundary, you are familiar with the corrugated cardboard signs. Like spring flowers in bloom, these signs show up every election season. 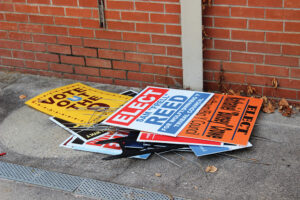 Some constituents also have an opinion as to the importance of these signs. During recent Tribal Council sessions, it was noted that some wild and crazy rebels had decided the way to “whup” the opposition was to start stealing signs. Well, maybe stealing is too strong a word. Possibly, they were just borrowing them until after the election. Reports of people driving around in pick-up trucks, jumping out, and uprooting someone’s signs are getting more common these days. It seems that there are attempts to upset the democratic process by looting signs. The thing that bothers me about who is running around stealing signs is that they are probably registered voters. What kind of person do you think they might vote for?

Back in the day, people were less likely to put a “bumper sticker” on their cars because they didn’t want to scrape their clearcoat to get that sticker off when their candidate lost or affections for that person dissipated. So, candidates didn’t invest in many bumper stickers.

Over recent years, innovators have come up with a new way to display our support for our picks temporarily. Inventive folks have developed magnetic bumper stickers. In past elections, these magnetic signs have been popular among candidates. Supporters are much more likely to be a mobile billboard, albeit small, if they can quickly and painlessly remove any sign of endorsement once the election concludes. Oddly, these magnetic shows of support range from “it’s so small I have to tailgate to read it” to “it’s as big the driver’s side door” sizes.

Some supporters choose to put two or three of the same signs on their vehicles, just to make sure you get the message while others seem to strategically place the sign in an area you are not likely to see or read it. Think about that for a minute. As a student of social science, it would be interesting to see if a man driving around with a box full of magnetic campaign signs, roaming Cherokee and randomly placing signs for one candidate on any car that had an EBCI license tag, could sway an election.

Did any of you notice the sign in the Ginger Lynn Welch (GLW) Complex building stating the 100-yard advertising limit during the Primary Election?

I know some will find this knit-picky, but when it comes to our election process, we should be. Section 161 subsection 12C states, “No campaign signs of any kind shall be allowed within 100 yards of designated polling places for a period of one week prior to the Election Date.”

There was a sign posted near the front entry bathrooms indicating that from that spot was designated 100 yards from the EBCI Election Board offices, where early voting was taking place. It would be a stretch to say that it is 100 feet from the bathrooms to that office. It may seem like a longer walk if nature is calling, but logistically not so much. There are some campaign signs out in the rear parking lot of the GLW that look like they have been pulled from the ground. They were possibly pulled up while the absentee voting was going on. Then again, the area where this pile of signs was left was within the 100-yard limit.

But, I wondered how the Election Board handled those magnetic signs. You see, the rear parking lot to the Ginger Lynn Welch is less than half the way from the Board offices than the front bathrooms. It would definitely be a “no campaign signs of any kind” zone. So, what do you do with a parking lot full of vehicles that have magnetic signs for the candidate soup? I am not sure that there is a realistic way to address modern advertising challenges to tribal elections.

I have always wondered about those billboard signs for candidates. I wondered if their campaign managers understand the logic of putting a big picture of the candidate in front of drivers when the only thing the driver who votes will see when they go to the voting booth is a name. Sadly, there are many who will go to vote for only a name that they remember from a sign. It happens in federal, state, and municipal elections. Certainly, it happens in ours.

And, it is not so much that a voter needs to associate the values of the candidate with a face. It is their names. So, no matter how pretty or handsome that candidate may be, it is highly unlikely that it will benefit the candidate in the voting booth when only a name appears on the ballot. Besides, good looks do not equate to honesty, integrity, and intelligence. Pretty and handsome people may be all of those things, but it is definitely not a cause and effect relationship. Animal magnetism should play a no, or at least an insignificant, role in our selection of leadership.

Bill Engvall, a famous southern culture comedian, made a career from a comedy routine he called “Here’s your sign.” In it, he gave an example of people doing stupid things that common sense should have told them not to do. “A couple of months ago, I went fishing with a buddy of mine. We pull this boat into the dock; I lift this big ‘ole stringer of bass. This idiot on the dock says ‘Hey, you catch all them fish?’ I said, ‘Nope. Talked them into giving up.’ Here’s your sign.”

Don’t be the idiot on the dock. You don’t need a sign to tell you how to vote. And yet, there are candidates who will count on that part of the constituency. And, before the phones calls and emails start coming, I know that it is a race and signage is a standard part of letting the voters know you are interested if you are a candidate. But, hopefully, signs do not win votes or elections…or, they shouldn’t.