COMMENTARY: EBCI tribal flag should be flown at same height as U.S. flag 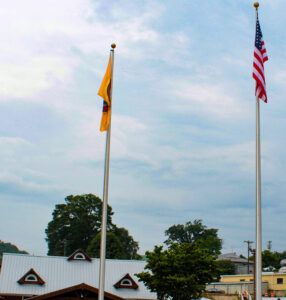 The flags of the Eastern Band of Cherokee Indians, left, and the United States of America fly in front of the Cherokee Council House on the afternoon of Wednesday, June 5. (SCOTT MCKIE B.P./One Feather photo)

The Eastern Band of Cherokee Indians (EBCI) is a proud, sovereign nation and the EBCI tribal flag can be seen flying all over the Qualla Boundary (aka Cherokee Indian Reservation) but lower than the flag of the United States.  Why?  I would like to see the flags flown at the same height, at least here on tribal land.

According to the United States flag code Section 7(g) Position and manner of display, “When flags of two or more nations are displayed, they are to be flown from separate staffs of the same height.  The flags should be approximately equal size.  International usage forbids the display of the flag of one nation above that of another nation in time of peace.”

Well, that pretty much spells it out right there.

The EBCI is a sovereign nation.  Federally recognized tribes are considered nations.  That much is known and accepted throughout Indian Country.  So, that being said, the above flag code reference would be instituted and the EBCI flag should be flown at the same height as the U.S. flag.

This is about respect more than anything.

Now, before anyone gets all crazy or infers that I’m somehow anti-American, that couldn’t be further from the truth.  I stand, take off my ever-present hat, and salute the flag each time the “Star-Spangled Banner” is played.  Every time, without exception.  Ok, enough about that.

This is something that should be instituted and encoded within the Tribe.  There is nothing in the Cherokee Code regarding the proper display of the EBCI tribal flag.  The only mention of the flag is that the Tribal Flag Ceremony, approved in Res. No. 471 (2008), shall be conducted at the funeral services for a current or former leader of the Tribe.

The U.S. flag code gives detailed instructions on how to properly display the stars and stripes, and it is time for the EBCI to have its own flag code.

The Joint Council Resolution states, “Both the Eastern Band of Cherokee Indians and the Cherokee Nation have an individual tribal flag, and each flag represents our tribal sovereignty, pride, and pursuit of self-determination…”

That resolution sums up the sentiments around the EBCI flag.  It is a representation of sovereignty, pride, and self-determination.  Thus, it should be flown equally with the U.S. flag to represent that sovereignty and to represent a proud nation.