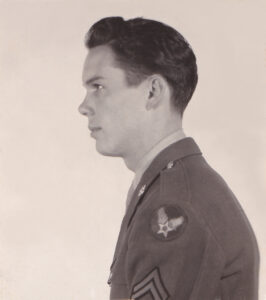 Frank William Haigler, 96, passed away after a short respiratory illness, at Sutter Hospital in Roseville, Calif., on March 25, 2020.  He was the first-born son of Don and Cora Haigler’s 12 children.

Frank was a member of the Eastern Band of Cherokee Indians and an alumnus of the Boarding School in Cherokee.  He was ambitious and wanted to expand his horizons so in 1940, at 16 years old, he went to “radio school” in Asheville.  After training, he joined the Merchant Marines.  World War II had begun and Frank, as the military took over the Merchant Marines, became part of the Maritime Service.  From there, Frank was sworn into the Army Air Force for the duration of the war.

During this period, Frank became an aircraft flight control tower operator and after the war, he continued this profession in civil service, retiring in 1983.  Additionally, Frank was a multi engine aircraft pilot.  After retirement, while living in Middletown, Calif., a fire burned his community, so he relocated to Lincoln, Calif., closer to his children and grandchildren.

Frank was preceded in death by both his parents and two sisters, Betty and Evelyn.  Also preceding him in death were six of his brothers, Leroy, Robert, Edward, Ronald, Eugene and William.  Surviving Frank are his sister, Mary Lou Salter of Richmond, Ky., and two brothers, Tom of Bryson City, and Larry (Melba) of Cherokee.  He is also survived by his children, Cheryl, Ronald (Beth), and Patty.  He has eight grandchildren, Natasha, Christopher, Amanda, Lisa, Jodi, Matthew, Jeven and Jason, and 11 great grandchildren.

Frank was active asset in his community, involved in the Lion’s Club and the Senior Center.  He was proud of his community and the USA and enjoyed being an “ambassador at large” for the EBCI and all Native Americans. He was of good heart and spirit and was the perfect host to friends and family. He enjoyed riding his scooter around the neighborhood, picking up the mail, talking with his neighbors.  He lived a long and blessed life and thanked God for his bountiful blessings.  We will all miss him and cherish our memories with him.

Due to the Covid-19 pandemic, Frank was interred without ceremony.  The family will have a memorial service at a later date.