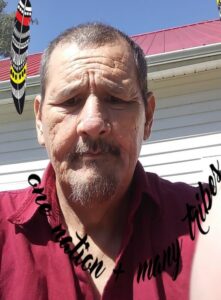 Billy Joe Lossie Sr., 57, from Cherokee, who has made his home in Oliver Springs for the past several years, went to his heavenly home on May 12, 2020 while surrounded by his loved ones. Lossie has always said his greatest accomplishment in life were his children, whom he spoke of daily.

Billy was a mason most of his life. He loved to fish, he loved to make Native American Crafts, watch any sport but especially Nascar (where he would cheer on in his opinion the best car, #48) and spending time with his friends and family.

Lossie is proceeded in death by his wife, Kina (Slugg) Lossie; his parents, John Henry and Willa Mae Lossie; and a brother, Jerry Lee Lossie.

A special thank you Amedisys Hospice for their assistance in Billy’s final days.

The family will have a private graveside service for Billy Joe Lossie Sr. on Saturday, May 16 at 12 p.m. at the Lossie Family Cemetery in Piney Grove. Pastor Roger Roland will be officiating. Pallbearers will be Sonny Sneed, Nunnie and Jack Davis, Travis Lossie, Fonzi Sneed, and Dustin Wolfe.