Go online and look at a map of all the local chiropractors. There are three in Sylva alone, and dozens in Asheville.

Chiropractic care is something that is more than commonplace in most towns and cities. Zoom in on Cherokee, and there’s not a single private chiropractor. This is something Dr. Eric Shapiro and his wife, Beth Lingerfelt, slowly started to realize.

“There is one, we hear, in the hospital. But, there is quite a waiting list, evidently,” said Shapiro.

They say they were simply shocked. Considering how many chiropractors are in any given city, they had just assumed they were everywhere.

“I said ‘let’s do this together,’” said Lingerfelt.  “Because I very firmly believed in his abilities as a chiropractor, and I felt like he needed his own practice again. But, I didn’t want to do a brick and mortar again, because they’re like on every corner. So, I said ‘let’s do something different.’ I feel like everything is moving towards convenience, anymore.”

When they started the operation, they knew they wanted to focus of getting offices on board with their idea instead of just going house-to-house. They wanted to see more than one or two people at a location.

“Me being a nurse practitioner, I’d worked in long-term care facilities before. So, I started just kind of cold calling and just going around in western North Carolina…I knew that their bigger problems were retention of staff. That’s kind of how we got our steam going, starting in skilled nursing facilities and assisted living facilities all over western North Carolina. As sort of a tool they’re using for retention, to take care of their employees.”

A big driver for the business is the price point. They offer adjustments for just $25, and Shapiro says it’s about half that of brick and mortar chiropractic. That price comes directly from the fact they don’t have a permanent space. 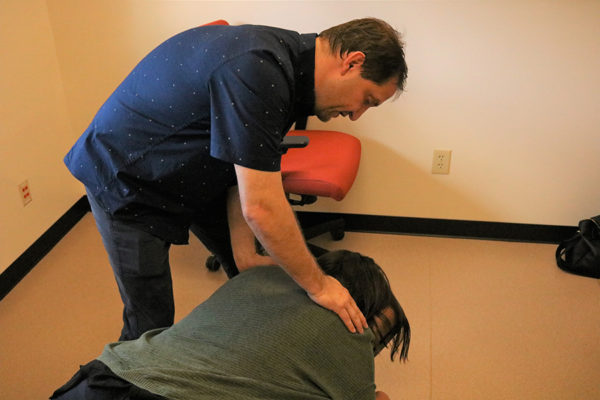 Dr. Eric Shapiro, of Your Place or Spine?, evaluates a client. His mobile chiropractor service is gaining popularity in Cherokee and the surrounding area. (JONAH LOSSIAH/One Feather photo)

“This business model is awesome because we have no overhead,” said Shapiro.

“I have a table that I purchased and paper towels. We don’t have building insurance and employees. Doing insurance takes a lot of work. We don’t do insurance.  We’re totally cash.”

They said it worked like a domino effect. Once a few groups started using their services, they met more people and found new places to do business. This is what happened in Cherokee.

“We had an overwhelming response at the police department, and everyone knew someone else,” said Lingerfelt.

Travis Brooks, a patrol sergeant with the Cherokee Indian Police Department, has been going to different chiropractors for years, but recently couldn’t go because of distance.

“I was actually having some pretty serious pain in my neck and shoulders from most likely carrying a lot of extra weight from the belt and vest,” said Brooks.  “I was kind of made a believer after the first time it was alleviated, he dug pretty deep on what the problem areas were and concentrated on that.”

Word started to spread. They took their business to family safety, then the Ginger Lynn Welch Complex. Now, they have a schedule and are gaining regulars each time they come through.

The main reason that Shapiro and Lingerfelt came to Cherokee has turned out to be one of the challenges. With no chiropractors being around, many people in the area don’t know anything about the benefits of chiropractic care.

“It’s all education, really,” said Shapiro.  “I’m a traditional kind of chiropractor. I am not one that goes to the far left. I think western medicine and chiropractic can work in concert together. Medicines are needed, but they’re overused. They don’t fix anything. They don’t’ fix a problem. They just get you to where you have a better quality of life temporarily, but then your problem is still there.”

Brooks says that some his coworkers needed some convincing before they went to see Shapiro.

“One of the detectives who’s not really a believer and not real big on any alternative medicine or anything of that nature…I explained to them that I’ve been going off on, it would’ve been more consistent had it been more available, for the better part of two decades, now…he finally made it in with a nagging injury and more or less has become a believer himself.”

Your Place or Spine? travels all over the region: Sylva, Bryson City, and even Buncombe county.

Though Cherokee started as a bit of an experiment, they say the rapport that they have established in the short time they have been coming is encouraging, and they hope to come even more frequently now.

Currently their objective is more focused on wellness than treating significant issues. Shapiro says that for major problems, there are plans where you see a chiropractor three times a week. But right now, they are only coming to the boundary every two weeks.

“We’re trying to teach people – don’t wait. You don’t have to be in pain to see a chiropractor. It’s not about pain, it’s about fixing problems…if I were to be here more frequently, I could be able to treat more active problems,” said Shapiro.

Given that they are mobile, Shapiro and Lingerfelt insist that if there any questions regarding their business, contact them directly. You can reach Dr. Shapiro at backcrack29@gmail.com or calling 828-808-9487.

Though this is a business, Shapiro and Lingerfelt say that they are most excited about what they can offer the Qualla Boundary, and just how receptive Cherokee has been to the treatment.

“[The Cherokee people] have something really special here, and I just wish that a lot of the world had that kind of feel of community and helping each other that you all seem to have that the rest of the world has kind of left that in the dust.”