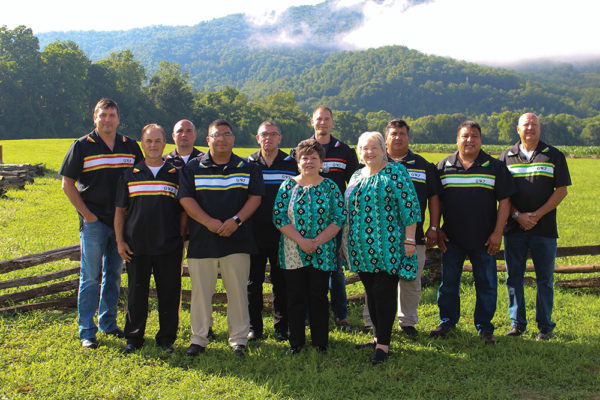 Roy Boney Jr., a Cherokee Nation citizen and renowned artist, has been working on gathering signatures in the Cherokee Speaker Roll Book, an archival document featuring first language Cherokee speakers alive today.  “For years, everyone has always been asking, ‘how many Cherokee speakers do we have?’  And, they’ve really just been guesses.  It’s as high as 10,000; as low as 500.  So, to really find out how many we have, we started conducting a survey…”

Events have been held in Oklahoma whereby Cherokee speakers could sign the Speaker Roll Book and receive a commemorative medallion.  Locally, an event was held at the New Kituwah Academy on the evening of Wednesday, June 26, and a subsequent event was held the following day in the Snowbird Community.  “At the moment, we have about 2,100 names,” he said, “and, that includes all three Cherokee tribes represented here.”

Boney Jr. added, “The most recent count has 1,991 western Cherokee speakers and 211 Eastern Band Cherokee speakers.  Out of the roughly 400,000 federally recognized Cherokees, that’s less than 0.005 percent of the population…the language is our birthright as Cherokees.  We’re at a really critical juncture with our language.” 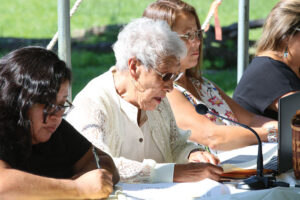 It was decided that a Steering Committee, with representatives from each of the three tribes, would be formed to help carry out the intent of the resolution.

Also during the meeting, Tri-Council Res. 01-2019 was passed which calls for the federal government of the United States to issue an apology “for the wrongful, hurtful wrongdoings that were imposed” on Cherokee ancestors.  It also was passed unanimously.

Tribal Council Chairman Adam Wachacha welcomed everyone to the event and stated, “This event is very important to us as Cherokees.  An historian told me that this (KItuwah) is where it all began for the Cherokee.  This is where the clanship was first established.”

He added, “Cherokees have a long history here at the Kituwah Mound where it all began…it touches my heart to know that we were able to get this established and this wonderful weather that’s been provided to us today.  I hope that everybody’s enjoyed themselves this week.  I know we have.” 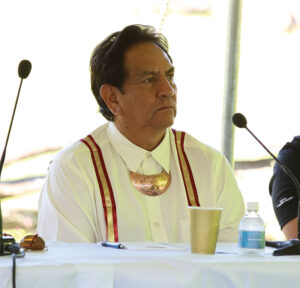 Principal Chief Richard G. Sneed and Vice Chief Alan B. Ensley presented gifts to the executive leadership of the Cherokee Nation and the United Keetoowah Band.

Cherokee Nation Principal Chief Bill John Baker commented, “I feel welcome coming back home.  It’s almost like a religious experience every time that we come.  We feel the spirit of our ancestors, and your hospitality adds to that.  We know that we belong here even though maybe our families have been gone for 180 years.”

United Keetoowah Band of Cherokee Indians Principal Chief Joe Bunch said, “I certainly look forward to the opportunity to return the hospitality and the friendship.  For the past three days, it’s been very hard work…on behalf of the United Keetoowah Band, thank you.  Thank you for the many opportunities and the hard work that you do – the leadership as Council for our great nations.  There’s so much that depends on you.”

Stephen Yerka, EBCI Tribal Historic Preservation Office, gave a brief history for the crowd of Kituwah.  “Even though the three Cherokee nations are separated geographically, you all are of one people – one people together in spirit.  When you gather here, and when Cherokee people come together, great things happen.  I think this Tri-Council is a good representation of that.”

He added, “Under our feet here walked thousands of people stretching back at least 15,000 years on this site here – Cherokee people here living, working, eating, doing ceremonies together.  This site is the most sacred of all mother towns – the beginning of the clan system, the sacred fire belong here.”

The 2020 Tri-Council meeting will be hosted by the United Keetoowah Band.  A date and location will be announced soon.

To view or purchase photos from this event, visit: https://onefeather.smugmug.com/COMMUNITY-and-NEWS-EVENTS/2019-Community-Events/Tri-Council-Meeting-at-Kituwah-June-27/