President Donald J. Trump announced on Tuesday, June 25 his nomination of E. Sequoyah Simermeyer to the position of chairman of the National Indian Gaming Commission (NIGC).  Simermeyer, a member of the Coharie Tribe – a North Carolina state-recognized tribe – currently serves as an associate commissioner on the NIGC and is the current director of self-regulation.

Secretary of the Interior David Bernhardt praised the nomination and said in a statement, “Sequoyah Simermeyer has a wealth of experience on tribal issues working in different executive and legislative branch capacities.  He is the ideal candidate for this position, and I urge Congress to confirm him quickly.” 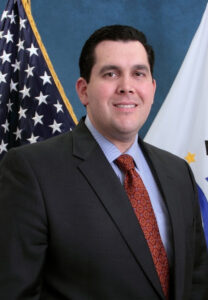 E. Sequoyah Simermeyer, a member of the North Carolina state-recognized Coharie Tribe, has been nominated by President Trump to the position of chairman of the National Indian Gaming Commission (NIGC). (DOI release)

Sen. John Hoeven (R-N.D.), Senate Committee on Indian Affairs chairman, echoed the Secretary’s comments, “Mr. Simermeyer has years of experience that qualify him for NIGC chair including serving as counselor and deputy chief of staff to the Department of the Interior’s Assistant Secretary for Indian Affairs, as counsel on the Senate Committee on Indian Affairs, and presently as associate commissioner of the NIGC since November 2015.  We look forward to hearing about Mr. Simermeyer’s vision for the NIGC during the confirmation process.”

If his nomination is confirmed, Simermeyer would serve a term of three years.  His nomination comes a little more than a month after the May 15 retirement of Jonodev Osceola Chaudhuri from the position.

Chaudhuri, a citizen of the Muscogee (Creek) Nation, said in May, “The Commission works with tribes to ensure they have the tools necessary to effectively regulate their operations and meet IGRA’s (Indian Gaming Regulatory Act) requirements.  As I reflect on the initiatives of NIGC during my time at NICG, we have been able to protect the integrity of Indian gaming, expand outreach, and develop new services that support gaming operations and its staff.”

Information from the NIGC states, “The NIGC has jurisdiction over 512 licensed gaming establishments operated by 246 Indian tribes in 29 states.  In FY 2017, tribal gross gaming revenues were approximately $32.4 billion.  The NIGC currently has roughly 114 full-time employees in seven regional offices with an annual budget of $25 million in FY 2019.  The NIGC budget is funded through fees paid by tribal gaming operations and can be up to 0.080 percent of gross gaming revenue pursuant to the Indian Gaming Regulatory Act.”

Simermeyer has a Bachelor of Art degree from Dartmouth College, a Master of Study degree in environmental law from Vermont Law School, and a Juris Doctor degree from Cornell Law School.