His coffin draped with the flag of the Eastern Band of Cherokee Indians (EBCI), the Tribe and community that he loved and served for over six decades – Ray Kinsland was remembered at his funeral service on Monday, June 17.  Hundreds packed the Chief Joyce Dugan Cultural Arts Center on Monday morning to honor and pay their last respects to a man who dedicated his life in service. 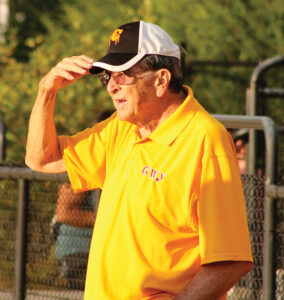 Raymond Eugene Kinsland, 84, passed away on Thursday, June 13.  Known throughout the Cherokee community as the general manager of the Cherokee Boys Club for over five decades, a staple at Cherokee Central Schools events, and a community leader, Kinsland dedicated his life to the betterment of the EBCI, especially the youth.

“As I reflected upon the many years of interactions that I had with Mr. Kinsland, it was always funny because I would call him Mr. Kinsland and he would say, ‘it’s just Ray’, said Principal Chief Richard G. Sneed who spoke during the event.  “I thought about those characteristics that best described him.”

He went on to describe Kinsland as a leader and said, “Although it is true that Ray was a great business and community leader, guiding the Boys Club for over half a century, perhaps the greatest leadership role was as a husband and a father.” 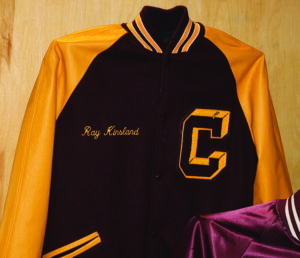 The lobby of the Chief Joyce Dugan Cultural Arts Center contained a display of some of Kinsland’s memorabilia including this Cherokee High School letterman’s jacket.

Monday’s service was opened with a prayer by Pastor Jim Park followed by the reading of Kinsland’s obituary by his grandson, Brennen Foerst.  The Primitive Quartet, longtime friends of Kinsland, provided music throughout the program.

Pastor Park, who was friends with Kinsland since the 1970s, said during his message, “What a joy it has been all through the years to have met this friend.”

He praised Kinsland’s dedication to the community as well as the church.  “Ray Kinsland was an extraordinary man.  The word extraordinary is made up of extra and ordinary; extraordinary, beyond ordinary, not like the ordinary, natural man.  He had natural talent.  He was good with numbers.  He had a good memory.  He remembered everybody and everything.  I believe he and Jerri have been in every house on the Reservation…Ray was amazing; unnaturally positive, unnaturally encouraging, never judgmental, and full of wisdom.  He kept his word.  He would counsel you and keep it to himself.”

Pastor Park told of the last time he saw Kinsland in church.  After the service, Pastor Park went up to Kinsland who leaned in and said in a whisper, “Do you need anything?”