To say that the circus is a family tradition for the Vazquez family would be an understatement.

Jonathon Vazquez, whose Los Moralitos Circus is coming to Cherokee June 21-23, is a fourth-generation circus performer. He says that the story he’s told is that his great grandfather was abandoned as a child, and that a circus took him in. He was raised in the circus and did it all his life. When he had kids, they were raised in the circus as well. This has continued onto Jonathon, who also has kids that perform in the circus. 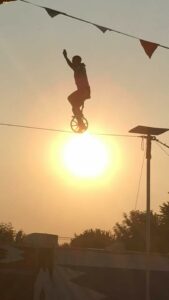 The high-wire act is just one of the many of the Los Moralitos circus which will have six shows at the Cherokee Indian Fairgrounds starting Friday, June 21 and spanning the weekend. (Photo contributed)

This is just in the United States. His uncles also run one of the biggest circuses in Mexico, El Circo Mas Grande Y Famoso De Mexico.

He started the Los Moralitos Circus in January 2016 and has been travelling the country doing show ever since. Vazquez says it’s what gives him life.

“It’s a dream come true,” he noted.  “I believe that every circus person, at one point, has the dream to have their own circus. We’ve been fighting to do this for a long time, me and my wife.”

Vazquez and his circus will span the United States this year, hosting their shows in Georgia, Minnesota, Iowa, California, and more.

Even though it is his passion and a family tradition, Vazquez almost gave it up years ago.

“I tried getting out of circus once, because my parents wanted to give us the option to study and pursue something else,” said Vazquez.

“It was the worst thing I could ever try. I honestly feel a little bit like a superhero. I can kind of amaze people and show my talents, risk my life every day. And I get to travel for free, pretty much. My business gives me money to travel all over the country and show my talents. I see the circus life as a major blessing to me and my family.”

Vazquez says that attendees in Cherokee can expect 10 to 12 acts, including: The Wheel of Death, a 20-foot high-wire, clowns, and more.

This is the circus’s first visit to Cherokee, and it is part of the Eastern Band of Cherokee Indian’s (EBCI) effort to revitalize summer events. Cherokee has a long list of shows and events planned, and June is marking the true kicking-off point.

“We’ve seen an increase in our overnight stays, and our levy has taken a bump,” said Chris McCoy, EBCI director of Communications and interim director of Destination Marketing.

This summer series is just now truly getting underway.

“We’re ready to rock and roll.  We have everything in place to make sure this summer we’re adding some excitement,” said McCoy.

All the events will be held at the Cherokee Indian Fairgrounds, and the Los Moralitos circus shows will run about an hour and a half. Tickets are $13 for adults, $7 for kids ages 6-17, and free for those 5 and under.

The circus will have a total six shows starting Friday, June 21 and spanning the weekend. There will be one show that night, three on Saturday, and two on Sunday.

Other information and tickets can be found at https://visitcherokeenc.com/events/detail/los-moralitos-circus/.