Jorge Perez carries a bag of fruit to a customer’s car, a wide smile as he goes.

A watermelon, some ingredients for dinner, and maybe a few pieces of produce Perez threw in free-of-charge. Money isn’t what makes him happy, anyway. It’s makes life easier, sure. But if you ask Perez, the people around you matter a whole lot more than the change in your pocket.

His produce stand, which sits right across the road from Food Lion, has been growing over the past two years. A big part of what has made Perez successful is his attitude. He says that one of the most important things to him is making others happy. Whether it’s joking around or helping to carry your groceries, he just wants people to enjoy coming to his stand.

“In this business, if you have problems you leave it at the house,” said Perez.

Perez is establishing himself in the area but has been working in this region for nearly 17 years.  He first came to North Carolina at the age of 14 with his siblings and his parents. Originally from just outside of Tampa, Florida, his family would travel and work seasonally at different farms across America.

They started working with William Shelton at Shelton farms, and worked there every year seasonally for 15 years.

“Man, that’s one of the best people that I know,” said Perez.

After eight years of working with Shelton, Perez had more than proven himself. Shelton asked if he would take on more responsibility by becoming a crew manager for him, and Perez accepted the job. For years, Perez travelled the country with his crew.

As Shelton Farms grew, so did Perez’s responsibilities. When the farm opened a packing house in the area, William Shelton asked Perez to manage it.

“He’s a hard worker, he’s ambitious, and he’s driven. To the point where if I had a concern it’d be that he overworks,” Shelton said with a chuckle.

Perez has continued to grow his own brand as well. He is a seller and major contact for Shelton and knows a lot of the buyers in South. Shelton isn’t the only farm he works with, either. He helps the other two major tomato farms in the region with Darnell and Cochran farms as well. He also supplies produce to most of the restaurants in this area.

Two years ago, when Perez first started selling produce himself, there wasn’t much of a plan. He started small.

“Last year it caught me off guard. Because I just had my truck and trailer and I just decided to park on the other side of the gas station, and Mr. Ralph Henry he asked me, ‘why don’t you set up a stand?”

Perez said that it seemed too good to pass up and had to take up the offer. It was slow at first, just offering what he had. As more locals started to come and he established a financial base, he was able to add pieces to the stand.

An initial challenge for Perez was adapting to the local produce. People would request things like ramps, something he had never heard of until coming to Cherokee. 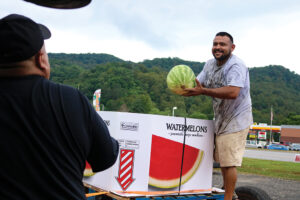 Perez tosses watermelons to a co-worker as they stock his stand.

“The local people, they want what they want, and I try to please everybody.”

He was learning a lot about the Cherokee people through their food and how they interacted with him. At the same time, he was able to bring new ideas into the lives of a lot of people. He says that he’s met a lot of locals that had never eaten fruits like fresh mangos or yellow-meat watermelon, and that he loves sharing new things with people.

Perez says the locals have made him feel welcome in the community.

“Seeing how I’ve fixed it from nothing to where I have it now, a lot of people compliment me on that, and it makes me feel good. I do work a lot on it, and I always try to have it top-notch. Because I want it to be different. I want it to be like, ‘man, I want to go back to that produce stand.’”

It’s the little things, too. This year Perez put in a cement floor to replace the gravel, he says he did it to make it easier for the elderly folks that come to his stand.

Perez says he’s focused on the next step, and, most importantly, he is happy with where he is in life.

He still works with his brother and sister. His brother has taken over most of the crew management duties, and Jorge has been able to focus on all his other ventures.

Family is the first priory to Perez, and he says that he still takes time to visit his home in Florida and family in Mexico. He also says that he loves what he does and that this area has been an important part of what has made him who he is today. After 15 years of traveling the country and working season to season, he’s made a new home.