The fall 2019 recipient of the Ucross Fellowship for Native American Visual Artists is a member of the Eastern Band of Cherokee Indians (EBCI).  Noted EBCI multi-media artist Luzene Hill received notice recently that she received the Fellowship which will include a one-month residency at Ucross, a 20,000-acre artist ranch in Wyoming; a stipend totaling $2,000; and she will be exhibiting in the Ucross Foundation Art Gallery next year.

“I was surprised, then super excited!” said Hill of her reaction upon hearing the news. 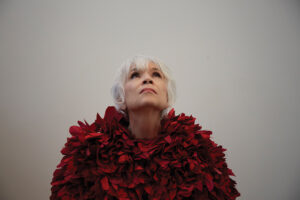 Luzene Hill, an EBCI tribal member, has been named a fall 2019 recipient of the Ucross Fellowship for Native American Visual Artists. (Photos courtesy of Luzene Hill)

She said she was encouraged to apply for the Fellowship by her friend Brenda Mallory, a Cherokee Nation citizen living in Portland, Ore., who did a residency the year before at Ucross.  “This is a new initiative by the Ucross Foundation which has been running a residency program for about 35 years.  I’m very grateful for the opportunity to work in a focused and intense way and grateful for the new program for Native American artists that will continue to benefit Native artists in years to come.”

Hill related that in each residency session (fall, spring) there are four visual artists who are provided a private studio, four writers, and two musicians.

She starts her residency in mid-August and will be working on new projects.  “Right now, my plan is to create a new series of drawings.  I’ve been working primarily on multi-media conceptual installations for several years and drawing only occasionally.”

Hill will work with a curator at Ucross to decide which pieces will be exhibited at her show next summer.

Her work is stimulating to both the eyes and the mind.  “The message that is increasingly dominant in my work is female strength and empowerment.  Being at Ucross and showing my contemporary work there will, I hope, emphasize that Native Americans are not historical stereotypes, but are modern people living in today’s world.”

She is known worldwide for her interesting and thought-provoking visual arts.  Two years ago, she had an installation, entitled “Enate”, at the Portland Art Museum in Portland, Ore.  Part of a larger exhibit entitled “Connecting Lines”, the installation addressed the serious issue of violence against Native American women as well as tribal sovereignty issues. 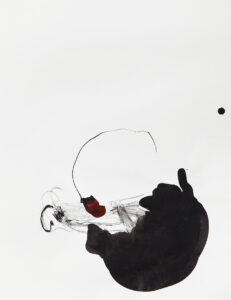 This untitled piece is one of Hill’s latest works.

Ucross President Sharon Dynak commented on Hill’s Fellowship selection, “Ucross is honored to welcome Luzene, a bold and boundary-breaking artist, for a residency this fall.  Wyoming’s High Plains have a deep history of Native American culture, and we’re thrilled that Luzene will be able to create and exhibit her work here, through this new fellowship initiative that is so important and meaningful to us.”

Always working and thinking of new projects, Hill noted, “I’m beginning work on a new installation for a group show in Tuscon (Ariz.) at the Museum of Contemporary Art.  That show, titled ‘Nepantla: Feminism in Indigenous and Latinx Art’, will be on exhibit October through December of 2020.  The new work is expanding on motifs and concepts I worked with for ‘Enate’, which include earliest female figures as depicted in small sculptures from the Valdivia area of coastal Ecuador, concepts of matrilineal culture and empowerment.”

Hill has been recognized near and far for her art and was named a 2016 NACF (Native Arts and Cultures Foundation) Fellow as well as receiving an Eiteljorg Museum Fellowship and First Peoples Fund Fellowship in 2015.

Ucross officials noted, “Major support for the Fellowship has been provided by the Andy Warhol Foundation for the Visual Arts.”