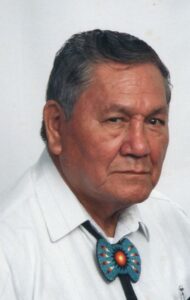 James Leonard (Blue Jay) Sequoyah Sr., 83, a lifelong resident of the Yellowhill Community, was called home to be with our Lord on June 8, 2019 and to join his beloved wife, Alice, of 54 years. Bluejay had battled a long illness and was in his home when God called him.  He received faithful, loving care from Christine, who was always there to assist Dad with his daily routines.

Blue Jay was a graduate of Cherokee High School and married Alice Maney Sequoyah.  Blue served in the U.S. Navy in the early years of their marriage. They raised strong sons and daughters in a Christian home.  Blue began his ministry serving Christ for several years at Waterfalls Baptist Church, and Alice served as the treasurer and Children’s Sunday School teacher.

He was the machinist at the Vassar plant for many years, and he later worked at the Occonaluftee Indian Village for several years as the Square Grounds guide and educator.  He then joined the Great Smoky Mountains National Park Service in the Facility Management Department until he retired to care for Alice when she became ill.

He was raised in the Yellowhill Community and was a member of his home church, Yellowhill Baptist Church. Blue Jay also fellowshipped with many Churches and visited wherever the Lord called him to go, including many, many visits with our people in hospitals all over the area.