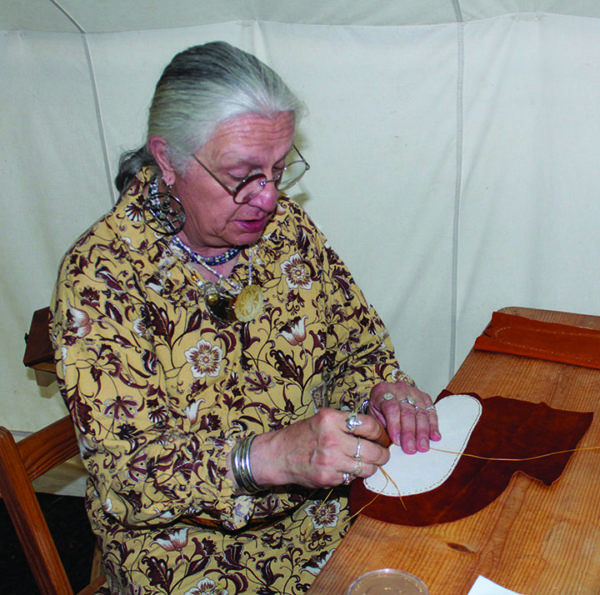 Richard Saunooke, a member of the Eastern Band of Cherokee Indians and a Cherokee Friend, is shown making Cherokee pucker-toe moccasins at the 22nd Annual Cherokee Voices Festival at the Museum of the Cherokee Indian on Saturday, June 8. (SCOTT MCKIE B.P./One Feather photo)

“We’ve really been working on trying to enhance their individual and personal development,” said Dakota Brown, the newly-hired Cherokee Friends coordinator and Museum of the Cherokee Indian tribal liaison.  She noted that the program was previously housed in a different tribal department and came to the Museum in April 2015 through a Cherokee Preservation Foundation grant given “to revitalize the Cherokee Friends program”.

“Previously, when it was housed under a different department, they were just out in the community talking to the tourists,” said Brown who noted that the Cherokee Friends no longer walk around town answering questions from the tourists, but are stationed in various places or at the Museum.  “The Museum made sure that they have a large amount of cultural and historical knowledge.”

The Cherokee Friends are expected to not only know about culture and history but also be able to demonstrate many facets of the arts and lifeways.  They often take classes at the Museum on various subjects including pottery, basketry, fabric arts, metal work, and several upcoming classes will have them delve into wood carving and traditional fishing techniques.

“I see the Cherokee Friends program really booming with the new support from the Tribe’s Commerce Division and the backing from the Cherokee Preservation Foundation,” said Dawn Arneach, Museum executive assistant.  “With more Friends in the program this year, they are more diverse and that increases the offerings of what guests can see while visiting the Museum.  We can share basketry, moccasin making, twining, pottery, carving, etc.  Each Friend has a special Cherokee talent that they demonstrate.”

Arneach said the Friends are expanding not only their knowledge but their reach as well.  “They are now sharing their knowledge and educating several universities in western North Carolina over the next few months.”

She said the classes that the Friends take will be beneficial for the Museum as well.  “They are getting hands-on workshops on Cherokee crafts that they may become more proficient in doing and, in turn, we will now be able to host our own workshops without needing to hire someone else.”

Thompson and Maney are newer to the program and Brown is happy about their contributions, “It’s nice to have the ladies in the program,” said Brown, “so they can demonstrate women’s roles in Cherokee society and culture.”

Maney commented, “It’s good to have a woman’s representation because originally we were a matriarchal society so it’s good to get that female perspective.  Also, our style of clothing is different from the men and some of our roles were different.  So, when tourists ask us questions about that we can give them our perspective and not just a man’s perspective on Cherokee culture.”

Saunooke, a noted Cherokee pucker-toe moccasin maker, frequently demonstrates his art at the Museum as do other Friends who specialize in certain arts such as pottery or basketry.  “This is a big benefit to the people coming in the door as they have somebody there who can explain things to them.  They have somebody actually there.  Many times they comment that this was ‘the most wonderful idea’ to show a live person rather than just reading things on a wall.  It’s a big benefit.”

Arneach said the Friends are helping the Museum to meet goals outlined in its mission statement – To Preserve and perpetuate the history, culture, and stories of the Cherokee people.

“The Friends are doing that,” she said.  “There seems to be new life in the program, and it feels like people away from Cherokee know this.  The Friends are booked almost every week now sharing programs both at the Museum and in other locations.”

Brown said, “Our hope is the Cherokee Friends program will continue to grow.  We will hopefully be up to eight by the end of the month, and my hope is that that number will grow in the future.”

For more information about the Cherokee Friends program, visit: https://www.cherokeemuseum.org/learn/cherokee-friends