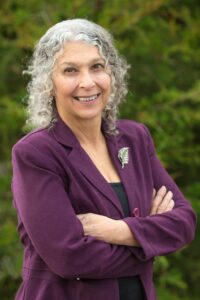 Author and curator Anna Fariello was given a Lifetime Achievement Award at the Folk Art Center during the annual meeting of the Southern Highland Craft Guild recently. (Photo contributed)

Author and curator Anna Fariello received a Lifetime Achievement Award at the Folk Art Center during the annual meeting of the Southern Highland Craft Guild recently. Founded in 1930, the Guild represents over 1,000 craftspeople in nine southeastern states.

Fariello was cited for her work at Western Carolina University where, as an associate professor, she developed the online “Craft Revival” archive. She is currently working with Blue Ridge National Heritage Area to develop the Blue Ridge Craft Trails, a project identifying and showcasing western North Carolina craft makers. She began her work in craft as a potter, but her interest in documentation and exhibitions led her into a museum career. In 1999, she was named a Smithsonian Fellow as the James Renwick Fellow in American Craft.

Her textbook, “Objects & Meaning: New Perspectives on Art and Craft”, published in 2003, was one of the first books that looked at the history and theory behind craft practice, not just its how-to nature. She went on to write the “From the Hands of our Elders” series, three books on Cherokee arts and crafts. Her many book chapters and articles include ‘Lexicon of Studio Craft’ in “Craft and Contemporary Art”. In 2018, she published “Craft & Community”, an early history of the John C. Campbell Folk School.

Since 1990, she curated over 30 exhibitions for museums and organizations, almost all focusing on American craft. “From Hand to Hand: Functional Craft” was exhibited at Handmade in America in Asheville; “Iron: Twenty Ten” at the National Ornamental Metal Museum in Memphis; and the touring exhibits “Movers & Makers: Doris Ulmann’s Portrait of the Craft Revival” and “ReFormations: New Forms from Ancient Techniques”.