EBCI member is a lead designer at Tesla 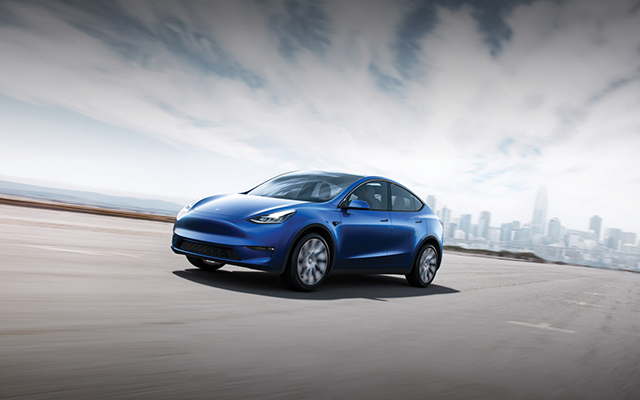 Jacob Saunooke, an EBCI tribal member, was instrumental in the design of the Tesla Model Y. (Photo courtesy of Tesla)

Jacob Saunooke, a member of the Eastern Band of Cherokee Indians, applied for his job like many do these days. He saw a posting online and threw his name in the hat.

Saunooke had finished up his graduate degree in architecture at the University of South California and was feeling pretty good about himself. He had been working with an architecture company in the San Francisco area and was searching for what exactly he wanted to do. So, he shot for the stars. This job opening was as a designer for Tesla, with the official title being A-Class Exterior Surfacer 1.

The first challenge he faced was patience. Tesla left him waiting for almost nine months before he got the call.

“I’d totally forgotten what I’d applied for…I was sitting in rush-hour traffic thinking to myself ‘man, how cool is this,’” said Saunooke.

“Being an automotive designer has always been my dream job, and it’s funny how it just kind of happened.”

He was officially a candidate for the job. For this position there was a month and a half trial period for him and 11 other looking to earn a position. Those 12 were picked from 1,500 applicants, and that list was eventually trimmed to just four. Saunooke said that Tesla had around 500,000 applications across their company that year.

“If you’re into doing innovative work, there are really only a few places you can do that in the automotive industry.”

Saunooke’s first official day was May 11, 2015, more than a year after he had originally applied for the job. Although there was a lot of pressure, he says one of the hardest things he had to do was be away from his wife, Jenna, who was going to Berkeley Law School. He initially thought the job might be at Tesla’s Factory in Fremont, Calif., which is just down the road from Berkeley, but it turns out they wanted him in Los Angeles.

“We did that for a little over a year. We had just gotten married that summer too. So, we got married and I moved out to a different city, and that was really hard. Every other week I’d drive up for the weekend. I’d leave work at five and get there around midnight, and Sunday I’d do the same thing.”

This was a difficult stretch for Saunooke, who began to second-guess himself. His father, Robert Saunooke, remembers when his son called him during this time.

“He was uncertain. He loves his wife very much…he talked to me about quitting and leaving Tesla and trying something else. I said ‘Dude, stay at Tesla. They like you’,” said Robert Saunooke.

Jacob listened to his father and decided to request a transfer to an office closer to Berkeley.

“My priorities are always family. They always have been. In my mind, if they wouldn’t have transferred me I would’ve said ‘alright, I have to be with my wife,’” said Saunooke.

Fortunately, he persevered and solidified himself on the Tesla design team. At first, he worked on some of the smaller aspects of the cars, such as the door handles, cameras, and mirrors.

In less than three years, Saunooke worked his way all the way up to the head of exterior design, officially a Senior A-Class Stylist.

The Model Y, which launched this year, was the first car with Saunooke in this role. Though it’s been a rather quick progression, it’s come from a lot of hard work. He says that it is a pretty casual work environment, but that he consistently has worked 60-70 hour weeks over the last year getting this model released.

Saunooke says that one of the most important things for him is that he enjoys his work, and that it has never felt like just another job. He says that part of what makes Tesla different is Elon Musk himself.

“A lot of people in the studio hate it, but I actually kind of enjoy it. He’ll come in on a Friday…and he’ll look at what we have, and he’ll do a complete 180 and say the car looks like this but now it has to have seven people in it…it keeps you on your toes and it keeps it fun.”

After the completion of the Model Y project, Saunooke has been able to step away from work for a couple weeks. Not for normal time off, either. He and his wife, Jenna, just had their first child.

“We’re buying a house out here in Los Angeles, which is exciting. We’re reorganizing our life around this guy. It’s funny, when you have a kid, family comes from all over. So, it’s nice to have people come out and connect with you again in a different way than before.”

Life couldn’t be moving much faster for Saunooke at the moment, and he says that family has helped keep him grounded. Along with his wife and new son, his father finds time to visit him in Los Angeles.

There are also pieces that connect Saunooke to Cherokee. Though he has never lived on the Qualla Boundary, his father says that he made sure his sons knew the value of their culture.

“My grandmother always said, ‘never forget where you came from.’ And I’ve told that to all my kids. No matter how wealthy you are or where you’ve been or what you’ve done, your humble beginnings are really what connects you to everybody,” said Robert Saunooke.

Their family carries a lot of history. Chief Osley Bird Saunooke is Jacob’s great grandfather. Robert was the EBCI Tribal Attorney and was recently named the president of the Native American National Bar Association. Robert’s father, Osley Bird Saunooke Jr., was the first director of the United South and Eastern Tribes (USET).

Knowing all that, Jacob Saunooke listens to his father. He says that he tries to find time at least once a year to visit Cherokee, and that he feels that he’s always belonged. He keeps his enrollment card in his wallet, and if it ever happens to get chilly where he is, you might see him with a Cherokee beanie on his head.

Robert Saunooke says the one question he doesn’t ask Jacob is “what’s next?”

“I don’t know what he’ll do, but I know that based on his track record so far, I fully expect that he will invent something or develop something that going to revolutionize cars or something. Some part of the world, that’s how he thinks.”

Jacob Saunooke has one patent already, that being a hydrodynamic surfboard fin.

He says that he doesn’t plan on leaving Tesla anytime soon, and right now he is focused on his family. Jenna and Zeke are priority number one, and everything else will fall in place.