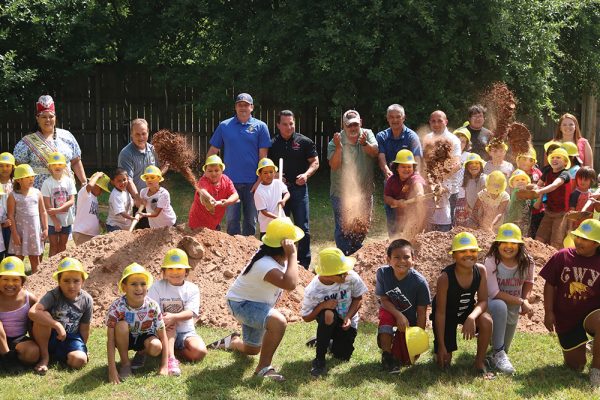 Tribal officials of the Eastern Band of Cherokee Indians join kids for the groundbreaking of the new Cherokee Youth Center on the afternoon of Friday, May 31. (JONAH LOSSIAH/One Feather photo)

Ground was broken for the new Cherokee Youth Center on Friday, May 31.

The new, near 50,000 square-foot complex, which will be situated directly behind the current facility, is expected to be completed in about 18-20 months after full construction is underway.

Matt Hollifield, the manager of the Cherokee Youth Center, hopes that this new complex will double the current capacity of the program.

“The biggest thing I’m looking forward to is room. We have a waiting list of over 100 kids. So, we can’t wait to pen that up and get all those kids in that have been waiting for, some of them years, to get into the Youth Center and give them that opportunity,” said Hollifield.

“We have 249 registered between this building and the Teen Center, and, on an average day, we get around 160-180 kids. With the new building, we’re looking to average a daily 300.”

The currently facilities for the youth center housed the first casino, and Hollifield says that it is challenging to operate efficiently without a set-up built for them.

“It’s been needed for a while…the building was built for a certain purpose,” said Hollifield.  “We’ve been trying to make it fit our purpose from then on. So, a lot of things don’t really work here as efficiently as we’d hope, like AC and heat and things like that. It’s always been an ongoing issue.”

McMillan Pazdan Smith Architecture helped to make this project a reality. Lindsey Rhoden, the company’s Asheville Office Director, was at the groundbreaking to speak and give specifics of the facility.

“It’s going to be on two floors instead of one, and that’s going to let us have a little more square footage then they’ve got. We’re going to have classrooms for all the grades, and really just let the serve the boys and girls better,” said Rhoden.

She says that this is only part of the project. It will also include an innovative library and a large multipurpose room with a gym.

Hollifield said that they they’ve been trying to get this project underway for years, but different issues have gotten in the way consistently. He says that with more room and more kids, the staff will increase as well. This project is expected to increase staffing by about 10, according to Hollifield.

An important piece of this construction is that is that it will not affect that current operations of the Cherokee Youth Center much. The current facility will be demolished in pieces to allow for a transition. The construction will be far enough away that the center can still operate.

Rhoden says that they are hopeful this project will be done by the middle of 2021.