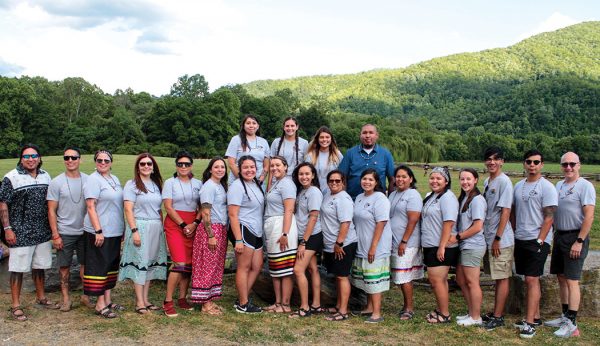 The 2019 Remember the Removal riders, representing the Eastern Band of Cherokee Indians and the Cherokee Nation (Okla.), gather at the Kituwah Mound for send-off event in their honor on the evening of Friday, May 31. (SCOTT MCKIE B.P./One Feather photos)

KITUWAH MOUND – On a cool, breezy late spring evening, 21 Cherokee men and women prepared for a journey retracing the steps of their ancestors.  This year’s Remember the Removal (RTR) bike ride, the 35th Anniversary, kicked off with a send-off celebration at the Kituwah Mound, the Mother Town of the Cherokee people, on the evening of Friday, May 31.

“I’m excited that we’re going to honor our ancestors with the journey that they made out to Oklahoma, but I’m also excited that we get to do it with the Cherokee Nation and share this experience with them because it’s not only honoring their ancestors but ours as well,” said Swimmer who works teaching the Cherokee language at the New Kituwah Academy.  “It will be another way of joining us together as a people – as one.  I’m really excited about what we’re going to learn and experience on the way.”

Carroll, who works building young Cherokee leaders through the Ray Kinsland Leadership Institute, said, “I’m excited and I’m nervous and I’m worried about being homesick.  I’m looking forward to the journey and to experience this with a lot of people that I didn’t really know before this and getting to know them on a deeper level.  Part of the reason why I decided to apply for the Remember the Removal bike ride was to try to make those connections with people in our community to try to rebuild positive, encouraging relationships because I think once that happens it’s going to spread throughout the community and really help our community heal and move forward in a positive way.”

Hernandez, who works with the EBCI Public Health & Human Services division, noted, “I want to reconnect with my past.  The reason I wanted to participate was to help find my identity…my kids are now being exposed to the Cherokee language and culture and they’ve set a positive example for me.  I want to challenge myself.  It’s an honor to be selected for this ride.  It will be an honor and an accomplishment.  The community has so much support for this, and I think it’s awesome.”

Principal Chief Richard G. Sneed, a 2014 RTR alumni, opened Friday’s event and said, “The journey of 1,000 miles begins with the first step.  In the case of the Remember the Removal ride, one revolution of the wheels.  Today, you will embark on a journey that will change your life forever if you allow it to.  It is a journey that was first embarked on by our ancestors over 180 years ago.  They had little to no choice in the matter.  You, and the RTR riders before you, have made a conscious choice to enter into and to experience a small glimpse of what they went through.” 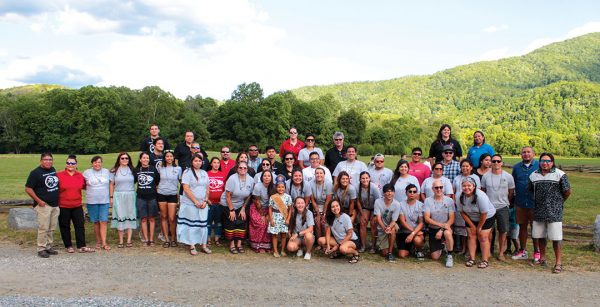 The 2019 RTR riders pose for a photo with RTR Alumni during Friday’s event.

Jack Baker, a Cherokee Nation citizen and National Trail of Tears Association president, spoke about the history of the Trail of Tears.  “There was a great loss of life, both in the camps and on the way, but yet, those who survived, persevered, and those who returned here, the ones that were able to stay here, left us a great legacy due to their perseverance and left two great nations – the Cherokee Nation and the Eastern Band of Cherokee Indians.  For this reason, we need to remember those who were removed.  They’re the ones who gave us this legacy.”

Will Chavez, a Cherokee Nation citizen who participated in the inaugural RTR ride in 1984 as well as the 2017 ride, told of his experiences on that first ride which left from the same spot on June 4 and entered Oklahoma on July 4 in 1984.  He said the first ride had its hardships, but he and the others persevered.

“I believe we accomplished our goal,” he noted.  “We wanted to remind people of what happened to our ancestors, and we wanted to bring attention to the fact that the Trails weren’t marked.” 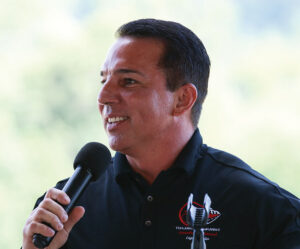 He added, “Three years later, after we finished the ride, Congress did allocate some money to mark some of the Trails.  So, I don’t know if we had anything to do with that or not, but I like to think we had something to do with that.  I think a lot of us used the momentum from that ride to do a lot of things for ourselves and our nation, and I’m proud of that too.  Never forget.”

She said that teamwork is key to the success of the ride and its goals of education and bringing togetherness to the group while remembering the sacrifices of the ancestors.  She referenced a comment by her RTR teammate Bo Taylor, “They say on the Trail of Tears over 4,000+ Cherokees died, which is traumatic and devastating, but they should say the Trail of Tears where 11,000 Cherokees survived so that we could remain Cherokees today.”

Smith added, “We have taken individuals from the Eastern Band and Cherokee Nation, who were separated not by choice, and achieved what we set out to do and become a family.”

At the end of the event, Anita Finger-Smith, North Carolina Trail of Tears Association, and Robin Swayney, Museum of the Cherokee Indian archivist, presented each of the 2019 RTR riders with a copy of “The Journal of Rev. Daniel S. Butrick” and “The Diary of Lt. John Phelps”.