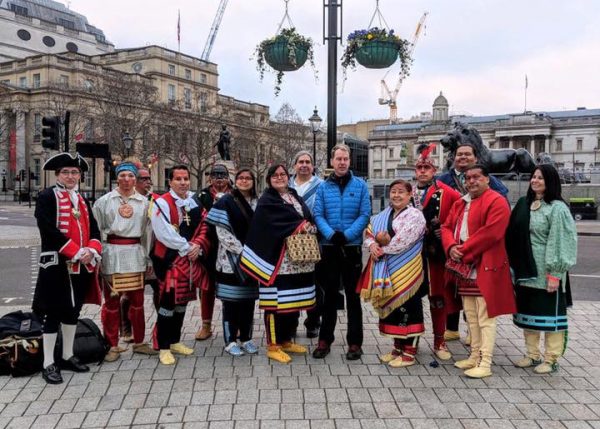 What started as a conversation in my living room turned into an experience over 200 years in the making.  Dawn Arneach, Museum of the Cherokee Indian executive assistant, came over to watch the 2018 London New Year’s Day Parade with myself and my family a year ago.  As we sat there, she noted that it would be cool for the Warriors of Anikituhwa, official cultural ambassadors of the Eastern Band of Cherokee Indians, to walk and perform in the event which is watched by hundreds of millions worldwide.

We encouraged her to pursue it; she did, and the rest is history – or rather history-making.  Ostenaco, Pigeon (reported in some instances as ‘Pouting Pigeon’), and Stalking Turkey visited England in 1762, escorted by Lt. Henry Timberlake, where they met with King George III and drew huge crowds during their stay.  Flash forward to Tuesday, Jan. 1, 2019, and another official Cherokee delegation, drew huge crowds and adulation as they participated in this year’s London New Year’s Day Parade.

The Warriors of Anikituhwa were joined by other members of the Tribe in the historic journey that began with a flight from Atlanta on Thursday, Dec. 27.  The Warriors performed in Trafalgar Square, were interviewed on BBC-TV, and participated in the parade itself in addition to various other appearances, engagements, and sight-seeing excursions – all the while representing the Tribe with dignity and pride.

While there, the group had the opportunity to visit many places in and around London including Stonehenge.

The Parade itself was streamed live on several platforms, and we woke up early (London is five hours ahead) to watch this group, and we weren’t disappointed. It was truly cool to see a Cherokee group interspersed on an international stage with so many other peoples and organizations.

The group did so well that they have already been invited back to participated in the 2020 Parade as well as a summer event in Rome, Italy.  But, more information on those will be released as they develop.

During their performance in Trafalgar Square, the Warriors performed the Cherokee Welcome Dance.  Back in September, Councilor Robert Davis, Deputy Lord Mayor of the City of Westminster and a Deputy Lieutenant of Greater London; London New Year’s Day Parade and Festival Executive Director Bob Bone; and other Parade officials delivered an official invitation to the group in the form of a framed certificate.

Prior to receiving the official invitation, the Warriors performed the same Welcome Dance. At that time, Taylor explained that it is not exactly a Welcome Dance.  “When Timberlake came through Cherokee country, he thought it was a Welcoming Dance, but it wasn’t really a Welcoming Dance.  It was a way to let him know that we were still warriors.  We were willing to protect our land and our people.  So, that was why they were doing it.”

The historic trip to London that the Warriors and the EBCI contingent took to participate in this year’s parade proved several things.  First, the world got to see that Cherokee people and American Indians are still here.  Secondly, it proves that any idea, no matter how grandiose it might seem, can be accomplished if everyone works together for a common goal.

Hats off to Dawn for having an idea, getting others inspired, and spearheading an effort to see it through.  Hats off to the Warriors and the rest of the contingent for a job well done, and I am eagerly looking forward to watching them again in the 2020 Parade.