If you didn’t make the trip to the Chief Joyce Dugan Cultural Arts Center this weekend to watch the Cherokee Musical Theater production of the “Lion King Jr.”, you missed something truly amazing and historic for our community. The junior high and high school production told the Disney story with great acting, singing, and dancing. As the music teacher, Michael Yannette, introduced the show on Friday night (the young people performed the show on Thursday, Friday and Saturday), he reviewed a long list of support staff who assisted the kids, but students were involved in every aspect of the production, from advertising to set design/construction to stage managing and box office. 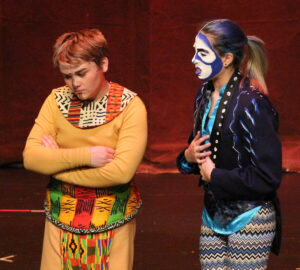 Zazu (right), played by Kim Hendrix, tries to give advice to young Simba, played by Jake Sneed, during opening night of “The Lion King Jr.” at the Chief Joyce Dugan Cultural Arts Center on Thursday, May 5. (SCOTT MCKIE B.P./One Feather)

Yannette also talked about the efforts of parents and teachers to support the young people and the project. It seemed to be an all hands on deck effort with much of the school leadership in support. He said that he had not seen this kind of backing for a project in any other school in which he had worked.

I had planned on going to the show on Friday, and I knew that Scott (McKie Brings Plenty) and his family had seen the show on Thursday. So, on Friday, I asked Scott what he and his family thought of the show. He told me that if you didn’t know this were school youth, you would think you were watching a Broadway show. And, he was right.

The sets and costumes looked professionally made. Lighting and sound production were equally impressive. The dance routines and singing were executed with precision. And, the actors knew their lines and delivered on cue.

Yannette made a point of telling the audience that, in addition to keeping up with their academic pursuits, about 70 percent of the cast and crew are athletes. He wanted to make sure we knew that these young people’s talents extend far beyond the stage.

It seems that many times the only times young people get attention are when their behavior is negative. I think it is so important to celebrate the accomplishments of the youth in our community. This production is but one example of their intelligence and talent. Many of our young athletes bring home championship trophies, individually and as teams. Some win local, regional, national and eventually world titles in pageants. Others are active politically and advocate for government change through the Junaluska Leadership Council. Still others keep the culture alive by producing artwork and keeping the Cherokee language alive. And, some use their skills to make life better for others through volunteerism.

“The Lion King Jr.” production in Cherokee is a shining example of what can be done through hard work, perseverance and talent. It also shows the positive outcomes that can be realized when the community and school provide the means for youth to achieve goals. To the 33 students who made up the cast and crew of this production, congratulations on an excellent production and what I hope will not be a once-in-a-lifetime experience. I hope it opens up many more opportunities for you and other young people to shine.