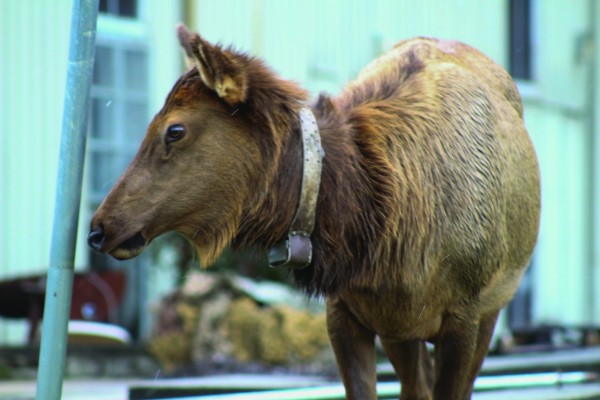 This elk, part of a herd of about 12, was seen in front of the Steve Youngdeer American Legion Post 143 headquarters in the Yellowhill Community on the afternoon of Thursday, Feb. 25. (SCOTT MCKIE B.P./One Feather)

By ROBERT JUMPER
ONE FEATHER STAFF

Both the Eastern Band of Cherokee Nation Tribal Council and the North Carolina General Assembly have labored over what to do with the elk population that currently reside and commute on the Qualla Boundary, in the state and on federal lands.

The male North American Elk, or cervus elaphus, may reach a weight of 700-900 pounds, a height at the shoulder of 6 feet and length of 8 feet. Female elk, on average, are a couple of hundred pounds lighter and about a foot and a half shorter. Newborn elk weigh an average of 35 pounds. Bull elk shed their antlers (only the males grow them) every year and a set of elk antlers from a mature bull elk could weigh as much as 40 pounds.

According to the Rocky Mountain Elk Foundation (RMEF), elk range was the entire United States and parts of Canada prior to European settlement with an estimated 10 million elk population. “Today, about one million elk live in the western United States , Wisconsin, Michigan, Minnesota, Missouri, Pennsylvania, Arkansas, Kentucky, Tennessee, Virginia and North Carolina and from Ontario west in Canada. Food, water and space are essential to elk for survival,” states information from the organization.  “Elk live in a variety of habitats, from rainforests to alpine meadows and dry desert valleys to hardwood forests.”

According to state and regional wildlife representatives, the current population is believed to be 160, more or less, but because of the widely dispersed and roaming herds, it is hard to get a solid count. Methods are being devised and implemented to more accurately track the number and movements of the elk, including DNA collection.

What is not in question is the presence of the elk in human populated areas. When the RMEF first collaborated with the state for reintroduction of the elk in 2001, the herd was isolated and sightings were rare. To have a chance at seeing elk, you had to travel to Haywood County to the Cataloochee Valley, near the initial release sites. As the herd grew into herds, the elk began to develop a migration pattern and, more seriously, have lost or possibly never established their natural fear of humans.  Sighting and even personal contact with humans has become almost commonplace.

Up-close contact with an elk can be very dangerous. As magnificent as these animals are, they are also wild and their behavior is unpredictable. Despite public warning and penalties (approaching within 150 feet or any distance that disturbs or displaces an elk in the park is a federal offense punishable with fines and arrest), people regularly attempt to get within touching distance of these large, wild animals. Elk are deceptively docile looking, until spooked or provoked.

Additionally, elk have found food sources in local gardens, resulting in herds visiting Cherokee residences looking for easy meals and using roadways as migration paths. State authorities have given permission to home owners and farmers to exterminate elk that are destroying crops and property. Tribal law still maintains no killing of elk under any circumstances.  Some animals have had to be killed in our area because of crop damage. We recently reported concerning an elk that was severely injured as result of an impact with an SUV. Fortunately, the occupants of the vehicle were uninjured, but the elk had to be destroyed by NC Wildlife officials.

Elk are a tourist attraction. The Tribe’s Destination Marketing program features elk on billboards, print media, internet and social media. Thousands of dollars of media exposure dedicated to showing the potential Cherokee tourist that they may have the opportunity to see elk in Cherokee must be translating to thousands of dollars in accommodation revenue (although no hard statistics are available for review on the tourism impact of elk). If there is any question about the elk’s popularity, take a peek at social media. Anytime elk are sighted, photographed/videoed, and placed on a website or social media, views skyrocket-some going viral. And, when the elk decide to encroach onto roadways or graze roadside, traffic stops. You quickly see arms exiting automobile windows with hands clicking photos on smartphones.

The damage and aggravation caused by these animals has caused many in local communities to call for a hunting season on them. The North Carolina Wildlife Resources Commission recently unanimously decided to prepare for the hunting of elk and to remove elk from the list of species of special concern. The Tribal Council of the Eastern Band of Cherokee Nation also has similar legislation in motion that would create a season of hunting the elk. The size and development of an elk hunting season is currently dependent on a scientific, specific determination of the number of deaths versus the number of births that are able to mature to adulthood per proposed season or year.

In speaking with EBCI tribal members, I found that people are mixed in their opinions about hunting elk. Some feel that hunting elk for sport sends a negative message to the communities and visiting public. We are a people who treasure nature, both plant and animal life. The Cherokee people have always lived with a philosophy of taking only what they need from nature and giving thanks to the Creator when anything in nature was used for survival. Native Americans are the first true naturalists. We live in harmony with, not in spite of, nature. As with any other harvesting, the taking of elk should be in line with that philosophy. A recent One Feather poll showed that readers who responded were overwhelmingly against an elk hunt.

Blake Henning, RMEF Vice President for Lands and Conservation, said, “We are a very pro-hunting organization, and so any time we help with an elk restoration effort, our long-term goal is that the population will get to a level  that can support a hunt. We’d like to see more elk, but I don’t think hunting will hurt the population. But, it can help with moving elk back on to public lands” (February 12, 2016 NC Wildlife Commission votes to open elk hunt Asheville Citizen Times).

There are many questions that need to be answered in considering how we deal with elk. Are there ways to lessen the close quarter contact between humans and elk? Are we willing to invest in proper mitigation measures to ensure the safety of both? If the Tribe decides to make hunting legal, what steps will be taken to ensure that humans are not in danger of hunters and elk? One individual I spoke with expressed concern that he and his family live adjacent to a field that is frequently visited by elk. Who should profit from hunts on the Boundary? How will the introduction of hunting elk be received by the Cherokee community and the visiting public?

One thing is certain, this once endangered and adored species is now in the crosshairs.