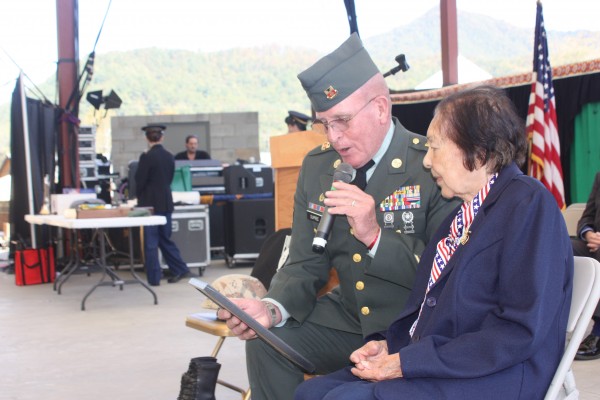 Mary Jane Welch Taylor was born on May 23, 1926, and she passed away on March 30, 2015 at age 89. She was married to Reuben Taylor, a World War II veteran who served in the United States Army in the 504th Parachute Infantry Regiment of the 82nd Airborne Division. Mary Jane and Reuben were married for 68 years and have two daughters, Frances and Wanda, five grandchildren, eight great grandchildren and two great, great grandchildren.

Mary Jane was the daughter of James and Lottie Welch. She attended Cherokee School and Boarding School, finished the 10th grade and moved to Pennsylvania to work in a laundry for one year. She returned to Cherokee and worked at the Oconaluftee Indian Village, then worked at the Harn Plant as a sewer for 29 years.

She volunteered to care for two ladies whose legs were amputated. As an Auxiliary member, she logged 300 hours of volunteer service at the Cherokee Indian Hospital. Mary Jane taught Sunday School at Rock Springs Baptist Church and served as church secretary.

She was a member of the Sewing Club at Tsali Manor making quilts. Mary Jane has been a NAIWA member for many years, traveling to national conferences throughout the United States. She also served as coordinator for the Cherokee School reunion which is held every year during the Cherokee Indian Fair.

When the American Legion Steve Youngdeer Post 143 first started, there were only five men who attended the meetings. Mary Jane would go with Reuben and worked in the kitchen, preparing meals for the men while they met.

Mary Jane had been a member of the American Legion Ladies Auxiliary for 48 years and also served as membership Chairwoman.

Warren is the service officer for the Steve Youngdeer American Legion Post 143.