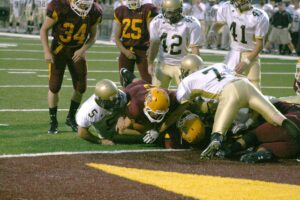 Braves QB Jesse Blanton dives for a score in the first quarter. He had 138 yards rushing and 42 yards passing on the game. (Photos by Scott McKie B.P./One Feather)

Two penalties late in the game definitely turned the tide away from the Braves and gave the Hayesville Yellow Jackets an early Christmas present in the form of a 29-28 win on Friday, Sept. 24 at Ray Kinsland Stadium.

Hayesville’s Blake Dockery hit Zach Wall on an 11-yard touchdown pass with just over two minutes left in the game.  The play involved a controversial pass interference call against Cherokee which was declined by the Yellow Jackets who pulled to within a point on the play.  Dakota Lyvers, who gained 100 yards on 14 carries in the game, ran for the 2-point conversion to give Hayesville the lead and the eventual win.

Cherokee got the ball back with 2:15 left and started at their own 37-yard line following a 22-yard return by Seth Littlejohn.  A penalty took the ball to midfield and Cherokee set up shop 50 yards away from a win.  The Braves gained two yards on their first two plays of the drive and one yard on a 3rd and 6 brining up a crucial 4th and 5. 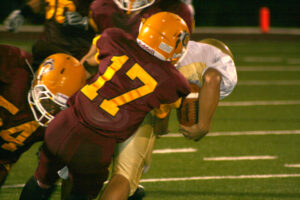 Gabe McMillan (#17) makes a nice tackle in the first half. On the offensive side, he had two catches for 27 yards and 2 TDs.

Cherokee QB Jesse Blanton, who gained 138 yards rushing and threw for 42 yards, darted and dipped on fourth down and made the sticks and then some down to the Hayesville 35-yard line for a Braves first down.

They tried for the homerun on first down, but the ball was incomplete in the end zone.  Blanton completed a short pass on second down, but a holding call brought it back.  With 38 seconds left and facing a 2nd and 19, Blanton took off around the right side, got the corner and ran it down to the 29-yard line when a Hayesville player knocked him into the brick side wall about five yards out of bounds.  No flag was thrown …at least not on the Yellow Jackets.   Cherokee got a sideline warning on the play and again the Braves were backed up.

Third down saw another incomplete pass near the end zone and Blanton was sacked on fourth down.  Hayesville would just run out the remaining thirty seconds.

Cherokee led by two touchdowns twice in this game.  They scored twice out of the blocks as Blanton ran for a 1-yard run on their first possession and Dorian Walkingstick returned an interception 42 yards for a score just two minutes later.

This was a game of two scores it seemed.  Following Cherokee’s two scores in the first quarter, the Yellow Jackets scored twice in the second quarter.  Lyvers ran for a 6-yard touchdown and then Josh Maddox followed suit on a 3-yard run.  The second point-after kick failed and the Braves led 14-13 with just over two minutes left in the half.

But, Cherokee hadn’t gotten their two yet…

On the next possession, Blanton hit Gabe McMillan on a 20-yard pass with under a minute left.  Walkingstick would add the two point conversion to make it 22-13.

Hayesville fumbled the ensuing kickoff and the Braves set up shop at midfield with just over 50 seconds left in the half.

On second down, Blanton hit Corbin Wright to the Hayesville 28-yard line.  Following a couple of penalties on either side including a costly facemask penalty against the Yellow Jackets, the Braves hit the end zone against as Blanton found McMillan on a 7-yard pass.  The two-point run failed and Cherokee led 28-13 at halftime.

Both teams had one possession during the third quarter, but nothing came of either short of eating a lot of clock.

Hayesville got the ball to start the fourth quarter and started their comeback.  After driving deep into Braves territory, Cody Gibson ran two yards for a score just several minutes into the quarter.  Lyvers ran for the two-point conversion and the Yellow Jackets cut the lead to 29-21.

Cherokee fumbled on their next possession and gave the Yellow Jackets good field possession at the Braves 44-yard line.  Minutes later, Dockery would hit Wall for the aforementioned pass and Lyvers would put the nail in the coffin with the two-point conversion.

This was a penalty-ridden game with 22 total in the game (Cherokee 13, Hayesville 9).  Each team lost a fumble, and Hayesville threw one interception.