Students from Cherokee and four other high schools visit NYC 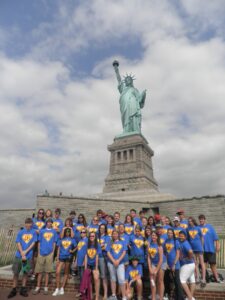 “My favorite memory of New York was getting to experience amazing things that I never dreamed of seeing with people I love,” said Southwestern Community College Upward Bound student Paige Penland of Smoky Mountain High School.

“Since this summer’s theme was Exploring New York, the students’ research projects focused on New York landmarks and the colleges they were going to visit,” said UB Director Annette Kesgen.  At their summer banquet, the students turned the SCC’s gymnasium into “The Streets of New York” where parents and guests toured the “streets” and heard about the research projects.

“Part of that college preparation is exposing students to different college campuses and allowing them to explore all types of options for their future,” Kesgen said.

The week-long trip was “an exciting experience,” said Cherokee High School student Jeremy Baldwin.  “We learned about colleges and it was a wonderful opportunity.”

Day one of the adventure was spent traveling on the tour bus but on day two the students hit the ground running, according to Kesgen. They visited Long Island University, Chinatown, Little Italy, South Street Seaport, Central  Park and the Empire State Building .

“Viewing the night skyline on top of the Empire State Building was the favorite of many of the students,” said Kesgen.

Victoria Fuller, Swain High School student, found Times Square to be her favorite spot “because of all the shops and all of the people.”

Day four was jam-packed with a tour of the World Trade Center Memorial Site, along with Ground Zero. From there, students visited Wall Street and then Rockefeller Center. On a tour of NBC Studio a few students tried their talent as a newscaster.

“We had to stop at Stand 4, which is famous for their marshmallow milkshakes featured on the Food Network and the Stardust Café – where the waiters and waitresses are budding Broadway singers,” Kesgen said. To round out the evening they attended the Broadway Show West Side Story.

“I really enjoyed New York.  I might end up moving there in the future or going to college there,” said Blue Ridge Early College student  Autumn Baird.

While these are just the highlights, the trip was best summed up by Sadie Donavan from Swain High School,   “The New York trip was amazing. It was a once in a lifetime opportunity and I feel blessed to have gone.”