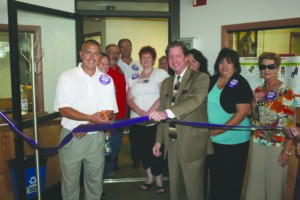 Alzheimer’s affects over 5.3 million Americans, and a new office in Cherokee will help combat the problem within this community.  An Alzheimer’s Association office, the first of its kind in Indian Country, was officially opened with a ribbon-cutting ceremony on Monday, Sept. 20.

Ash Tyler, Alzheimer’ Association WNC chapter director of development, called it a “very special day” and commented, “It’s a huge step forward for our organization.   We’re going to make some huge strides in addressing the disease.”

Kristy Dotson will serve as the program associate for the office.  She is excited and enthused to get going with her work.  “The main part of our job is to get out in the community and raise awareness about Alzheimer’s.” 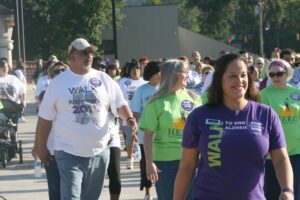 Dotson, a former CNA, holds a BS degree in Psychology and Criminal Justice from Western Carolina University.  She talked excitedly about her first presentations and said having the first Alzheimer’s office in all of Indian Country is a big responsibility but one she is ready to tackle.  “I know the area well.  It’s very exciting.”

The Cherokee office is one of only five others in the state joining Asheville, Hickory, Charlotte and Greensboro.  It will be part of the WNC Chapter which serves the 49 westernmost counties in North Carolina.

Principal Chief Michell Hicks cut the ribbon for the office on Monday.  “I applaud the partnership we’ve formed,” he told the crowd at the event.  “Our hope is that it will be an everlasting partnership.”

He said the disease is definitely something very difficult for families and individuals to deal with and said it is important for the Tribe to utilize all resources available.  “We have to try to stay ahead of the curve.  We’re taking the right steps.”

World Alzheimer’s Day was celebrated with a walk in Cherokee on Tuesday, Sept. 21.  Over 100 participants gathered at the Cherokee Indian Fairgrounds and walked to help raise awareness about the disease.

Alzheimer’s, a progressive and fatal brain disease, was named after and first discovered in 1906 by German physician Alois Alzheimer.  According to the Alzheimer’s Association, “Alzheimer’s destroys brain cells, causing memory loss and problems with thinking and behavior severe enough to affect work, lifelong hobbies or social life.”