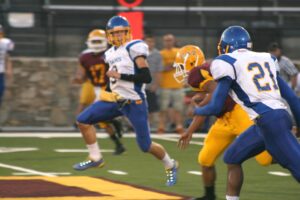 Dorian Walkingstick takes off on a run in the first half. He had 163 yards on 17 carries and 4TDs in the game. (Photos by Scott McKie B.P./One Feather)

Dorian Walkingstick is a rushing machine.  He gained 163 yards on 17 carries and scored four touchdowns during Cherokee’s 46-7 win over the Highland Tech Rams on Friday, Sept. 17 at Ray Kinsland Stadium.

So far this season, he has gained 933 yards in just five games.  There are six left!

He surely isn’t the biggest back in the world, but he can cut and dart like the wind.  Going out on a limb here, his running style is reminiscent of Chicago Bears great Gale Sayers.  They have very similar body types and running styles for sure…just saying…

That said, Cherokee tore up the Rams on Friday night. 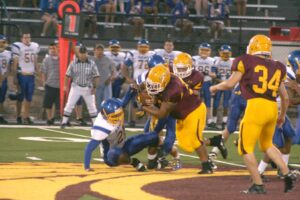 Buddy Arch (#54) steals the ball from a Highland Tech running back during the first half of Friday’s game at Ray Kinsland Stadium.

The game didn’t start very fast for the Braves though…in fact, they got a delay of game penalty before the game even started as the pre-game run-through took a little longer than expected.

But, once they actually got on the field, it was all but over for Highland Tech.   Cherokee had 425 yards of total offense and held the Rams to 202.  One of the most important stats for the Braves though was the fact that they didn’t turn the ball over at all in this contest while Highland Tech turned it over on three fumbles and one interception. 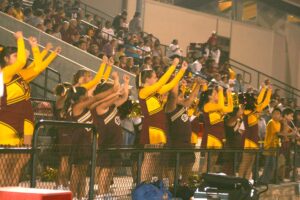 The Cherokee Youth Cheerleaders were featured in a dance with the varsity cheerleaders at halftime and cheered with them throughout the night.

Following a Rams punt on their first possession, the Braves started deep in their own territory at the five yard line.  Seven plays and 98 yards later, Cherokee would score first as QB Jesse Blanton hit Gabe McMillan on a 26-yard touchdown pass.  The extra point was no good and Cherokee took a 6-0 lead midway through the first quarter.

The Rams next possession wouldn’t go much better.  After starting at their own 37-yard line, they would cough up the ball four plays later.  Buster Arch recovered the fumble at the Rams 44-yard line.

Three plays later, Cherokee was back in the end zone as Blanton hit Seth Littlejohn for a 15-yard touchdown pass.  The two-point pass was no good and the Braves led 12-0 at the 2:49 mark in the first quarter.

Then, the Walkingstick show started.  He scored twice in the second quarter on runs of 10 yard and 9 yards .

The Rams would get on the board in the second quarter as Conrad Wiggins hit Derrick Shuda on a 1-yard pass.  The point-after kick by Keifer Ewing was good and Cherokee took a 28-7 lead into the locker room.

The third quarter was more of the same as Walkingstick scored two more on runs of 2 yards and 8 yards.

Cherokee put a lot of younger players into the game in the fourth quarter and they responded well.  Skylar Bottchenbaugh gained 27 yards on 6 carries and scored a 1-yard touchdown early in the quarter.

Cherokee’s defense was led by Buddy Arch with 10 tackles followed by Forrest Stamper with 7.  Poncho Ramirez recorded a sack and Stamper, Eli Crowe, Buster Arch, and Jeremy Wolfe and Russell Blankenship all recovered fumbles in the game.

Photo gallery of the game: