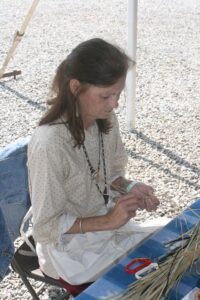 Mary Smith, a member of the Creek Nation of Oklahoma, demonstrates a traditional Creek style of basketry during the Southeast Tribes Festival held in Cherokee this past weekend. (Photo by Scott McKie B.P./One Feather)

Members of several southeastern and historically-southeastern tribes gathered in Cherokee this past weekend for the 5th Annual Southeast Tribes Festival.   Dancers, singers, artists, crafters, performers, and cultural demonstrators from tribes such as Cherokee, Creek, Seminole, and Choctaw were present for the two-day event which started Friday, Sept. 17.

And, not only were the demonstrators from various parts of the country, so was the viewing public.  Forty-eight 3rd graders and four teachers from W.H. Wright Elementary School in Spartanburg, SC visited the Festival on Friday.

“We just covered our unit in Native American studies and everything they saw in the Museum (of the Cherokee Indian), they recognized,” said teacher Licelle Barr.  “They were able to make the connections like the Trail of Tears.  Some of the students yelled, ‘I remember that!’” 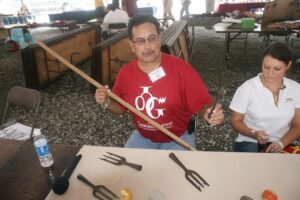 The Festival featured a mix of new and old – some so old that it was just about lost forever.

Mary Smith, a member of the Creek Nation of Oklahoma, has helped revive an old style of Creek basketry.  She helped bring back the style known as Creek Double-False Braid Rims which she related hadn’t been done for close to 150 years.

“I don’t want to do anything commercial,” Smith said adding that she prefers the old methods.  “I want to do everything natural and bring back the braid rim.” 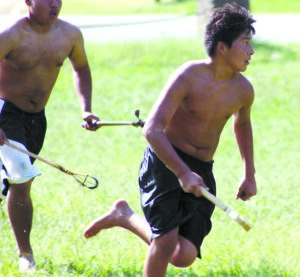 A stickball exhibition game was held on Saturday, Sept. 18 at the UNITY field in conjunciton with the Festival. (Photo by Dawn Arneach/One Feather)

Smith has been teaching the style to other Creek basket-makers and for the past four years has been teaching it to members of the Poarch Band of Creeks in Alabama.  She said there are probably now 25 people who can do the Creek rim style baskets.

“I love basketry,” said Smith.  “I absolutely live and breathe it.”

Rob Daugherty, a member of the Cherokee Nation and frequent visitor to the Qualla Boundary, was on hand demonstrating his traditional-style Cherokee fish gigs which he forged himself.  The gigs are either two-prong or three-prong and are made from melted down car springs.

“We use these gigs back home on the rough fish,” said Daugherty.  “It’s the only legal fish to gig.”

He said that traditionally buckeyes or walnuts were ground up and put into the water upstream.  The toxins found in the two nuts would shock the fish temporarily and cause them to float to the top for easier harvesting or gigging.  He said that process is now illegal.

Dance and song played a big part at the stage area of the Festival and visitors enjoyed several dance groups throughout the weekend including the Warriors of Anikituwah, Mystic Lake (Choctaw), Seminole dancers, Squirrel Ridge Stomp Grounds, and the Raven Rock dancers.

Stickball, a traditional southeastern game, was played at the UNITY Field on Saturday, Sept. 18.  Cherokee and Choctaw tribal members joined to form the teams which played an exhibition game.  Lloyd Arneach, Sr., an EBCI tribal elder from the Yellowhill Community, served as announcer for the game.

To see photo from Saturday’s stickball: