From Cherokees to the Civil War…

VONORE, Tenn. – What began as a deluge of rain turned into two days of education, fun, heritage, sharing and waiting 365 days to the 20th Anniversary.  The Sequoyah Birthplace Museum hosted the 19th Annual Great Island Festival on Sept. 11-12. 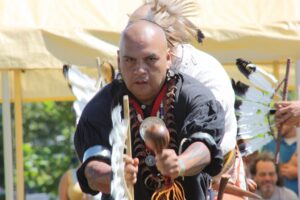 Sonny Ledford, a member of the Warriors of Anikituwah, performs the Eagle Dance. (Photos by Dawn Arneach/One Feather)

This year’s festival held two new exciting events: a Civil War Reenactment and a ride on a paddle wheeler.

With well over 30 vendors, demonstrators, crafts, visitors were able to meet and talk with Cherokees. History from a book, compared to history from descendants, is no comparison. The time periods that were represented ranged from pre-contact to present day Cherokee life. Crafts and skills that were made over 300 years ago are still being made to this day.

On Saturday, the raising of the flag to half mast was performed by the Steve Youngdeer American Legion Post #143, while the Civil War Re-enactors stood at attention. 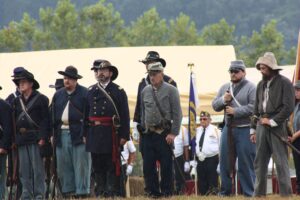 As visitors entered the grounds, the first person they see is Diamond Go-sti, and his pre-contact area.   With skins, baskets, shells, antlers and arrows to name a few items, he talks to the people about how life was in the early days of the Cherokee as compared to Cherokee life today.

His demonstration area and clothing are a far cry from his usual attire he wears as a Tribal Council representative for the Cherokee County – Snowbird community.

The next people seen are members of the Warriors of Anikituwah who talk about how Cherokee life since the influence of Europeans has changed and adapted.

Along the row, Myers Brown was dressed as a soldier from 1812 and Gary Holt as a soldier in the Thomas Legion.

Coming into the 1900’s, WWI and WII were both represented by descendants of veterans from those two wars.  Throughout the day, visitors could sit and watch dances by EBCI tribal members as well as hear stories and legends.

Civil War Re-enactors reenacted a battle on both Saturday and Sunday and on Sunday, EBCI tribal member Daniel Tramper was put in Grey and got to fight. One of the moments during the battle, Daniel took a scalp off a Federal. The battle had cannons, men on horseback, infantry and all the smoke a battlefield needs.

The other new event for the festival was a cruise on the lake on the Watts Bar Belle, an authentic replica of paddle wheelers from the 1800’s.  The boat is driven by split stern wheels. The cruise began with stories from EBCI tribal member Bo Taylor who talked about what he has learned of the Thomas Legion and the men that fought for Thomas.  Taylor spoke of how Thomas lived two lives; one as a Cherokee and one as an entrepreneur and how without his help the Eastern Band would not be living where they do today. Taylor ended his talk about Cherokee saying that many things and people have tried to wipe the Tribe out several times over, but that Cherokees are still here.

Following Taylor was the Butterworth Brigade, a band of Civil War Musicians with instruments and songs from the Civil War. Some songs were “Battle to Stay Alive”, “Old Man Tucker” and “Goober Peas”. ­

The Festival on Sunday went well, just a bit overcast to begin the day, but no rain.  EBCI tribal member Shirley Jackson Oswalt, from the Snowbird Community, started the day with Cherokee Gospel singing.

To find out more about this and other events held at the Sequoyah Birthplace Museum (423) 884-6246 or online at  https://www.sequoyahmuseum.org/.

Photo gallery from this event: