Choctaw wins Battle of the Nations

Four lost fumbles, including two near the goal line, cost Cherokee as they lost the annual Battle of the Nations 33-28 to Choctaw Central on Friday, Sept. 10 at Ray Kinsland Stadium.    Cherokee kept their penalties down in this game to only four, but it was the turnovers that would make the difference. 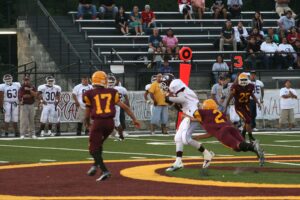 Braves CB Seth Littlejohn (#2) puts a lick on a Choctaw defender during Friday's "Battle of the Nations". (Photos by Scott McKie B.P./One Feather)

Choctaw wasted no time getting going in the contest as they took the opening kickoff and drove 63 yards for the score – the touchdown coming on a 37-yard run by Garrick Stoliby.

Cherokee’s first possession didn’t go as well as they fumbled at their own 27-yard line.  Choctaw recovered and set up shop at the Cherokee 25-yard line.
A few plays later Stoliby hit Jennera Bolin on an 11-yard touchdown pass.  The extra point was good and Choctaw led 13-0 midway through the first quarter. 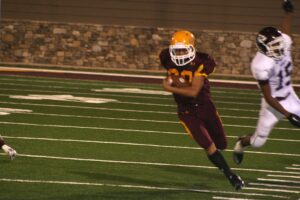 Greg Bradley takes off on a 70-yard punt return for a touchdown.

Two plays into their next drive, Cherokee got on the board as QB Jesse Blanton ran the ball in from three yards out.  The extra point was blocked and Choctaw led 13-6 going into the second quarter.

Miscues by both teams were the name of the day for the next few minutes.  Choctaw had a punt blocked and the Braves took over at the Warriors 39-yard line.  The Braves lost a fumble on second down of that drive and the Warriors took over at their own 35-yard line.  Then, on third down of their drive Corbin Wright intercepted a Choctaw pass and returned it 37 yards for Cherokee’s second score.

The extra point was no good and Choctaw held onto a 13-12 lead with nine minutes left before the half.

Less than two minutes later, the Warriors would answer on a 26-yard touchdown pass from Stoliby to Bolin.  The kick failed and Choctaw led 20-13.

Cherokee was forced to punt on their next possession and Choctaw took over at their own 19.   They were unable to move the ball and had to punt – setting up the most exciting play of the entire game and the season to-date for the Braves.

Greg Bradley caught the ball at his own 30 yard line, took off down the right side and saw nothing, reversed field and sprinted left…more left…more left…around all of Choctaw’s defense and he got the sideline…from there it was all daylight and a foot race – which he won.  His 70-yard punt return for a touchdown brought it to 20-18.  Blanton ran for the two-point conversion and Cherokee tied the game at 20-20.

But, the Warriors refused to go into the locker room tied.  After starting at the Cherokee 35-yard line following a nice kick-off return, Choctaw got into the end zone as Stoliby hit #42 (no one on Choctaw’s roster was listed as #42) for a 6-yard score.  The extra point was good and Choctaw led 27-20 at the half.

Cherokee came out of the locker room fired up and ready to go.  Walkingstick found the end zone on a 36-yard touchdown run just a few minutes into the third quarter.  Blanton ran for the two-point conversion again and Cherokee took the lead (28-27) for the first time in the game.

Both sides went back and forth and the Braves were able to put together a nice drive at the end of the quarter.  Starting at their own 31-yard line, they drove down inside the Choctaw 5-yard line on a 15-play drive.   But, it was not to be as the Braves fumbled just shy of the end zone on third down.

Choctaw recovered and put together a nice drive of their own which culminated in a 1-yard touchdown run by Stoliby.  The two-point conversion was no good and the Warriors took back the lead at 33-28 with just less than ten minutes left in the battle.

Cherokee punted on their next possession and Choctaw took over on their own 45-yard line.  They began grinding down the field on a seemingly game-ending drive until they put the ball on the ground at the Cherokee 29-yard line and the Braves recovered.

Starting at their own 33-yard line, Cherokee started driving.  But, lightning did strike twice in this game and the Braves fumbled the ball away inside the 5-yard line again.  Choctaw recovered and was able to run out the clock.

Photo gallery of the game: