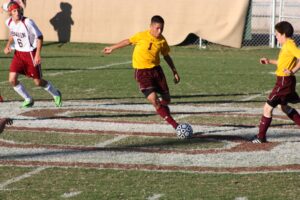 With a new set of legs and a new coach this year, the Cherokee Braves Men’s Soccer team has a new look and game about them.

Playing the Swain Maroon Devils on Monday, Sept. 13, Cherokee held the Devils for 80 minutes to win the game 3-0.

Scoring for the Braves were Tavi Rivera at the 33:54 minute mark in the first half and Darius Thompson at the 12:34 minute mark.

Just about the 1:20 mark Swain received the one and only Yellow Card of the game.

Beginning the second half of the match Cherokee looked a little wore down, but it didn’t stop Dakota Bryson from being in the right spot at the right time for a cross from Tavi Rivera to score Cherokee’s third and final goal of the game at the 21:08 mark in the second half.

The Braves were still up and running by the time the whistle blowed to end the game. Cherokee was able to take several shots on the Swain goal throughout the game, while Cherokee’s defense kept the Devils out of the goal box, clearing the ball back to the forwards and keeping Swain scoreless.