KITUWAH – With a slight breeze going through the valley at Kituwah, the thoughts of 12 Cherokee men and women turned to a journey ahead and their ancestors before.  The 2022 Remember the Removal (RTR) riders received a send-off from Kituwah, the Mother Town of the Cherokee, on the evening of Friday, May 27.

The Ride is a 950-mile event which retraces the northern route of the Trail of Tears through Georgia, North Carolina, Tennessee, Kentucky, Illinois, Missouri, Arkansas, and Oklahoma.  Riders embark on the journey from New Echota, Ga. on Monday, May 30 and end up in the seat of government of the Cherokee Nation, Tahlequah, Okla., on Friday, June 17. 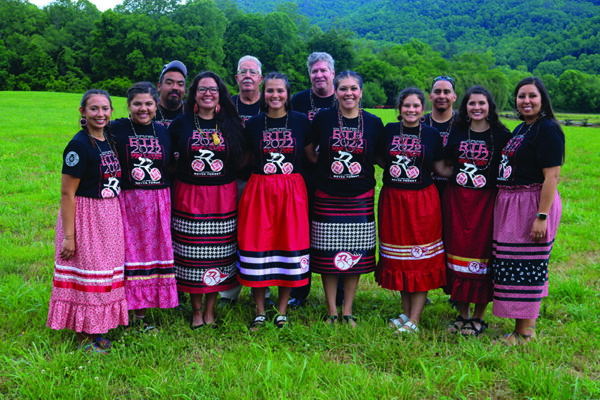 “I feel like I’ve been waiting for this moment for so long and it’s finally here,” said Laura Blythe.  “My anxiety is high, my excitement level is getting higher. I’m really nervous because I know what we’re getting ready to embark on is a physical, mental, spiritual, emotional journey. I just hope that, one, we will be a family by the time we get through with this; and two, it’ll solidify relationships that we probably don’t even know that we have right now, by the end.”

Aguilera echoed her sentiments, “I’m very anxious. My anxiety level is kind of high. I have been really busy with work, getting stuff ready here with my family and my kids, making sure they’re set and stuff, and then the ride itself. I think I’m physically prepared. I’m ready for the journey, trying to process everything. I’m ready.”

West, a former Miss Cherokee, noted, “I am very nervous, of course. Physically, I’m ready, I feel just ready to go. But mentally is going to be the challenge. Leaving home…as Miss Cherokee I traveled with my mom everywhere, so now I don’t have her to go with me so it’s a little nerve-racking. I’m ready to go. I’m ready to do this. It’s a different experience, definitely, that I feel like I need.”

She is looking forward to forging stronger relationships with her fellow riders.  “I’m looking forward to visiting the historical sites, a lot of them I’ve never been to, and getting to know the women from Cherokee Nation, especially. Meeting them this morning, you could feel that there was a separation because we don’t know each other. One made the comment that it’s like two worlds coming together when we should be one. I’m excited to make it that one world with them.”

Several people spoke during Friday’s event – giving advice, encouragement, and their own perspectives to the riders on their upcoming journey. 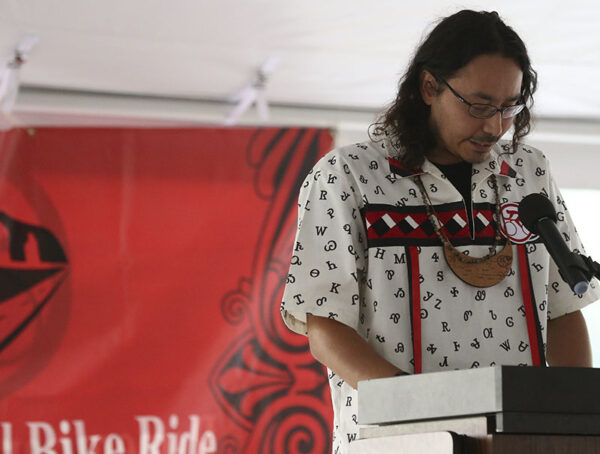 Bear Allison, an EBCI tribal member who went on the ride in 2021, speaks during Friday’s event.

“They’ve been through a lot of training,” Yona Wade, a 2013 RTR alumnus, said.  “I can remember my time on the bike ride – many, many, many hours riding climbing those hills in preparation, the anxiety that comes along with preparing for this long journey. I wish you all good speed on your travels as you begin.”

He spoke to the spirit of kinship fostered on the ride.  “While these riders may leave as Eastern Band and Cherokee Nation, they will definitely arrive Cherokee people when they get to Oklahoma as a team.”

Brown spoke to the healing nature of the ride.  “It’s through things like the Remember the Removal riders, and through events like this that we’re able to cope with some of that trauma that was created during that time. It’s through developing new kinships and forming new bonds.”

An EBCI tribal member, Allison was on a journey of discovery.  “At the time, I wasn’t sure why we as the Eastern Band participated in the ride. I had that question when I first heard about the Eastern Band joining. I remember saying, ‘we weren’t removed, so how is riding a bike to Oklahoma honoring our ancestors?’.” 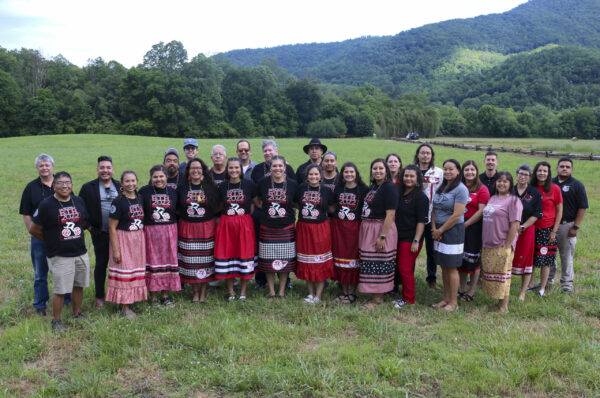 The 2022 Remember the Removal Riders pose with RTR alumni.

He added, “In my search for finding a reason (to do the ride) that I would be satisfied with, I took my ignorance of my ancestors and the removal to be my reason. I wanted to experience the ride to learn more about the removal and to see if I would learn why the Eastern Band participates and to hopefully help create something that would help honor those that remained here. I quickly started to learn and see why we participate through the history and genealogy classes. In those classes, I realized that I could have had ancestors that were removed, but their children were able to remain here. Or, I could have had some that were being removed and escaped and made their way back. That knowledge became what I focused on for the ride.”

Originally a member of the 2020 RTR team, Allison and crew were unable to make the journey that year due to the COVID-19 pandemic.  So, several of them came up with the Remember the Remained ride of sacred Cherokee sites in the western North Carolina area.  “That experience was amazing on its own.”

As he searched further and learned more, clarity came to him.  “I understood why the Eastern Band participates. It’s because no matter who your ancestors were, if they were Cherokee, then they were negatively affected by Indian removal.”

He concluded his remarks by saying, “It’s hard to put into words because it’s so emotional and so spiritual. I encourage any Cherokee to apply to the ride. I wish this year’s team safe travels and good luck in Missouri. I’ll see you there.”