KITUWAH – The sounds of people laughing, games being played, songs being sung, and the Cherokee language being spoken filled the valley at Kituwah on Saturday, May 21 as the three federally recognized Cherokee Tribes – the Eastern Band of Cherokee Indians (EBCI), the Cherokee Nation, and the United Keetoowah Band of Cherokee Indians of Oklahoma (UKB) – came together to celebrate the Mother Town being back under Cherokee control. 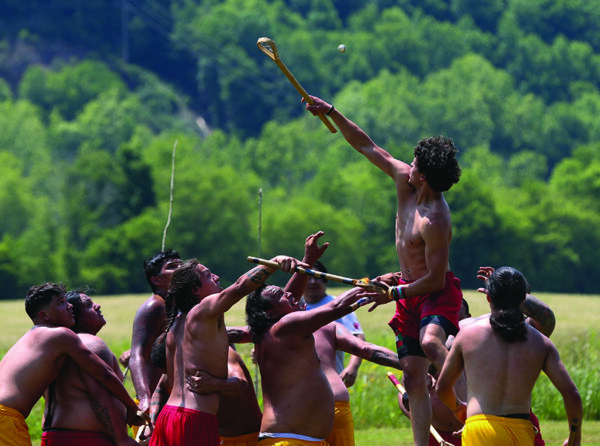 Don Bradley, a member of the Eastern Band of Cherokee Indians and a senior standout athlete at Cherokee High School, soars up to get the ball during an exhibition stickball game at the Annual Kituwah Celebration held at Kituwah on Saturday, May 21. All three federally recognized Cherokee tribes came together to celebrate the land being put into trust by the federal government recently. (SCOTT MCKIE B.P./One Feather photos)

Kituwah, the Mother Town of the Cherokee, located just outside of Cherokee near Bryson City, was placed into trust for the EBCI by the Bureau of Indian Affairs (BIA), U.S. Dept. of the Interior last fall.  The property was purchased by the EBCI in 1996, and according to the Public Notice to Acquire Land into Trust, the site totals 307.03 acres.

Former EBCI Principal Chief Joyce Dugan was instrumental in getting Kituwah back for the Cherokee people.  In 1996, she took a resolution to Tribal Council asking that they purchase the property, then known to most as Ferguson Fields, for $2.1 million.  Council passed the legislation unanimously.

“I think, looking back, it created a cultural renaissance because people began to learn about their culture,” she told the crowd on Saturday.  “If anything, the legacy that I left and the Tribal Council at that time left, was a renaissance of our culture, of our language, our customs for future generations. And, for the first time, our people began to say, ‘our culture and our traditions are important’.”

Chief Dugan went on to say, “Enjoy your day. Love each other. And think about what all went on down here on this piece of land. And listen to the sounds of those children, those mommas and daddies who lived here. I’ve been told that if you’re real quiet down here in the evenings you can hear them. I don’t doubt that.”

EBCI Principal Chief Richard G. Sneed said getting Kituwah put into trust status was a priority of his since taking office. “It is an historic day. As I mentioned earlier, we would not be here today if it were not for the vision and the leadership of Chief Dugan…Great leaders like Chief Dugan have several things in common and one is they have vision. If you’re going to be in leadership, you’re going to have to have vision for the generations of Cherokees that are coming after us.” 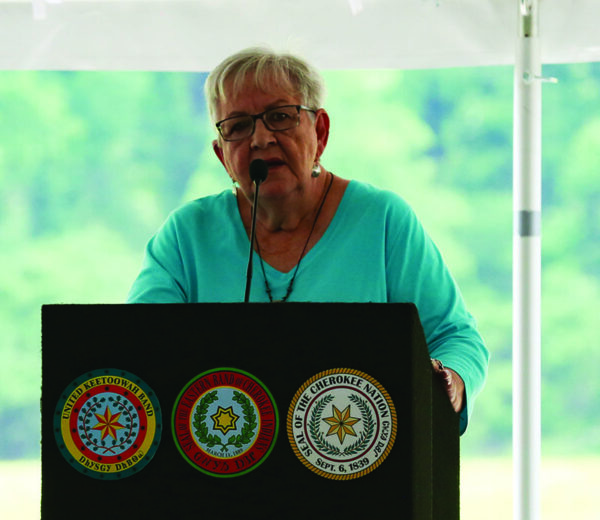 Former Principal Chief Joyce Dugan speaks during the opening part of the Celebration.

EBCI Vice Chief Alan B. Ensley was in his first term as a Tribal Council representative when the property was purchased in 1996.  “We were at the very beginning stages of becoming a gaming Tribe back then, and $2 million seemed like $100 million at that time.”

He also praised Chief Dugan for her vision and action.  “Chief Dugan invigorated our culture at that time.  We didn’t know that much about our culture…I knew very little about our Cherokee history.”

Saying it was a great day to be a Cherokee, Vice Chief Ensley noted, “When Chief Dugan brought this in, it reinvigorated our culture here in Cherokee, and it brought our culture, our language, and everything just catapulted once we bought the homeland back.”

Cherokee Nation Principal Chief Chuck Hoskin Jr. said, “This is a special day for all Cherokee people. I want to express my deep appreciation on behalf of the Cherokee Nation for the work of the Eastern Band of Cherokee Indians. We all celebrate this as our Mother Town. We all celebrate this area as our homeland. But the burdens, the opportunities to seize to preserve this, of course, falls squarely on the Eastern Band. It’s just remarkable to see what the Eastern Band has done in the area of historic preservation securing this land.”

He said when he thinks about Kituwah having existed from “time immemorial”, it helps him put things into perspective.  “When we think about this site, it makes all the challenges that we might have in our governments or back home or in our economy or in our politics, it makes those seem much tamer as we think about how long this place has stood the test of time. When we think about how long this space has endured, it makes us realize that the tragedies that we have endured are not as great as all of our triumphs because so much of our triumphs are really embodied in this space.” 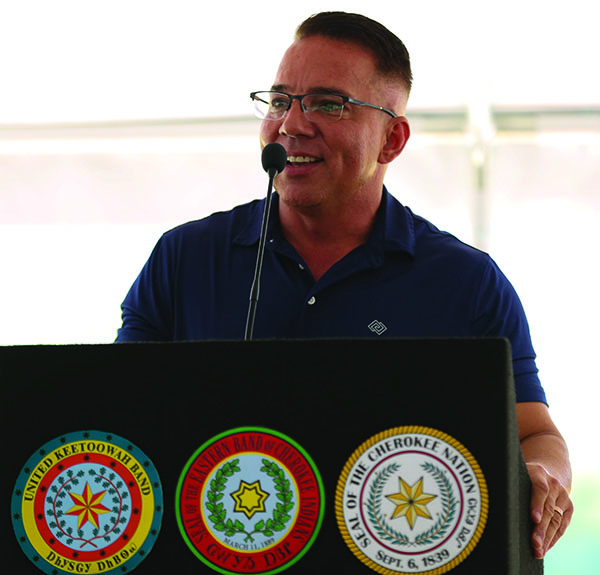 Principal Chief Richard G. Sneed speaks during the opening part of the Celebration. He said, in part, “We are here today as one people. We are today as Cherokees.”

UKB Principal Chief Joe Bunch commented, “Coming here to the mountains is coming home. To our tribe, the Keetoowahs, it’s coming home and that’s good medicine for each and every one of us. It’s where we started, certainly not where we ended. But, with all the successes that we’ve had throughout, and some of the small defeats and so on, we are still here. We are still here.”

He read a proclamation from the UKB which designated May 21, 2022 as “Kituwah Mound Day”.  The proclamation states, in part, “The Eastern Band, the United Keetoowah Band of Cherokee Indians, and the Cherokee Nation of Oklahoma together celebrate the return of our symbolic mother town and the union of our forefathers who gave the ultimate sacrifices in protecting the families and land and life as we knew it back then.”

Chief Bunch concluded by saying, “Believe me, it is coming home.  It is good medicine.  No doubt about it.  It is wonderful medicine.  What a grand day it is to be Keetoowah.” 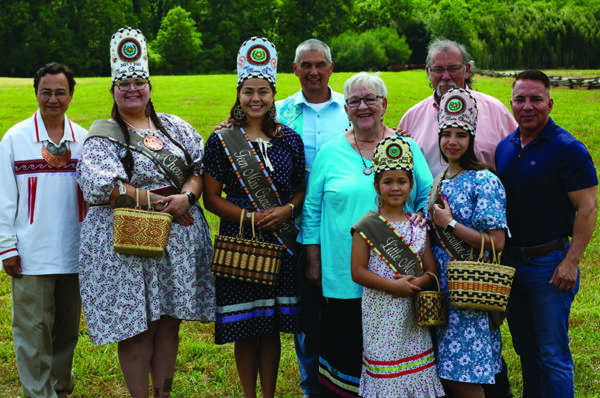