The coveted Frell Owl Award has been presented to a Cherokee basketball legend who has continued to give of her time and knowledge to help countless numbers of young players.  The 2021 Frell Owl Award was presented to Peaches Squirrell during a luncheon at Harrah’s Cherokee Convention Center on the afternoon of Wednesday, May 4. 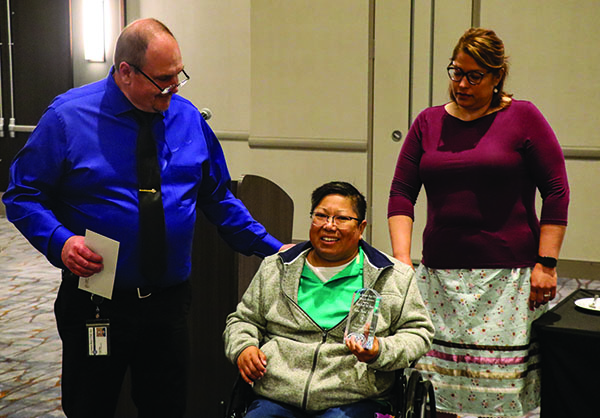 “I’m just happy right now,” Squirrell said following the presentation.  “It makes me proud. I’ve been doing what I love forever, being with the kids. I just loved what I did, you know. I just hope that I can make somebody else’s kid a better person. That’s always been my goal in life to give back to the community.”

Having been a pivotal member of the 1995-96 Cherokee Lady Braves state championship basketball team, Squirrell has donated thousands of hours since those days teaching young ladies the game of basketball – the game she loves.  And, she does it all with her ever-present smile and sense of dedication and hard work.

Greg Owle, Cherokee Boys Club general manager, spoke of the Frell Owl Award, “For those of you who don’t know, the Frell Owle Award is given to those who best exemplify the character and accomplishments of the late Mr. Frell Owle. And to those who have significantly contributed to the welfare of the Cherokee children and families.”

This year, a total of four people were nominated including Dr. Debora Foerst, principal at Cherokee High School (CHS); Amanda Moore, volunteer with the EBCI Pageant Board for years; John Mitzel, CHS athletic trainer; and Squirrell.

Of Squirrell, Owle noted, “Youth sports has been the backbone of her career and she is always looking out for the youth of this community and supporting their efforts. Peaches is always thinking of others and looking for ways to improve programs for our youth and young people. She believes in our youth and has the expectations to match those beliefs helping so many to rise to their potential.”

Principal Chief Richard G. Sneed was in attendance at the event and spoke highly of Squirrell, “We gather here today to pay honor and respect to a citizen of our tribe who has lived a life of service to our community.”

Chief Sneed added, “Secondly, here locally, we share our Cherokee identity and our culture in common. And, in both our humanity and our Cherokee culture we find common values – group harmony, service, kindness, generosity, and love are all common goals and values…Individuals like Peaches not only understand the importance of these values, but they live it. They live it every day pouring their heart and soul into working and serving others and thereby promoting and proliferating community. The winner of today’s award has demonstrated repeatedly the understanding that the greatest among us shall be a servant to all. May we all take time to reflect on our own lives and make the necessary adjustments to follow the example of Peaches and others like her who have demonstrated the simple and long-standing truth that in the eyes of God there is no better love than to give our lives in the service of others.” 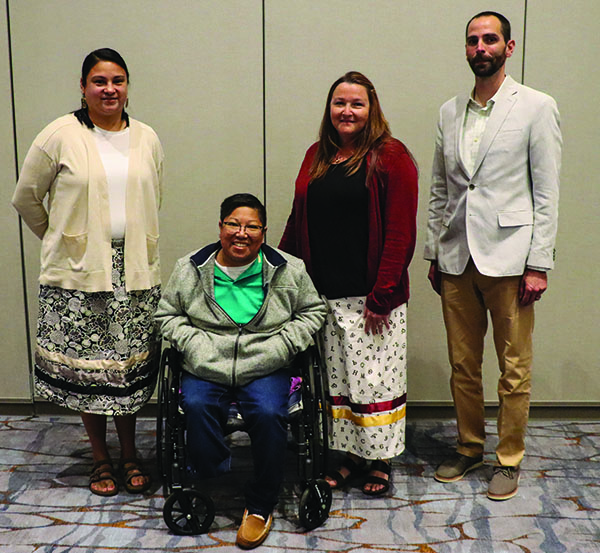 Peaches Squirrell, second from left, 2021 Frell Owl Award recipient, is shown with the other nominees for the award including Amanda Moore, left; Dr. Debora Foerst, second from right; and John Mitzel, right.

Dr. Michael Murray, Cherokee Central Schools superintendent, said of Squirrell, “At the end of the day, when you see all the terrible things going on in this world and deal with all the craziness that goes on with this world, to be able to lift up heroes, and especially someone who’s been through a lot like Peaches who not only has modeled what we all want to be…when I grow up, I want to be Peaches. At the end of the day she does that in such a humble way and she’s just a beautiful person.”

He concluded by saying, “You are a gift to every one of us and we are all blessed to have our children not only experience you, but watch you and what you mean to everyone every day.”