CHAPEL HILL – The name Henry Owl is now etched in stone among some of the most historic buildings in American academia.

After a formal dedication ceremony on Friday, May 13, the Henry Owl Building is officially named and now houses UNC (University of North Carolina – Chapel Hill) Student Affairs. Henry Owl (1896-1980) was a member of the Eastern Band of Cherokee Indians (EBCI) and was the first student of color to attend UNC-Chapel Hill. He graduated with his master’s in history in 1929 and would go on to become a face of the fight for Cherokee civil rights. 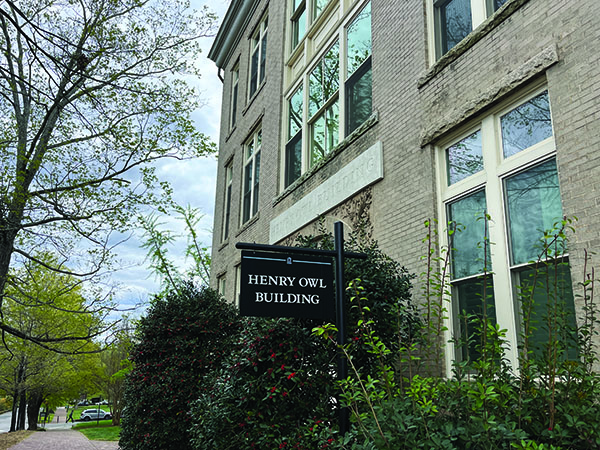 The year following his graduation from UNC, Swain County refused him the right to vote, citing his ‘illiteracy’. The Indian Citizenship Act of 1924 deemed all American Indians citizens, but still regulated voting on a state-by-state basis. Owl would testify before Congress on these actions, provoking new legislation to be drafted that would grant suffrage to EBCI members.

Owl chose the life of educator for much of his career. In his days as a young adult, Owl also enlisted in the US Army and rose to the rank of Sergeant. This was in 1918, the final year of World War 1.

It was these stories and more that were discussed Friday at this building dedication. The event brought together leaders of the university, students, and many descendants of the Owl family. UNC Chancellor Kevin Guskiewicz was the first to speak.

“I have asked the Commission of History, Race, and A Way Forward to work with various stakeholders on campus and across North Carolina to provide a recommendation for an official university land acknowledgment. That work and the work that we begin today with the renaming of this building for Mr. Henry Owl are expressions of this university’s commitment to partnering with American Indian communities as they seek to shape their future,” said Guskiewicz.

The Commission of History, Race, and A Way Forward was launched by Guskiewicz in January of 2020 with a focus ‘on three main areas: archives, history, research and curation; curriculum development and teaching; and engagement, ethics and reckoning.’

“In his master’s thesis, which I have a copy of in my office, Henry Owl wrote on the Eastern Band of Cherokee Indians before and after the removal. In 175 pages, he documented the mistreatment of Cherokees in our country. He wrote that his purpose was to create racist myths and misconceptions that have ‘befogged the underlying facts of history’. That line, befogged the underlying facts of history, stands out to me. At times, there has been a fog around incredible, inspirational, and underrepresented voices in our university’s history. Our goal today is to shine a light through that fog and illuminate more of the people who have made our university the place it is today.”

Chancellor Guskiewicz announced that the university was gifting bound copies of Owl’s thesis to Owl’s daughter Gladys Cardiff and Ashleigh Stephens, who was representing the EBCI on behalf of Principal Chief Richard G. Sneed.

Stephens, EBCI Chief of Staff, also shared her piece on the day.

“As both an alumnus of Chapel Hill and as a citizen of the Eastern Band of Cherokee Indians, it gives me great joy to take part in this dedication of the Henry Owl Building,” said Stephens. 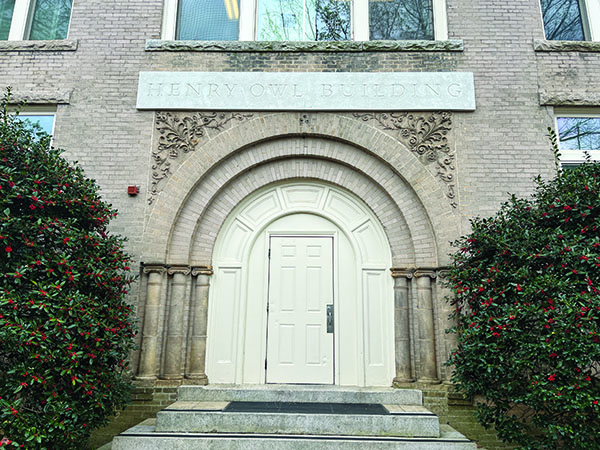 “His story has long been a part of the university’s heritage, and now it becomes a part of its future endowment. As leaders of new generations pass through these buildings, we hope that remembrance of Henry Owl will inspire them to embrace noble values even as they aspire to heights of success. We hope they will heed his example and make the hard choice to stand tall in the face of injustice, perseverance, and overcome barriers as they endeavor to make the world better than they found it.”

Stephens called up Birdtown Tribal Council Rep. Boyd Owle to gift a basket made by Shirley Taylor to Cardiff.

Two undergraduate students at UNC were also invited to speak, both are members of the EBCI. The first to present was Colby Taylor of the Birdtown Community.

“When reading about Mr. Owl, one word came to mind – courage. This is because Mr. Owl exemplifies the very definition of the word. I say this because my definition of courage is the choice and willingness to be uncomfortable,” said Taylor.

Immediately following Taylor was Juanita Paz-Chalacha. She expressed her thanks for being at the event but wished to offer a much different message to the audience and her university.

“I’m here before you all today not with a multitude of praise for this event, but with a hollow and exhausted anger. Yes, this event is a significant step forward in getting Native representation on campus. Yet, it is still one long-overdue step. The representation we get here has to come from the Native students themselves, not the university. While we are seen here at this event for the duration of time we are here, afterward, what are you, the university administration, going to do to get proper representation to your Native students and faculty going forward?”

The official dedication was spoken into record by Chancellor Guskiewicz and UNC assistant professor Dr. Benjamin Frey. Dr. Frey is a member of the EBCI and first presented the dedication fully in Cherokee. 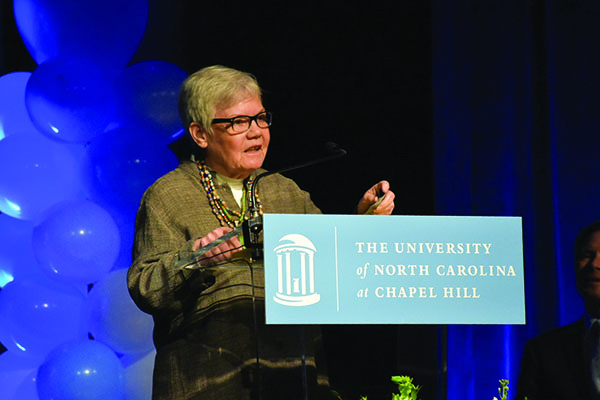 The final speaker at the event was Cardiff. She thanked all of the family members that made the effort to make it to Chapel Hill that day and spoke about the significance of the day. She also gave credit to Theda Purdue, a former history professor at UNC-Chapel Hill. Purdue fought to have Henry Owl’s name represented on UNC’s campus for years, long before she met Cardiff.

“The significance of today goes far beyond any one name. The aim to create and support a more diverse and inclusive campus as a strategic initiative. The potential for collaboration and mutual reciprocity. A celebration of our differences and our shared humanity. These are the high aims,” said Cardiff.

Immediately following the dedication of the Henry Owl Building, another was held for the McClinton Residence Hall. Hortense McClinton was the first black professor at UNC, coming to Chapel Hill in 1966. These two buildings were announced together in December of 2021.

After a banquet to celebrate McClinton and Owl, members of the Owl family and the UNC American Indian Center made their way North on campus to the Henry Owl Building. Members of the family shared their thoughts on the day as each attendee formed a circle and burned sage outside the building.

Gladys Cardiff said that she was overwhelmed by the support and gifts. She said she was honored by all of it and that seeing her father’s name on the building was special. She finished her speech with a sentiment for her father and the appreciation of having a platform.

“History is all about who gets to speak and who does not.”