Cherokee Musical Theatre students go tropical with “Once on This Island Jr.”

The Cherokee Central Schools Musical Theatre Program took their audience to the Caribbean with its performance of “Once on This Island Jr.”, a musical based on the 1985 novel “My Love, My Love” by Rosa Guy.  The musical opened at the Chief Joyce Dugan Cultural Arts Center on the evening of Thursday, May 12.

“It’s fantastic to finally be out of the pandemic and be able to do what we all love to do,” said Valerie Deitz Tissue, Cherokee Central Schools dance and musical theatre director.  “Their talent is amazing, and their commitment to the show is fantastic.  You wouldn’t know that they hadn’t been on stage in a very long time.”

Due to the COVID-19 pandemic, this is the first production since 2019’s production of “Into the Woods”.  Tissue noted, “The majority of the cast haven’t been on the stage in two years or ever. Some of them are brand new to theater so it’s so great to see about 40-plus kids included in the cast and crew.” 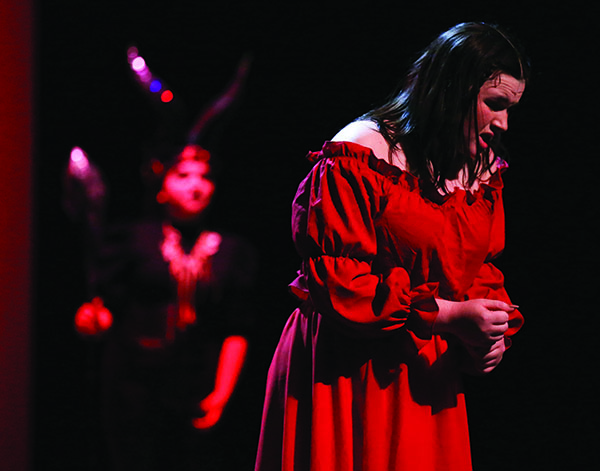 Lauren Wooten, as “Ti Moune”, is shown in a pivotal scene during the opening night performance of “Once on This Island” by the Cherokee Central Schools Musical Theatre at the Chief Joyce Dugan Cultural Arts Center on the evening of Thursday, May 12. (SCOTT MCKIE B.P./One Feather photos)

The students came back to the stage ready to go commented Tissue, “To get these characters, they had an audition process…we spent the first part, a good solid month, on how to audition, what a good audition looks like. Each student had to come and do a one-minute monologue. Each student had to sing sixty bars of a song, just like you would do at a standard musical audition out in the real world. They crushed the audition. All of them came in so prepared, I was so pleased.”

She praised her students, “There’s so much talent here, and there’s really some big brains here.”

One such student is Lucian Davis, a senior, who portrayed the part of Asaka, the God of Earth.  “I’ve just been trying to make it really fun. I want you to just eat me up every time I’m on the stage. So, I’m just trying to really like bring it.”

Davis, who will be attending the University of Washington this fall, said the character reminds him of himself.  “My character is loud and, I mean, I am very loud and proud, bringing you everything you want. I’m just over the top, dramatic, and all up in your face like, ‘I’m here and I’m going to make you know I’m here, and I’m beautiful’.”

The other senior in the production was Abigail Taylor who played Papa Ge, the God of Death.  “This is my first lead role. Usually, I’ve been in ensemble and in ensemble you have to be like smiley the whole time and just having fun. And this one, I’m just trying to be intimidating or mean and it’s very difficult sometimes.  I do miss the ensemble sometimes, but it’s fun to step into a character, too.”

This character was quite different than Taylor, who will attend Wake Forest University this fall, in real life.  “It’s really hard because if you see how I interact with the cast, I’m really bubbly, always laughing with everyone. I’m always giving people hugs or just trying to lift everyone’s spirits up. Then it’s like I get on stage and I have to be intimidating. Or, on stage when I’m interacting with the cast, I have to push people out of the way or something. Then I always feel bad afterwards and I’m like, ‘I promise you I’m not doing it as myself! Just the character!’ The hardest part of this whole thing is the laugh. I start trying to do an evil laugh and then I start giggling and I can’t do it.” 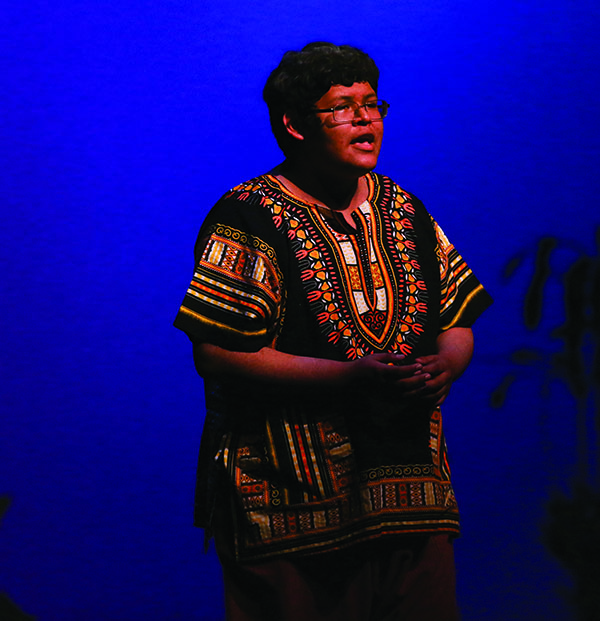 Tissue said she likes the way musical theatre and the arts can transform a student.  “I think the part I love the most is seeing a student come in that maybe is painfully shy or you can see that there’s a lot of trauma background, some of those things, and then theater becomes their safe place, a place where they can have a positive creative outlet to get some of that out to express themselves. Once they find that it’s a safe place, they start to open up a little bit more. Out of all the school, it might be the one class out of the day that they enjoy coming to and it gives them a reason to come to school. That’s really what elective classes in the arts are all about. It’s about giving people an outlet and a creative positive way to express themselves.”

She said the positivity exuded by the students was wonderful.  “These kids, on top of the pandemic, they had a big transition of staff this year, of leadership in the program with myself stepping in to lead this program, and they came through that transition just seamlessly. These kids just jumped on board and they were ready to be looking forward, not looking back. I’m so proud of that and had it not been for that positive attitude, this wouldn’t be happening. I so appreciate them and their willingness to follow.”

Performing on stage has boosted the confidence of these students.  Davis noted, “I used to be really insecure about who I am as a person and I think this has really helped because it gives that sense that these people are welcoming me. It’s a second home. Being on the stage and the lights hitting you gives you like, ‘Nobody can tell you what to do in this moment’ and I’m just going to do it. It’s just free.”

Having been performing for years, she added, “Growing up in theater, it was so interesting to me seeing my seniors and how they’ve affected me and how they almost protected me and brought me up. It’s interesting this year knowing that I’m the senior and I’m trying to be that good example and trying to be kind to everyone and make sure everyone feels included. I think that’s interesting, and it helps us as individuals to grow.” 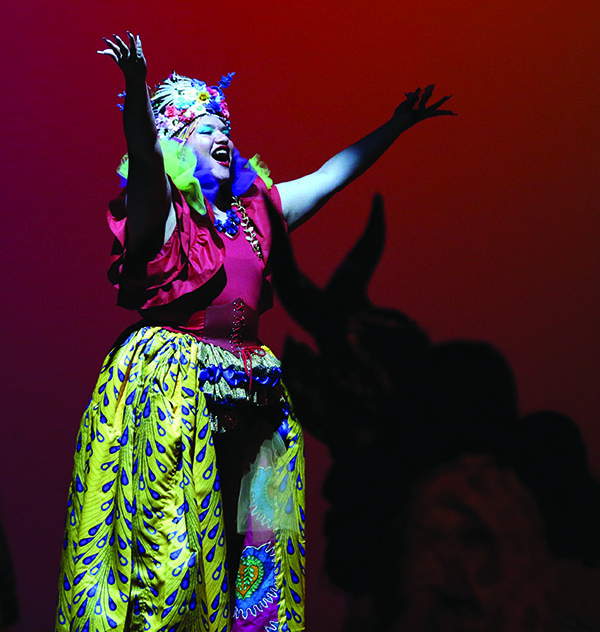 When asked what advice they’d give to fellow students thinking of entering the musical theatre at Cherokee High School, the students were very positive.  Autumn Greene, a junior who plays Erzulie, the Goddess of Love, said, “Honestly, just do it.”

Dominyk Arch, a junior who plays Agwe’, God of Water, said, “It may sound corny, but it (theatre) gives you a reason to leave everything else in your day-to-day life behind you and gives you a reason to do something else.  Speaking of having that spark, I remember watching ‘Shrek’, and I was just sitting out in the audience and my friends and I came out in ‘Aladdin’.”

Davis commented, “Just try it. You might find out that it’s not your cup of tea and you may be one of the persons that you want to be like lead role and you’re on the stage the whole time. But, like Abigail mentioned ensemble – that’s a really good thing to have. Being in the background just dancing and smiling away, you’re not really the center of attention, but you’re still being seen.”

Taylor summed up their sentiments stating, “If nothing else, you gain confidence in yourself and make some new friends. It’s a good place to find a sense of community or home.”

“When I first came in, the first song I ever sang said, ‘I’m as mild and as meek as a mouse.’ That’s the song I sang and I sang it so quietly and now here I am in my senior year and I’m being the God of Death. It’s a sense of growth, even if you don’t see it right away. I’m also a completely different person from where I was freshman year to now.”