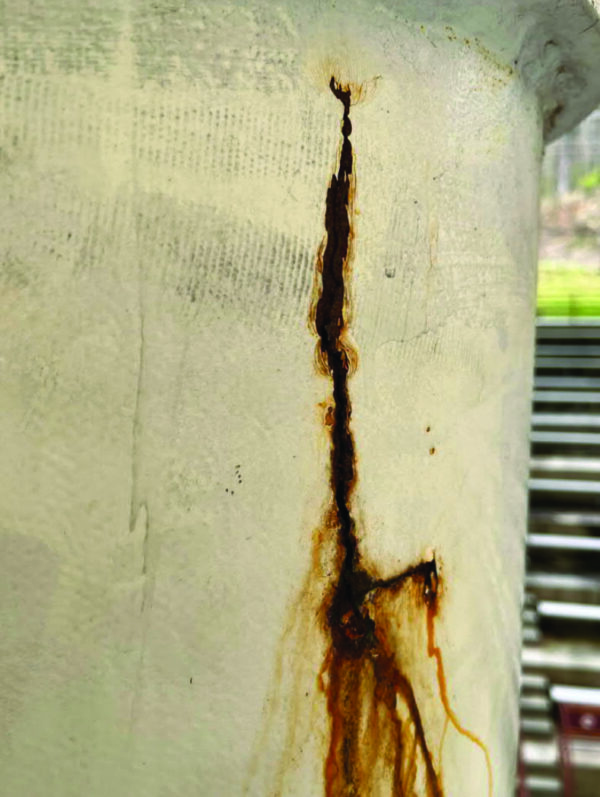 According to a report from Phoenix Engineering and Consulting, Inc., based in Woodstock, Ga., there is a five-inch crack in one of the vertical legs of the canopy at the Fairgrounds. (Photo courtesy EBCI Project Management)

“The move of the location for the Cherokee Indian Fair is a change none of us expected, but I hope it’s one we all come to welcome,” Principal Chief Richard G. Sneed said in a statement to the One Feather.  “We have a great opportunity to turn this negative news into something extremely positive for our community.”

He added, “Updates to the current Fairgrounds and Exhibit Hall are long overdue.  This challenge gives us the chance to create a wonderful venue for EBCI (Eastern Band of Cherokee Indians) citizens and visitors to enjoy for years to come.  This renovation is just the first phase in a strategic revitalization of downtown Cherokee.”

The Fair Committee met with tribal officials from the Division of Commerce and from EBCI Project Management on Wednesday morning to discuss the safety issues which stem from a crack found in one of the support tubes on the canvas top over the amphitheater.  According to a report from Phoenix Engineering and Consulting, Inc., based in Woodstock, Ga., there is a five-inch crack in one of the vertical legs of the canopy at the Fairgrounds.

Travis Sneed, EBCI Project Management director of support services, said, “What we’re seeing is the first stages of a structural failure.  The engineering firm and EBCI Risk Management have determined that it is unsafe to be under it (canopy) from this point on…a high wind event could come through and cause considerable damage or cause it to fail.  So, at this point, we don’t want anyone to be underneath it.”

Chris Greene, EBCI Project Management, noted, “If this fails, there’s no telling where these cables could go.”

Chris McCoy, EBCI Secretary of Commerce, said, “We’re moving forward.  We’re taking down the canopy.  It’s tragic, but we’re doing it safely and we’re going to do it with the team that put it up…it’s going to create some opportunities for the whole community that I’m sure they’ll get excited about.”

He said safety is of the utmost importance.  “But, in reality, with our conversations with Risk Management, Business Committee, and the Chief, we’re not going to have the Fair at the Fairgrounds this year.  So, we have to get our minds wrapped around how do we move this forward and have a successful event this year, and next year probably, on the new site.”

During Wednesday’s meetings, the Fair Committee and EBCI Commerce staff agreed to have weekly meetings to make sure the different components of the Fair come together well at the new site. 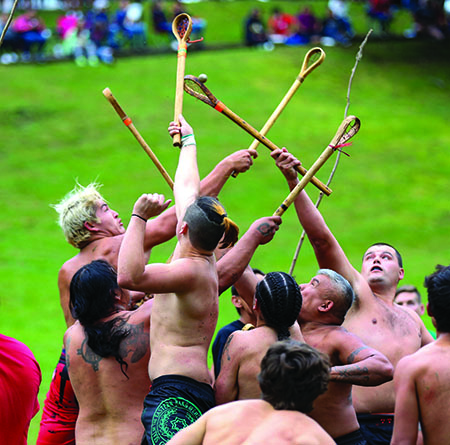 The Wolftown and Hummingbird stickball teams battle it out at the UNITY Field on Oct. 5, 2021. The 2022 Cherokee Indian Fair will be held at the old Cherokee Elementary School site instead of the Cherokee Indian Fairgrounds, but it is reported that stickball will still be held at the UNITY Field site. Last year’s Fair was cancelled, but some events did occur such as stickball. (SCOTT MCKIE B.P./One Feather photo)

“In our community, we always step up to the plate and make it happen,” said Vicki Cruz, a member of the Fair Committee.  “I feel like we’re just going to our roots and the traditional old fairs.  We’ll make it happen.”

Denise Ballard, Fair Committee member, agreed, “We’ve got to get excited about it…we’re on board and we’re going now to drive around and see what we can visualize.”

McCoy noted, “We’re going to take this week to see what resources we have for the event and build an infrastructure plan first.  Then, we’ll go seek the funding and work with our tribal departments to get this mitigated into an event site.”

McCoy said the reconstruction at the existing Fairgrounds will take 18 to 24 months.  “We’ll probably be at this site (old elementary school) for two years.”

He said staff will go out of their way to make the Fair run as smoothly as possible.  “We want to make this a great event for the community.  We’re not going to fold and quit.  We’re going to do this.  The Fairgrounds is dilapidated and it’s time for an upgrade.”