The Top Forty Under 40 list of young executives in Alaska was announced recently by the Alaska Journal of Commerce and the Anchorage Daily News, and a member of the Eastern Band of Cherokee Indians made the cut.  Abbey Jackson, who serves as the director of rehabilitation services for the Alaska Native Medical Center in Anchorage, was included on this prestigious list. 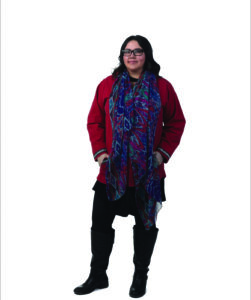 “My reaction was shock and gratefulness,” Jackson said of hearing she was included.  “There were hundreds of applicants to choose from, and to be nominated and chosen as a Top Forty Under 40 candidate was humbling.”

According to the Alaska Journal of Commerce, there were 288 nominees for the 2022 listing.  An awards event will be held on Friday, May 20 at the Hotel Captain Cook in Anchorage.

Jackson has worked for the Alaska Medical Native Center for almost 10 years and currently is the rehabilitation services director which oversees adult physical therapy, occupational therapy, and speech language pathology.

She also served with the Center’s Incident Command Team during the COVID-19 response.  “I was involved with the Operations role in incident command. During the pandemic, it was our team’s job to gather information, put people and things in place, and roll out all the changes that were tasked of us during the pandemic.”

Jackson added, “We faced many challenges over the past two years. The biggest issue was the idea of the unknown with the virus and the supply chain issues for personal protective equipment. We had to get very creative to make things work. Some of the hardships were the time and toll it took on all of our staff. Staff burnout and work life balance was a struggle, and we are still seeing the results of that today.”

She went on to say, “Some of the successes on the other hand was that we had the gift of time. We saw what was happening in other countries and on the east coast and we were able to put plans and processes in place to protect not only our patients but also our staff. We worked together during the pandemic and led the way for testing in the state of Alaska including our rural villages and we were also one of the first places to offer the COVID vaccine to not only our people but the whole community. It is truly remarkable looking back at all the things that were accomplished in such a short amount of time.”

Jackson noted that she really enjoys her job.  “I enjoy the people! I enjoy my team. I enjoy the overwhelming support from leadership not only in times of crisis but in day-to-day operations.”

Dr. Robert Onders, Alaska Native Medical Center administrator, nominated Jackson for the award.  In his nomination letter, he wrote, “Abbey Jackson is a hard-working, motivated individual whose accomplishments and success in improving access to care for patients needing rehabilitation services is widely recognized.  Ms. Jackson’s work serves as a role model for others in the health care field.”

He also wrote, “Abbey Jackson’s efforts allowed the Rehabilitation Services team to safely treat COVID-19 patients while providing quality care to existing patients.  Her service is in every way aligned with ANTHC’s vision and mission to ‘provide the highest quality health services and help make Alaska Native people the healthiest people in the world’.”

She holds a Bachelor of Arts Degree in Justice (minor in psychology) and a Master of Public Administration Degree with an emphasis in Justice from the University of Alaska – Anchorage.

Jackson is grateful for the support she has received, “I would have to say my parents, Mark and Sherri Jackson, deserve all the thanks for teaching me work ethic and to never quit even when things are hard. I think that foundation was extremely important to have especially over these past few difficult years.  I would also like to thank my current supervisor and mentor Vivian Echavarria. She has been instrumental in my growth and development as a leader here at ANMC and I am grateful for the leadership skills I have learned and continue to learn from her.”