The color red, the official color of the MMIW (Missing and Murdered Indigenous Women) movement,  marked the day in the form of ribbon skirts, t-shirts, badges, and more as Cherokee community members took awareness of a crisis to the streets.  The 3rd Annual EBCI (Eastern Band of Cherokee Indians) MMIW Walk was held in the Yellowhill Community on the afternoon of Saturday, April 30. 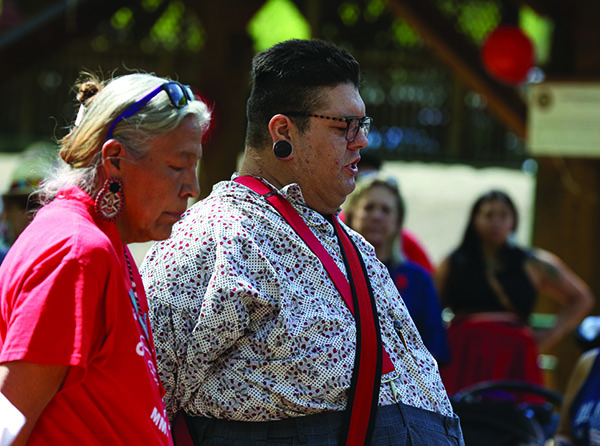 Keawe Bone, right, sings an honor song for all of the Missing and Murdered Indigenous Women (MMIW) throughout Indian Country during the opening of the 3rd Annual EBCI MMIW Walk held in Cherokee on the afternoon of Saturday, April 30. Mary “Missy” Crowe, left, along with Loretta Bolden and Lea Wolf, was one of the organizers of the event. (SCOTT MCKIE B.P./One Feather photos)

“Say their names!” exclaimed Loretta Bolden as over 200 people shouted out the names of 23 women of the EBCI who have gone missing or have been murdered – their names sounded loudly so as never to be forgotten.  Bolden was one of the organizers of Saturday’s event along with Mary “Missy” Crowe and Lea Wolf.

“Women are the ones who raise us, who bring us into this world. And for them to be taken out of it is unthinkable,” said Keawe Bone who opened Saturday’s event with an honor song for all MMIW across Indian Country.  “Today, as we gather here, I want you to think of not just the ones that have been lost but also the ones that could be. We need to protect our aunties, our mothers, our sisters, our nieces – all of those who build our future, who gave us the lives that we have today and the lives that we will have tomorrow. If we do not have them at the forefront of our minds, we are lost.”

He added, “Our teachings tell us to treat everyone’s existence as sacred and important. We shouldn’t have to do this for our women, our mothers, our aunties. But you all gathered here today with them in your heart – thank you for existing. Thank you for carrying the message.”

Vice Chief Alan B. Ensley thanked the organizers of the event.  “Our Cherokee culture teaches us how important the women are.  I’m honored to be here today to honor the missing and murdered women. I think when it comes to all Native women and all Natives together and become one, and be united as one, I think we can fight any battle that’s thrown at us. This is just one occasion.”

“We’ve got to stay united to fight any fight and this is a good cause and a great start.”

Principal Chief Richard G. Sneed said, “With your presence here today, we stand for those who can no longer stand for themselves. We walk today for those who can no longer walk for themselves, they’re not with us anymore. But, most importantly, we’re here to raise a voice and to bring awareness in our communities, and the communities surrounding us, and all across this nation.” 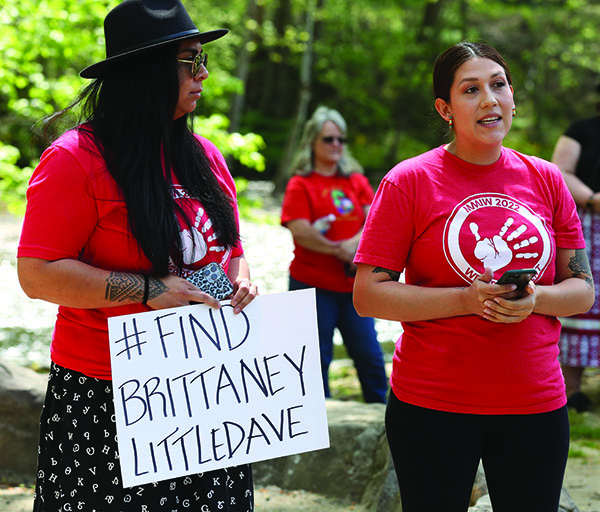 Maggie Jackson, right, speaks prior to the walk starting as Sheyahshe Littledave holds a sign recognizing her cousin who is currently missing. Along with Ahli-sha Stephens, Jackson and Littledave produce and host the “We Are Resilient” podcast which focuses on MMIW cold cases.

He spoke of the need to address jurisdictional issues affecting all tribes.  “Most people don’t understand that tribes don’t have the authority or the jurisdiction to arrest or prosecute men who commit acts of domestic violence against Native women unless that tribe has adopted VAWA (Violence Against Women Act), which we have. We are one of only 14 tribes in the country that have.”

He went on to say, ““So, we’re here today to raise a voice to say ‘It stops today’…We are going to continue to push for our rights, for the ability to prosecute, and for our sovereignty as a tribal nation.  I say ‘Sgi’ to everybody here today because you represent all of those who can no longer have a voice. And today we’re their voice.  Let’s not have it stop here. Let’s keep all of this happening and let’s raise awareness all across this country.”

Maggie Jackson is part of a podcast called “We Are Resilient”, along with Sheyahshe Littledave and Ahli-sha Stephens, which highlights MMIW cold cases.  “The MMIW movement is a grass roots effort that advocates to end violence against Native women. The statistics around violence that Native women are susceptible to is that four out of five women will experience violence in their lifetime.”

She spoke of the issues surrounding MMIW cases.  “The efforts around capturing statistics around MMIW cases is basically non-existent…In order to end this narrative that our Native women don’t matter, we must help bring awareness, not only to the issues at hand, but also bring awareness to the specific cases that lack justice.”

Littledave, herself a domestic violence survivor, is currently dealing with a family member that has gone missing.  “In September last year I learned that my cousin, Brittaney Littledave, was missing. Since that time, it has been almost seven months of silence. The silence is scary. The not knowing is scary. But, I will tell you this, having a family member as an MMIW, you face uncertainty daily. You desperately try to keep your loved one at the forefront of the news, praying that people don’t just scroll by her face on social media – hoping for the best, but preparing for the worst.”

She applauded the group present at Saturday’s event.  “Let’s keep this energy all year round. Let’s work together. This epidemic affects us all. These women were mothers, sisters, cousins, friends, co-workers. They were artists, painters, beaders, rug-weavers, hair stylists, pow wow dancers, speakers. They were women whose smile lit up a room. They played outside with their cousins. They played basketball and hung out with friends. These women are us. They need us to be their voice and they need us to say their names.” 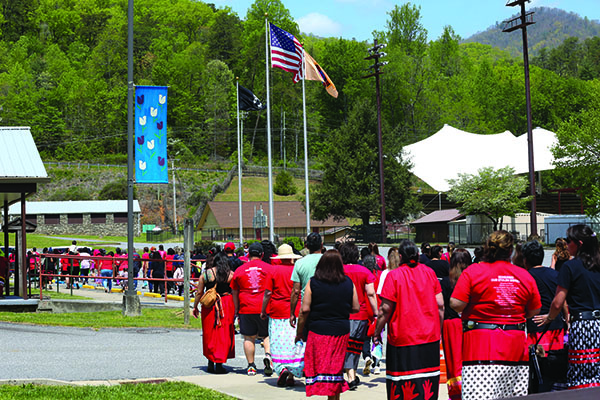 Walkers approach the Tribal Council House. The group stopped and held a group prayer before finishing the walk.

Marsha Jackson, EBCI Domestic Violence and Sexual Assault Program, spoke of the need for such events.  “Many Americans are unaware of this issue. That’s why we’re here today. We’re going to put a voice to those voices that haven’t been heard…We are the fire-keepers for our people and we are here today to bring that fire back, to gather and stand for each other and for the sisters that we don’t know about. For the ones that didn’t have a voice. For the ones that didn’t get the opportunity to speak. For the family members that can’t be here to represent those.”

Mary “Missy” Crowe said the lack of visibility of MMIW cases is disheartening.  “We had a young caucasian lady that went missing just a couple months back and the whole world was looking for her. That’s all that our families want. That’s all we want for our sisters is to have that same attention, to have that same respect.”

Thursday, May 5 is the National Day of Awareness for Missing and Murdered Indigenous Women, and a candlelight vigil is being held at the Unity Field in Cherokee starting at 7 p.m.