Jessica Mrugala has been focused on a healthier Cherokee for years.

She started working with Cherokee Central Schools in 2017 and has been a service member on the Qualla Boundary since. Currently, Mrugala works as the Local Food Extension Agent for NC Cooperative Extension in Cherokee. She has also been working with EmPOWERing Mountain Food Systems to support local farmers and connecting them with the community. 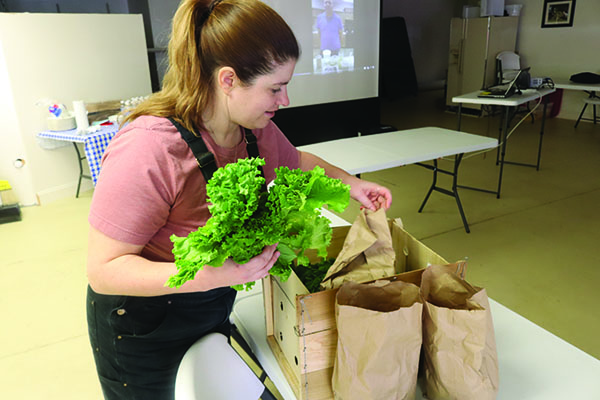 Jessica Mrugala, a local food extension agent for N.C. Cooperative Extension, looks through one of the 30 food boxes that was delivered to Cherokee weekly during the program. (JONAH LOSSIAH/One Feather photos)

Part of Mrugala’s duties in 2022 has been leading Harvest Health, a produce prescription program run through her office to promote healthy habits with eating and cooking. The effort had two sites, each with 30 participants. The Cherokee operation was based out of the Cooperative Extension office on the boundary. The other partnered with Vecinos, ‘a non-profit agency and free community health clinic based at Western Carolina University serving the Latino and farm worker community in Western North Carolina’.

These programs launched in January of 2022 and ran for 12 weeks. It partnered with Darnell Farms to get the freshest greens, vegetables, meat, and dairy possible. They sourced locally whenever possible. The program also provided cooking kits to assist in the kitchen that included quality chefs knifes, immersion blenders, and other tools.

Mrugala said there were a few points of focus when developing this program. They wanted to remove barriers for entry, create a full-circle connection, and work at creating positive habits. She attributes success of the program to the detailed approach her team took.

“I think since we took the time. I mean, we were working on this program and what it would look like for a year. Because we did that and we took the time to talk to Cherokee folks about what they wanted to see, I think that’s why it was successful. We took time to listen and ask questions. That’s when folks brought up that transportation is going to be an issue. How do you make sure that people can come and get to these boxes? That’s why we were able to write gas cards into the budget. We learned that internet was going to be a problem. Not everyone was going to be able to access these videos. So, we were able to pivot and stream them from the extension classroom during pickup,” said Mrugala

She said that the program began growing legs last year at Western Carolina University (WCU). Mrugala was approached by Dr. Patrick Baron, assistant professor at WCU and director of the Integrated Health Sciences program. He asked Mrugala if she had a project for his class senior capstone class, HSCC 475. She pitched a version of this food prescription program and they soon got to work.

“For the semester I met with those students twice a week sometimes and worked with them to do a giant feasibility study. I led the students in researching different produce prescription programs globally. From that, they picked out threads that might work here, based on those other programs.”

That collaboration has continued as the results have poured in through the two pilot sites. In Cherokee, the 30 participants are equally split between folks from Cherokee Food Distribution and Cherokee Indian Hospital nutrition patients. 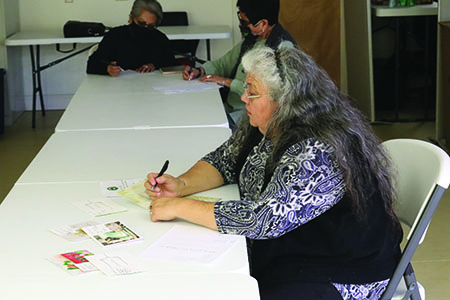 Jeanne Crowe sits in on a class during produce box pickup at Cooperative Extension.

One of these participants was Jeanne Crowe. She said the program has helped her and her family in many ways.

“I enjoy the variety of vegetables. I’ve seen them in the stores, but as far as trying to cook or eating any of them, I’ve never done that. Because I didn’t know what they were until this program. They explain things to you. I’m a diabetic. Since the program started, my A1C has gone down quite a bit,” said Crowe.

She said that the entire program has had a community feel. She said that she could call or text any of the instructors if they had concerns or questions. Crowe thought the cooking instructions were also tremendously helpful for understanding what to do with the fresh food they were getting. The program collaborated with Mark Greenfield, who is a chef in France and the brother-in-law of Cherokee Indian Hospital Manager, Nilofer Couture. They also streamed videos with Uncomplicated Kitchens and had content made by Rose James of Tribal Food Distribution and Ulela Harris of Cherokee Indian Hospital.

“The videos with Chef Mark and Uncomplicated Kitchens. Those videos, that’s helped a lot. In regard to the recipes that they shared with us. We take pictures of the dishes that we do from those recipes and share them with the program and other folks. It’s been an inspiration, I’ll tell you that.”

Crowe said that she hasn’t even missed the unhealthier options that her family used to eat consistently. She said it’s been all about learning how to properly cook the right ingredients.

“If there’s things in there that my family likes and we eat it up real quick, I’ll go to the store and I’ll buy that same product again. Or I’ll go to Darnell’s, because Darnell’s is closer to me than the grocery store. We use more vegetables and fruits,” she said. “Even my little granddaughter, she’s really enjoyed it. I explain it to her. When she gets in the car she says, ‘Nanna did you bring me some healthy snacks?’ So, yeah. It’s even trickled down to her. It’s been good.”

Crowe said that she is going to be talking with Tribal leaders to ensure they know how beneficial the program has been.

“I hate to see that it’s here at an end because I’ve been for each of the classes. Totally enjoyed every one.”

Mrugala said that she is hopeful Harvest Health has a future. The studies and findings will be presented at the end of April, and she said she is currently working on receiving funding from multiple sources.

“There is so much grant funding out there … but we’re keeping those dollars siloed. The beauty of this program is because EmPowering Mountain Food Systems had the capacity – which was me – to be that connector and logistics coordinator. We were able to integrate a really intense program. But it was worth it because we’re seeing behavioral changes. Our midpoint assessment showed that within six weeks, 75% of our participants were feeling better,” said Mrugala.

She said this model is something she could see working all across the region. However, she said the coordinator position is essential to get the gears turning.

“That’s the big point. This program can be replicated by so many different people in Cherokee. But also, I firmly believe nationwide. This is a really good model. I think as long as you have somebody connecting the farmer and the classes.”

Depending on funding options and how they want to move forward, Mrugala already knows the functions and the costs of running this operation. She said she didn’t want to skimp the details to ensure the biggest impact, especially for the pilot.

“I probably spent 150,000 dollars for three months on the two sites. 30 families in each site, so that’s 60 food boxes a week. These food boxes were valued at like 75 dollars each. Because we wanted folks to experience local meat and cheese. Local cream from Mills River. Everyone got those essential cooking kits, there were a lot of immersion blenders. So, it’s an expensive program. Absolutely. But for lasting impact that will ultimately support our local farmers and put money back into the economy and take care of the land, it’s worth it.”

Mrugala mentioned that if they are able to run Harvest Health in Cherokee again, they are hopeful to implement more in-person functions like they had with their Vecinos operation. She said that they would like to be able to operate with the community clubs in order to increase convenience and have more kitchen options.

She said that she is hopeful programs like this can facilitate a healthier community throughout Cherokee.

“Diet and wellness are so interconnected. It’s intersectional with things like low living wages, stress and trauma, and what’s accessible. I mean, we have one grocery store. And when you’re exhausted from raising a bunch of kids and working and maybe not being able to make ends meet, yeah you’re going to go to McDonalds. It’s just that intersection of stress, and I really don’t think we can tackle diet and wellness until we look at the deeper causes of stress and trauma here. That’s why I’m really passionate about creating programming that tries to remove as many barriers as possible. Because when there are barriers, it’s even more stress.”

The next step to compile the research and fight for funding. Mrugala said that she will do everything she can to try to establish this is a consistent program in Cherokee. The hope is to have the lingering questions around money and timing sorted in the next few months.