With the smell of white sage in the air, an American Bald Eagle flew over the Unity Field in Cherokee on the warm spring evening of Thursday, May 5.  Members of the Eastern Band of Cherokee Indians (EBCI) were present honoring missing and murdered women of the Tribe at a candlelight vigil held on the National Day of Awareness for MMIW (Missing and Murdered Indigenous Women). 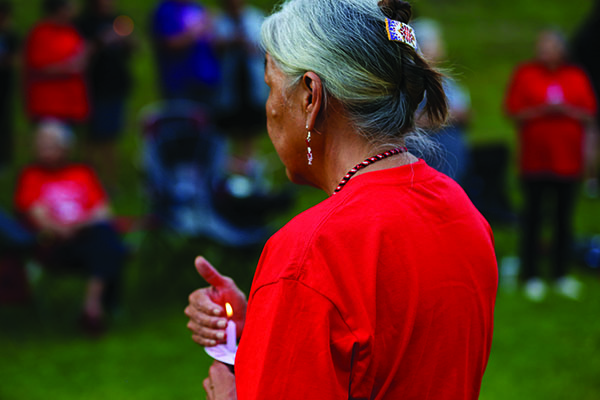 Mary “Missy” Crowe, a member of the Eastern Band of Cherokee Indians and an organizer of MMIW events on the Qualla Boundary, holds a candle during the MMIW Candlelight Vigil held at the Unity Field in Cherokee on the evening of Thursday, May 5. (SCOTT MCKIE B.P./One Feather photos)

“We have to deal with a lot of different issues here, different situations, different things that happen that cause our missing and murdered women,” Mary “Missy” Crowe, an EBCI tribal member, told the crowd gathered at the vigil.  “With us, a lot of times we know it’s because of domestic violence.”

Crowe, a co-organizer of MMIW events in Cherokee along with Loretta Bolden and Lea Wolf, told the crowd that they are currently organizing an official EBCI MMIW Chapter and hope to have it going very soon.  “That’s one thing that I want to see with us organizing this chapter together is to really support our families of the victims – not just work to bring justice to those that murdered our sisters, but to help these families and to help these children.”

Principal Chief Richard G. Sneed proclaimed May 5 as the “Day of Awareness for Missing and Murdered Indigenous Women on the Qualla Boundary”.

In his proclamation, Chief Sneed wrote, “…the Cherokee people traditionally were a matrilineal society, holding great reverence for the role of women in our society; and Native Nations have struggled to protect our lands and citizens after the Supreme Court ruling commonly referred to as the Oliphant case in 1978, which limited the rights of Native Nations to have jurisdiction over non-Natives on tribal lands.”

It continues, “…Native Nations continue to fight for our sovereign rights to protect our citizens and community members as Native women are the victims of domestic and sexual abuse at a far greater incidence than non-Natives.” 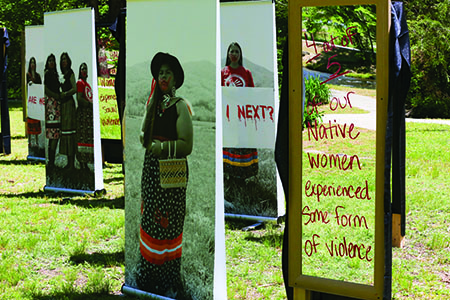 An “immersive artistic experience” entitled “Where She Walked” was installed on the Oconaluftee Island Park. The exhibit included photographs of EBCI women, wearing some identifier of the MMIW movement – red ribbon skirts, red shirts, red handprints painted on their faces, etc., along with statistics about the rate of violence against American Indian/Alaska Native women. The photographs were taken by Dylan Rose, an EBCI tribal member, and the installation was a collaboration with EBCI Communications.

Bolden commented, “As you think about yourselves and your families, and lift up yourselves, lift these families up that have lost people. As they shared their stories, it’s hard to fathom how they feel, how they came up.”

She said that support for and from the entire EBCI community is needed.  “These families here have lost someone and they’re not going to be able to come home. It’s hard to look at them and know that you can’t be in their place. Your heart hurts for them. You hurt for them. But, it’s hard not to be able to go up to them and give them a hug. When you see them out in the community, go up and hug them. Give them a hug and say ‘I’m thinking about you’ or ‘I’m praying for you’.”

Bolden is also ready for the EBCI MMIW Chapter to come to fruition.  “I hope this chapter that we’re getting together that all of you will get behind us and support us in getting our own chapter here so that we can get funding to look into these things. That our Council, our Chief, our Vice Chief will get behind us and have a task force to help solve these murders that are not solved yet. I know it won’t bring anyone else any more comfort but it will bring peace to know that someone is being punished for what they’ve done.”

At the end of Thursday’s candlelight vigil, wooden signs emblazoned with the names of EBCI missing and murdered women were given to family members present.

Earlier in the day, an “immersive artistic experience” entitled “Where She Walked” was installed on the Oconaluftee Island Park.  The exhibit included photographs of EBCI women, wearing some identifier of the MMIW movement – red ribbon skirts, red shirts, red handprints painted on their faces, etc., along with statistics about the rate of violence against American Indian/Alaska Native women.  The photographs were taken by Dylan Rose, an EBCI tribal member, and the installation was a collaboration with EBCI Communications.

Rose said MMIW is close to his heart.  “The MMIW movement holds a significant place in my heart. Capturing the raw emotions through imagery to bring the everlasting emotions of the MMIW movement to life is something I am deeply passionate about. My involvement in the movement is driven in honor of my great-grandmother, Dora Owl, who was wrongfully murdered in her early twenties by an unknown perpetrator. My great grandmother was mistaken for another woman, taken deep into the mountains, and murdered her for something she had nothing to do with. What the killer did not know is that the bullet did not kill her instantly. She survived the bullet long enough to crawl her way to a nearby road where she was picked up and later pronounced dead upon arrival at the hospital. The emotions of losing my great grandmother can still be felt through generations of my family today. My grandmother, Kathy Owl, was a newborn at the time and left to figure out her way through the world alone. The decision the killer made that day caused ripples of emotions 70 years later. That decision put my grandmother through an immense amount of stress as she was later placed into the boarding school. What happened to my great grandmother has contributed to my passions around this. As a man, it’s my job to ensure the protection and security for all women within my tribe and throughout all Indian Country. It’s time for our men and women to band together to stop all violence on our women. I will continue to put myself on the frontlines to make sure our sisters’ voices are heard.”

MMIW events were held throughout the country. 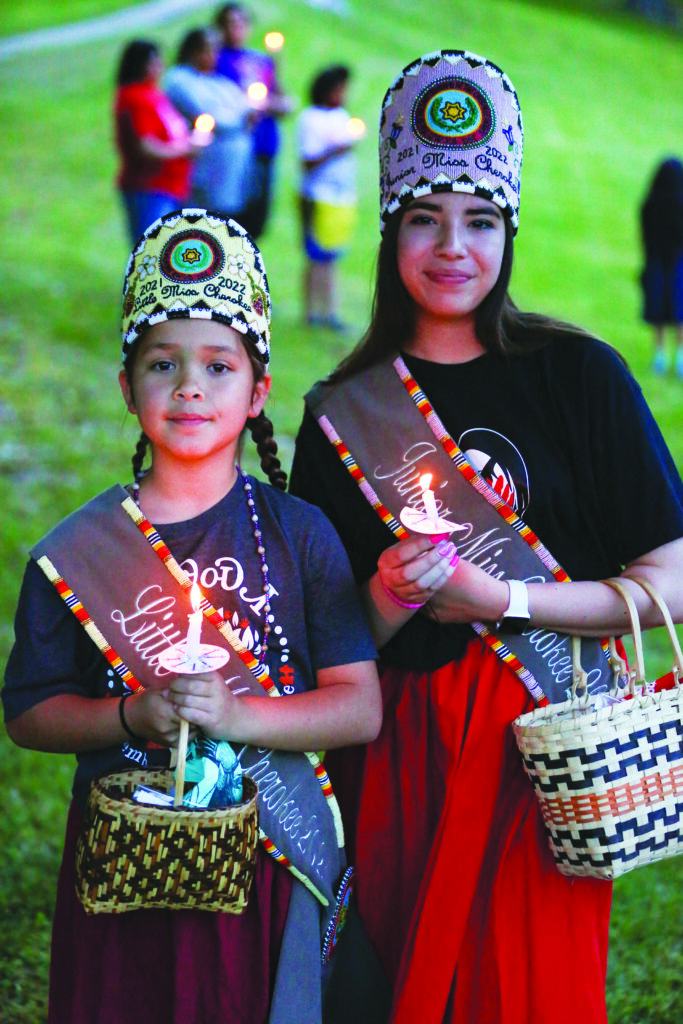 President Joseph Biden issued a proclamation on May 5 stating, “For generations, Indigenous persons, including American Indians, Alaska Natives, and Native Hawaiians, have been forced to mourn a missing or murdered loved one without the answers and support they deserve.  On Missing or Murdered Indigenous Persons Awareness Day, we remember these victims and their families, and commit to working with tribal nations and Native communities to achieve justice and healing.”

The proclamation went on to state, “This March, I signed into law the Violence Against Women Act Reauthorization Act of 2022.  This important law expands special criminal jurisdiction of tribal courts to cover non-Native perpetrators of sexual assault, child abuse, stalking, sex trafficking, and assaults on tribal law enforcement officers on tribal lands and supports the development of a pilot program to enhance access to safety for survivors in Alaska Native villages.  My administration understands that Native people, particularly survivors of violence, know best what their communities need to feel safe.  That is why we must work hand-in-hand with tribal partners through each phase of the justice system to create solutions that are victim-centered, trauma-informed, and culturally appropriate.”

The Department of Justice (DOJ) and the Department of the Interior (DOI) marked the day with several major announcements.  A new position was announced – the National Native American Outreach Services liaison which “will help ensure that victims and their families have a voice within the Department as they navigate all stages of the criminal justice system” stated information from the DOJ.  The members of the newly-formed Not Invisible Act Commission were also announced.

Secretary of the Interior Deb Haaland, a member of the Laguna Pueblo, commented, “Everyone deserves to feel safe in their community, but a lack of urgency, transparency, and coordination have hampered our country’s efforts to combat violence against American Indians and Alaska Natives.  As we work with the Department of Justice to prioritize the national crisis of missing and murdered Indigenous peoples, the Not Invisible Act Commission will help address its underlying roots by ensuring the voices of those impacted by violence against Native people are included in our quest to implement solutions.”

U.S. Attorney General Merrick B. Garland said on Thursday, “The Justice Department is committed to addressing the crisis of missing or murdered Indigenous persons with the urgency it demands.  That commitment is reflected in the strength of our partnerships across the federal government, including the Department of the Interior as we take the next steps in launching the Not Invisible Act Commission.  The Commissioners announced today will play a critical role in our efforts to better meet the public safety needs of Native communities.  The Justice Department will continue to work alongside our tribal partners with respect, sincerity, and a shared interest in the wellbeing of tribal communities.”

According to DOI information, the Not Invisible Act Commission’s purpose “is to make recommendations to the Departments of the Interior and Justice to improve intergovernmental coordination and establish best practices for state, tribal, and federal law enforcement; to bolster resources for survivors and victim’s families; and to combat the epidemic of missing persons, murder, and trafficking of Native Americans and Alaska Natives.”