A new short film entitled “Stripper” was written, directed, and produced by Anthony Sneed, a member of the Eastern Band of Cherokee Indians.  In fact, the movie was shot in Cherokee, and all but one of the speaking parts went to EBCI tribal members. 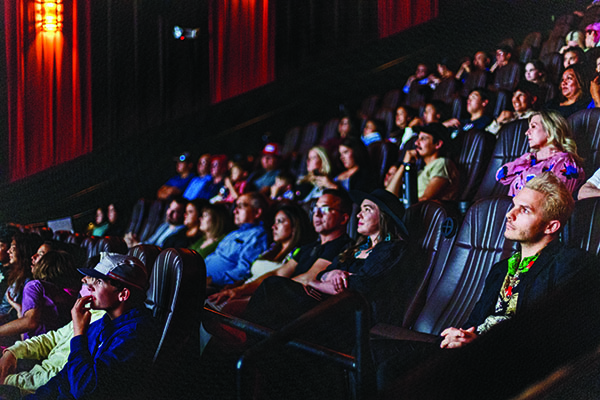 Viewers pack the Cherokee Cinemas and More theatre recently to screen a new short movie entitled “Stripper” which was written, directed, and produced by Anthony Sneed (shown seated at right), a member of the Eastern Band of Cherokee Indians. (Photo by Kristy Herron/EBCI Communications)

The IMDb page for “Stripper” describes the movie as, “After signs that his mother might be stripping at a nightclub, a young boy ventures out to prove to his friends that the rumors are wrong.”

That young boy is Fenix Taylor who played the part of Cricket.  “It was tiring,” he said of the shoot schedule.  “We had a lot of long days and filmed all day long.  It was something new and exciting, and I had a lot of fun with everyone who was a part of the film.”

“Going to the Skate Park to film was fun – feeling like it was just a normal day,” said Taylor.  “I really enjoyed meeting everyone and learning how films are made.”

The film was screened recently at the Cherokee Cinemas and More.

He added, “Seeing Cherokee and local kids on the screen in the theater was awesome.  It was exciting getting to watch myself in the theater with my close friends and family.”

Rattler said of his experience, “I didn’t know what to expect, but Anthony (Sneed) has a really cool way about him that helped us all relax and just have fun with it.  I didn’t even mind the 7,000 takes of the same scene.”

He said everyone just clicked on-screen.  “I think it’s super special we all got to be a part of something that represents our community and culture.  I just wish there were more opportunities around here for Native roles and actors.  It was fun to film, but seeing the final product was so cool.  It’s completely different seeing it all put together than filming it.”

Maggie Jackson, an EBCI tribal member, was an extra in the movie and is the real-life mother of Taylor.  “Anthony came to Cherokee with the intention of finding kids who had zero acting experience but were coachable and spent the entire week of filming focused on ensuring that the boys felt comfortable. Watching parts of the filming process was remarkable.”

She added, “Anthony and his crew spent countless hours coaching the boys, building a relationship with them and encouraging them to step outside of their comfort zones. The film crew and cast filmed for one week and many of those days were 12-14 hour days and the boys in the film were always eager and cooperative despite being tired. It was such a great opportunity for four boys from a small town and one that I hope they remember for the rest of their lives.”

Sneed said the project was one he’s been waiting to make for a while.  “Having just attended the American Film Institute (AFI) in Los Angeles, it was next to impossible to shoot anything with Cherokee actors since we had to shoot in LA. So the first chance I had post-school, I came to Cherokee to make this. This story I had previously written so kids were the center of the story from day one.”

This short is just the start for Sneed.  “Another reason I wanted to do a short in Cherokee was to set the stage for bigger projects I have plans and dreams for. I’m currently shooting a stickball documentary but also writing a feature-length film where a group of Cherokee robs the casino armored truck.  My goal as a filmmaker is to show a side of our people that Hollywood has historically missed. The side of us that is as human as anyone else. The side of us that goes to the gas station as well the stomp dance. I, myself, still have so much to learn, but I do know there are things that I can do right now to help.”

Sneed wants to see more proper Native representation in film.  “I’m sick and tired of us being portrayed in film in one of two ways: there’s a murder on the rez and the FBI agent comes into town to save the day (usually involving a drunken Indian somewhere) or a historical film with again, another white savior.”

He said the entire process of making “Stripper” has been emotional.  “Filmmaking is an art that depletes all of your resources and humbles you.  I believe God gave me a strong voice to speak up but also a sensitivity to feel and understand.  People keep coming up to me and talking about the film.  I’m so honored it made people proud.”

Sneed feels the film project has already exceeded any goals he had going into the process.  “My overall goal was to shoot a film in Cherokee with a Cherokee cast of non-actors, and we not only exceeded that goal but all of the boys have expressed a desire to pursue acting in the future!  I never would have imagined the impact this experience would have on these boys’ lives and my own.”

Rattler confirmed the impact and the pride, “I was really proud of myself and the other guys for representing our community and thankful to Anthony and the other crew for making it possible.”

Sneed went on to say, “In Cherokee, I hope this film can stand as a proof of concept and show people what we can do as a community.  I want to be able to raise funds for future projects and have the faith and trust of our Tribe.  This is only the beginning.”