The Fire Mountain Disc Golf Sanctuary is finished and preparing for its May grand opening.

The new 18-hole course is a project made through the collaboration of EBCI (Eastern Band of Cherokee Indians) Operations and Project Management. Disc Golf Design Group out of western North Carolina was hired on to design and build the course which has been welcoming a few visitors for the last few weeks. Holes are tucked away throughout the forest and the course has two difficulties, with red baskets setting a par-56 and gold baskets being a par-63. 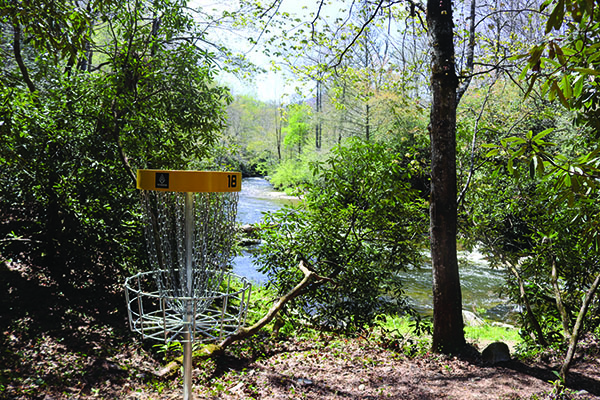 Chris Greene, manager of Project Management, said that it uses 31.59 acres of property. The course is located by Cherokee Central Schools, with the entrance adjacent to the Big Cove Community sign on Big Cove Road. Jeremy Hyatt, secretary of EBCI Operations, said that a grand opening and ribbon cutting is set for May 10.

“It was right around 14 to 15 months ago when I was talking to the Disc Golf Design Group. I took it to the Chief and gave him an idea of cost. It’s a no-brainer really. To have something that is so good for the community, good for the region at minimal cost to build, minimal cost to maintain,” said Hyatt.

He said that the total cost has been 180,000 dollars, and they are currently working on a maintenance contract for the future.

“It’s better to have professionals do this type of thing. I’ve said it over and over again as it relates to mountain biking or as it relates to this. We have some people that come up and do some of the bigger stuff. Like the road maintenance, we can handle that. But some of the other things that are specific to the golf course itself.”

Hyatt said they had to get creative when it came to brainstorming where the course would go.

“In many municipalities, you’ll find courses being laid out in parks and that sort of thing that already exist. We didn’t really have a good spot for that here in Cherokee. So, as I was talking to the guys from Disc Golf Design Group, they said ‘let’s come to Cherokee and let’s see if we can’t figure out a spot.’

The area selected runs along the river and is all in the floodplain, therefore no major structures can be built on the property. This makes planning anything else difficult, but it was just fine for what they needed. There was also already a path on the property to allow access to Water & Sewer for maintenance.

Hyatt said that part of the process was deciding how difficult to make the course. Given that they could create such an isolated space for the sport, they decided to give themselves as many options as possible moving forward. 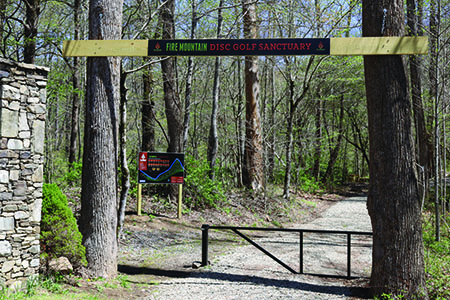 The entrance to the course is on Big Cove Road, just past Cherokee Central Schools.

Hyatt said that while disc golf is not something he has played much of, he has considered it a very attractive concept for Cherokee for some time. He said that disc golf is one of the fastest growing sports in the United States, and that something like this would be a huge amenity for the community.

“We want to bring people here. Outdoor recreation economy, we like that idea. But we also want to have something for our Tribal citizens that want to get out and enjoy the outdoors. This is a very low-cost, low-hanging fruit in terms of just getting outside.”

An issue that has continued to concern Hyatt is the need for more staff to run these new outdoor facilities. EBCI Operations currently oversees Fire Mountain Trails and now the disc golf sanctuary. He said this is not sustainable for their long-term vision of the project.

“Currently, I am managing it along with Project Management. I definitely want to keep them within the Operations purview, I’d love to do that. But we need somebody to own it. To oversee it. To make sure maintenance is taken care of. We also want someone to take care of public outreach and activation in the community.”

One of the few aspects of this project that is not yet underway is the parking situation. There is a gravel lot across the road that can accommodate a few cars, but that lot cannot handle a tournament.

“Immediately, we’re going to do a bit of improvement here. Just put some more gravel down, extend it a little bit, and maybe paint some lines on the ground, I don’t know. Right now, this is really all we have, which is not sustainable.”

Hyatt and Chris Greene said that they are nearly finished with a design for a new parking lot that will drastically expand parking in that area. It will feature a restroom and a path that will connect to Cherokee Central Schools (CCS). They said that this would add value to the lot, offering another space for the school to use.

“It could potentially go out to bid in the next month. One of the things we have to solidify, too, is just getting all the total funding for the parking lot. We don’t have that yet. We have to get the real cost first. That can cause a little bit of a hiccup in the timeframe,” said Greene. 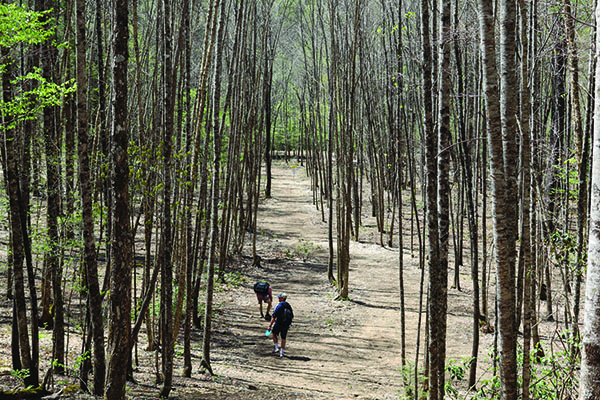 The goal was to develop a high-level of difficulty and be considered a ‘championship-level course’. The layout uses nature to its advantage, like this fairway that is hugged by the forest on either side.

Greene said that even more time will be needed once they have funding because there is a request to use grass pavers for the parking lot. He said that it could take some time to get this going, and that it would be another six to eight months of construction once they do get it started.

Hyatt said that it was a calculated decision to use the Fire Mountain brand for the disc golf sanctuary. He said that he wanted to begin associating that brand with outdoor adventure, especially as he continues his goal of making Cherokee an outdoor destination.

“I think leadership is on board with it, for the most part. They’ve been tasking us with outdoor recreation opportunities, tasking us with ecotourism opportunities. We’re about to have two of the finest things in western North Carolina, in my opinion. Fire Mountain’s success has been off the charts. I think this will be the same.”