Jayce Daniels, a member of the Eastern Band of Cherokee Indians and a senior at Piedmont High School in Piedmont, Okla., has signed a letter of intent to play basketball at Northern Oklahoma College. 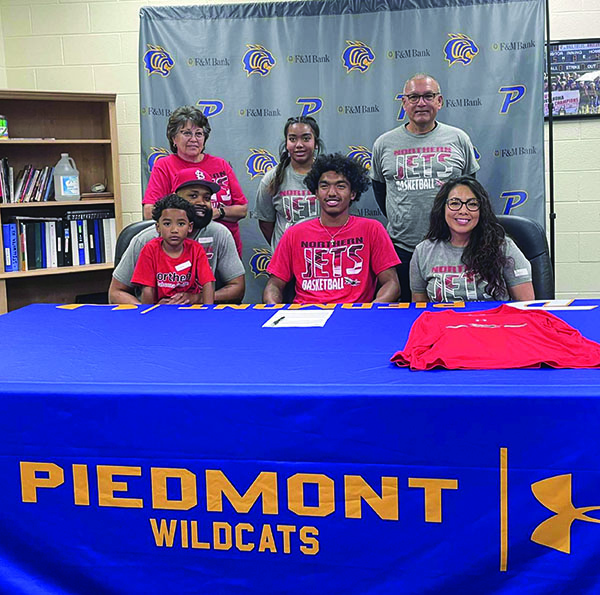 Jayce Daniels, seated center, a member of the Eastern Band of Cherokee Indians and a senior at Piedmont High School in Piedmont, Okla., has signed a letter of intent to play basketball at Northern Oklahoma College. (Photo contributed)

“I’m excited and looking forward to playing at the collegiate level,” he said.  “My goal over the next two years is to increase my opportunity to reach my ultimate goal – which is to play at the Division I level.”

Daniels was named 5A (Oklahoma) All-Conference in both his junior and senior years, and he was the 2021-22 Piedmont High School varsity basketball offensive player of the year.  In the 2020-21 season, he was named a 5A All-Star by Class, and in the 2021-22 season he was a nominee for the McDonad’s All-American game.  An outstanding overall athlete, he was also a state finalist and 5A Suburban Conference champion in the 300M Hurdles.

“I want to thank my family for supporting me and putting me in positions to succeed,” said Daniels.  “Thanks to my coaches for helping improve my game.  I thank my friends for all their love and support.  I especially want to thank my extended family and friends in Cherokee for always supporting me and for their role in my early years of basketball.  A special thank you to Truman Taylor for his time in the gym with me.”

He is also focused on his future beyond basketball. “I’m majoring in broadcast journalism and hope to become a sports broadcaster following my basketball career.”

His mother, Jessica Hogner, commented, “We are so excited for Jayce.  Basketball isn’t over for him, but now the work truly begins.  This is something he has wanted to do all his life.  It’s the perfect scenario.  He continues his education while playing the game he loves.”

She is also happy with his decision of schools.  “We think this junior college route he has chosen is a great transition allowing him to adjust to the academic rigor of college and also give him the opportunity to be on the court, improving his skills and preparing him for the next step – as Jayce says, ‘he’s improving his stock’.”