Stakeholders from across North Carolina and beyond were present on Tuesday, March 22 to see the Cherokee Indian Police Department presented with an AMBER Alert toolkit.

This award comes as part of the AMBER Alert in Indian Country (AIIC) Initiative. It looks to get the proper tools in the hands of Tribal officers and programs. These distributions are directly tied to facilitating the Ashlynne Mike AMBER Alert in Indian Country Act. Ashlynne Mike was an 11-year-old who was abducted and murdered in 2016. A lack of available resource in the Navajo Nation meant that an AMBER alert was not issued for 13 hours. 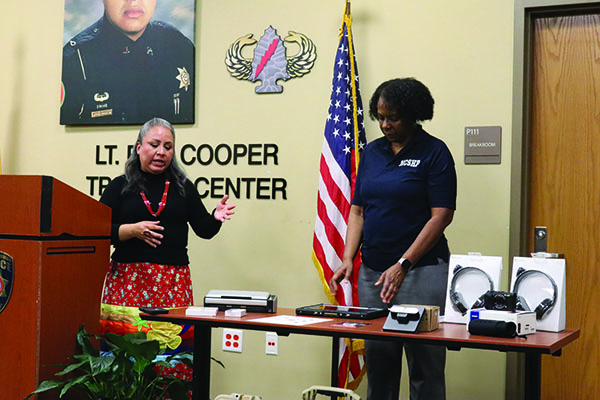 Tyesha Wood is the AIIC Project Coordinator, and she made the trip to Cherokee to present the toolkit. She said that the situation with Ashlynne was exactly why they needed to visit communities in-person.

“So that another incident will not happen like what happened with Ashlynne Mike. She never returned home. It is from what happened with our tragedies is what we’re able to do here today. To visit with communities and hear their stories. Provide whatever resources we have available. Whether it’s training. Whether it’s just introducing tribal communities to the state AMBER Alert program. That, to me, is success,” said Wood.

Janell Rasmussen, administrator of the AMBER Alert Training and Technical Assistance Program (AATTAP), was another stakeholder that came to Cherokee from out-of-state. She pointed to the coordination that the Tribe already has with North Carolina and encouraged both entities that they were ahead of the game. Multiple speakers mentioned the relationship between CIPD Office Administrator Alica Wildcatt and Director of the North Carolina Center for Missing Persons Nona Best, who also made the trip for the event.

“It’s unusual to see such a phenomenal partnership between a state agency and a Tribe and to see the great work that is being done here in North Carolina,” said Rasmussen.

This idea was reiterated by Wood, who discussed how difficult it is to balance the specific issues that lie with each Tribe.

“The reality of this program is that it’s important that we meet and come to traditional homelands, to your community, to understand the dynamics. To understand the culture. To understand those challenges first-hand. Whether it be internet capability, like broadband access. Whether it’s communication. The relationship that Alica and Nona have is unique, being that they established this partnership well before the AMBER Alert Indian Country Act was formed.”

Wood said that the Eastern Band of Cherokee Indians is one of the first tribes to receive this toolkit. She said that any federally recognized tribe is eligible to apply for one of these kits, but that they only have the funding for 150 at this time.

Each kit consists of the following items:

This event brought together the CIPD, N.C. Center of Missing Persons, AIIC, AATTAP, and the NC Highway Patrol. Each speaker touched how important it would be to maintain communication across these entities to ensure safety for Cherokee children. 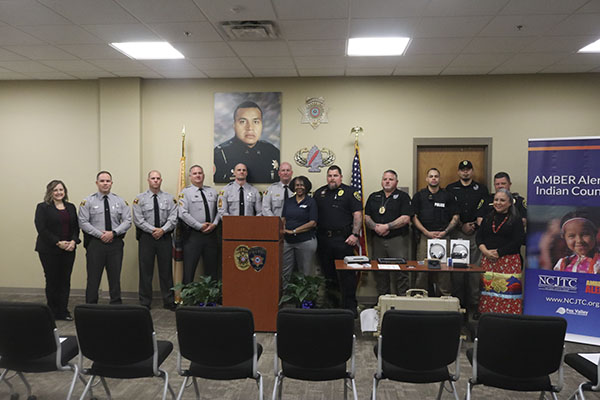 “This is a very special time for the Qualla Boundary and the state of North Carolina. It is important for all of us what the Ashlynne Mike AMBER Alert in Indian Country Act has been able to accomplish to close the gap in assistance needed when a child is missing,” said Best. “This toolkit will ensure that if a child goes missing, the most effective, efficient, and quickest response will be in the hands of the Cherokee Police Department and the AMBER Alert Coordinator.”

Cherokee Chief of Police Josh Taylor mentioned the coordination needed for this project on multiple occasions. He insisted that credit be offered to Alica Wildcatt and the job she has done with Best. The idea that he says he wishes to push moving forward is ‘one team, one fight’.