A man known for his love of Cherokee history and work at the Sequoyah Birthplace Museum has been made an Honorary Member of the Eastern Band of Cherokee Indians (EBCI).  Tribal Council passed Res. No. 187 (2022) during its regular session on Thursday, March 3 bestowing that honor on Charlie Rhodarmer who has worked at the Museum since July 2000. 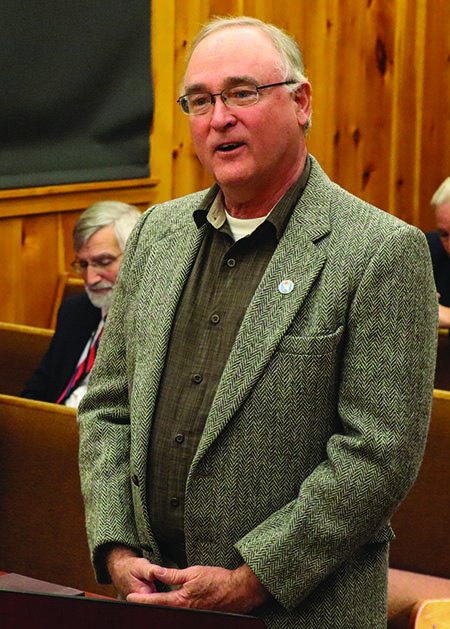 A man known for his love of Cherokee history and work at the Sequoyah Birthplace Museum has been made an Honorary Member of the Eastern Band of Cherokee Indians (EBCI). Tribal Council passed Res. No. 187 (2022) during its regular session on Thursday, March 3 bestowing that honor on Charlie Rhodarmer who has worked at the Museum since July 2000. (SCOTT MCKIE B.P./One Feather photos)

Cherokee Co. – Snowbird Rep. Adam Wachacha, who submitted the legislation on behalf of the Sequoyah Birthplace Museum, said during Thursday’s discussion, “If you have not ever had a chance to sit down with Charlie and just have any type of history discussion with him, you really need to take that opportunity and gain some knowledge of different things. Charlie is just a wonderful person to be around, well-deserved of this type of recognition.”

Rhodarmer thanked everyone and said he was very humbled by the honor.  “When I got to the Museum, I thought I’d just try it for about four or five years, and it’s been 22 years. It’s just been and incredible opportunity for me.”

He is a living history performer and noted, “I’m proud of my own Scottish and German heritage and I’m also proud of my Cherokee friends and their history and culture. It has been an incredible privilege and honor. 22 years has gone by in the blink of an eye. Thank you for giving me the honor to tell the story of Sequoyah and the Cherokee history.”

The resolution states, “Mr. Charlie Rhodarmer is a great example of extensive Cherokee history and shares much of that knowledge with both individual and tour groups at the Sequoyah Birthplace Museum of which he is the director, and Mr. Rhodarmer lives and breathes EBCI, Cherokee Nation, and Cherokee history.” 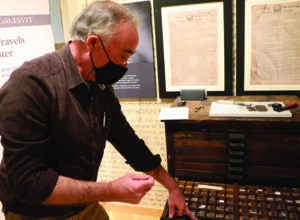 Principal Chief Richard G. Sneed spoke highly of Rhodarmer stating, “Charlie is a true ambassador of our Tribe, loves our people, loves our history and is certainly a fixture at Sequoyah Birthplace (Museum).  I don’t think there’s anybody better who deserves this honor so I stand in support of this resolution today.”

Gene Branson, is quoted in the resolution, “As Chair of the Board of Sequoyah Birthplace Museum and an enrolled member of the EBCI, I am very confident in Charlie’s ability and love for the Eastern Band to answer any an questions to share Cherokee history in any forum that he participates.  Charlies is very deserving of being granted an honorary membership of the Eastern Band of Cherokee Indians.”

During Thursday’s discussion, Branson said, “Charlie is every bit of what that resolution says. He is a jack of all trades and a master of every one of them. He is a great ambassador for not only the Museum, but, more importantly, the Tribe. He is a great speaker and he speaks on behalf of the Tribe very well wherever he goes.”

Rhodarmer earned an associate’s degree in criminal justice from Haywood Community College and a bachelor’s of science degree from Western Carolina University.  He also served in the U.S. Army in the 82nd Airborne Division.