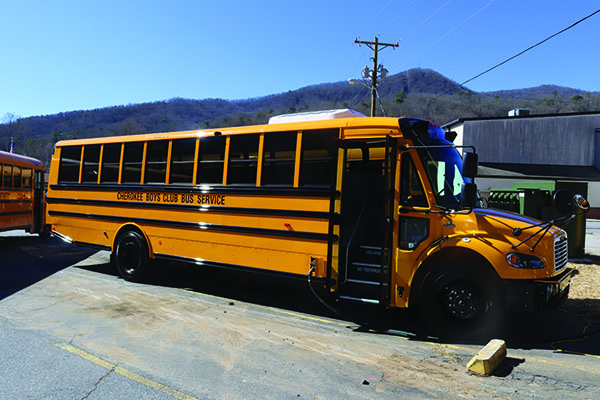 The bus, which will serve Cherokee Central Schools (CCS), is part of a pilot program that is drawing several entities together. Like all other school buses at the CBC, this vehicle has been produced by Thomas Built Buses in High Point, NC. The Cherokee Boys Club is a Thomas certified garage and can service any Thomas bus at their facility.

The effort stems back about three years and has been pushed forward by two primary individuals. Katie Tiger is the Air Quality Program Supervisor and Donnie Owle is the service manager for the CBC.

“It’s a long time coming. A lot of hours were put into it to get it here,” said Owle.

Tiger said that they have been collecting partners and grant options throughout the entire process.

“At first, when we wrote the grant, it was Donnie and I. Then the Land-of-Sky Clean Vehicles Coalition out of Asheville, they really helped us get everything together and had some parts to the grant writing process,” said Tiger. “We just recently got the diesel emissions reduction act grant from EPA. It’s really exciting because we’re the first Tribe east of the Mississippi to receive a grant like this.”

That was just for the grant writing process. When it comes to funding, the orders of business have only gotten more complicated. Phase one was this first bus, now phase two is another four being added to the fleet this summer.

“That was a collaboration between again Donnie and I, and Duke Energy came to the table with some money. Then North Carolina Clean Energy Technology Center helped us put some verbiage into our grant and we submitted it to the EPA. We were approved. Not for all of it. We applied for 800,000, and they approved us for 502,000. Being that Donnie and I are a little stubborn, we didn’t want to change our work plan. We didn’t want to change the number of buses that we wanted to bring to the Boys Club. So, we went to the Tribe to ask for some supplemental funding from them and they agreed. We got 297,000 and some change, so we’re able to keep our work plan intact and go after four new electric buses,” said Tiger.

According to Owle, the cost of each bus is 342,000 dollars and each charging station is 50,000 dollars. Tiger and Owle said that it’s not all been smooth sailing and that each of the partners has their own requirements in the project. 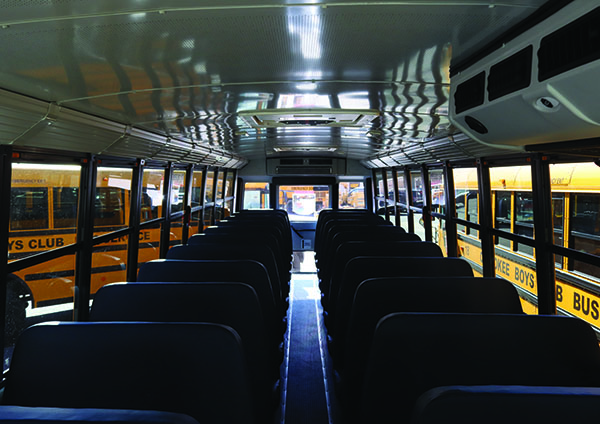 “When we say there have been issues, there’s going to be obstacles in a large project like this. Duke has their rules that they have to follow from the utilities commission and the tariff, and that’s what this pilot program where they’re offering 215,000 (dollars) per bus is from. With that, the chargers have to be vehicle-to-grid capable. That’s part of the pilot project. Because Duke wants to see if we can offset the power usage at peak times,” said Tiger.

With the bus coming to Cherokee, much of the work is now in the hands of Owle and his team.

“My challenge has not started yet. When the bus gets here, we have to destroy one of our buses. That’s when my work starts, is destroying that bus. We have to send [North Carolina DEQ] an invoice for the bus and pictures of our destroyed bus before we can get our money back,” said Owle.

He said that destroying the bus is required to receive the grant money. The goal is to not only adapt the CBC fleet, but to also make sure those emissions from the bus that is replaced aren’t going into the environment.

With this being a pilot program, Owle and his team are being tasked with doing extensive research on how the bus will operate on their routes. He said that Cherokee would be a great place to test more of the extreme conditions of bus travel. With long and short routes, mountains, and both hot and cold weather, Cherokee can offer a chance to test the vehicle in a multitude of situations.

“Plus, you got [a route] that goes up Soco Mountain. It’ll climb up, but on the way back down it will charge itself. It has regenerative brakes. That’s one way to look at it to see how it’s going to do on the mountain. I know they’re real, real strong. The electric motor is 295 horsepower, so there’s no problem with power and moving the bus. But it just depends on how long they last. They’re claiming a full battery will go 150 miles, depending on cold and heat. Everything is going to depend on what you’re using to be comfortable,” said Owle.

Yona Wade, director of community affairs for CCS, said that everyone on the school side is ecstatic to be receiving the bus.

“I don’t think it’s simply a win for our school, it’s a win for the environment and what we do … as good stewards to nature and the community here. That’s the whole point of this. It’s nice to say, ‘yes, we have the first electric school bus.’ But it’s so much more beyond that. It’s setting the stage for what it means to be a good steward of our environment and that we’re looking towards future generations,” said Wade.

“Thank you so much to Cherokee Boys Club and Katie Tiger and her department for having the foresight and the leadership to move us towards creating this electric school bus fleet that will be beneficial not just here in the short term but will have a long-lasting effect on our student’s health and the health of the environment.” 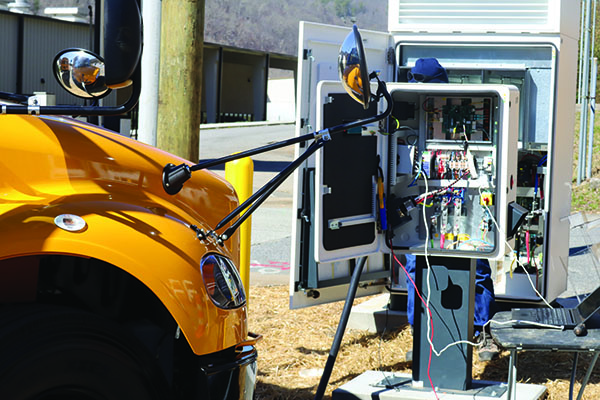 Tiger said that the future of the project now rests with how this new bus will perform. She said that the initial plan was to test the vehicle before ordering any new buses, but the chance to push the project forward with federal dollars means they’re ahead of schedule.

“It depends on if Donnie likes these buses or not. Really, this first one was supposed to be a pilot project. But the way that the money is coming down from the federal government, there’s a lot of it there. So, we have to jump on it when the opportunity rises. That’s how we got roped into this other one with the four buses before we even get the first bus,” said Tiger.

The wheels continue to turn on this project, and the associated parties already have some work prepared for phase three of this project. This would be an even bigger wave of electric buses to the CBC. Eventually, the goal is to be the first school system in the state with a fully electric fleet.

A celebration to show-off the new bus will be held on Tuesday, March 15 at the Cherokee Indian Fairgrounds at 11:15 a.m. A class from CCS will ride in on the bus and stakeholders from the Tribe and across North Carolina will be in attendance.