ON THE SIDELINES: What a season for the Lady Braves

Karch Kiraly, the greatest volleyball player in history in my humble opinion and current head coach of the USA Women’s Volleyball team, once said, “We are all going to fall short.  We are going to have some bitter losses, very painful defeats and failures.  We have to use those to come back even stronger.  That’s what makes it sweeter, when we can overcome those and figure out a way to win.  The great teams can do that, and those are the gold medal-winning teams.” 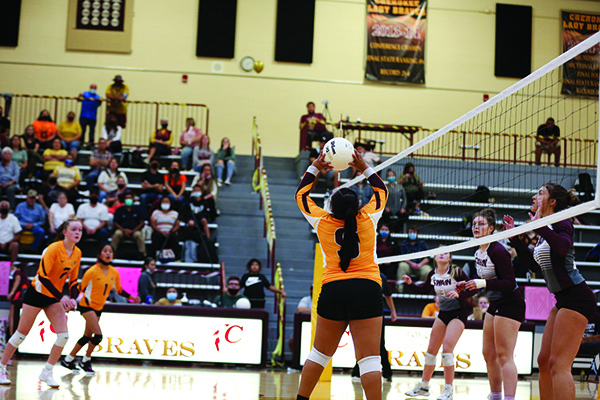 This year’s Cherokee Lady Braves varsity volleyball team did that and made history this season.  Finishing the season at 13-11 (6-4 in Smoky Mountain Conference), the team qualified for the 1A state playoffs for one of the few times in school history.

“How can one actually recap what a special season this was,” said Pam Sumner Bryant, head varsity volleyball coach.  “It’s not just about the games won but the growth of each of these ladies throughout the season.”

Early in the season, the Lady Braves defeated Andrews marking their first conference win in a decade.  They followed that up with five more conference victories finishing third overall.  They would go on to sweep Andrews, Hayesville, and Swain Co. in the regular season.

“Their success spoke for itself, but the respect these ladies gained, not only as players but also as inspirations to so many people, is insurmountable,” said Coach Bryant. 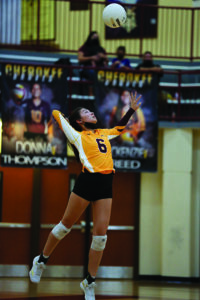 Alexis Davis, freshman, jump serves during a match against Highlands at the Charles George Memorial Arena on Sept. 16.

This team put Cherokee volleyball on the map.  The Charles George Memorial Arena was loud and full of fans during volleyball season – something usually reserved for basketball time.

“We are grateful to our seniors who are the example of ‘trusting the process’ and excited for the direction we are going with Lady Braves Volleyball,” Coach Bryant added.  “For all the family, friends, administration, athletic support staff, School Board, and community, we say ‘thank you’ for all of the support for this team along this journey that has only just begun.”

The players themselves were surprised and happy with the results and proud of their accomplishments.  Aria Foerst, senior middle hitter, told me in an interview mid-season, “I think we didn’t know what we were going into this season. We didn’t know the outcome. We didn’t know what was going to happen. We just sort of started winging it and hoped for the best and it got us somewhere!” 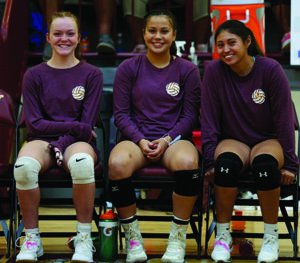 This year’s Lady Braves seniors were honored on Oct. 14 including, left to right, Aria Foerst, Donna Thompson, and Mackenzie Reed.

It definitely worked and it definitely got them somewhere – somewhere this group of players has never been before; the state playoffs.  While they didn’t go all the way – that is fine.  Every program has to start somewhere, and this was a phenomenal start.

The Lady Braves ended their season with a 3-1 loss at Cornerstone Charter in the first round of the state playoffs, but it certainly wasn’t the end – it was just the beginning.

Stephanie Maney, Lady Braves volleyball assistant coach, noted, “I’m just proud of the girls for accomplishing so much.  They improved so much as the season went along.  To be continued…”