ON THE SIDELINES: Coach Pam deserves Coach of the Year honors

Charles George Memorial Arena was absolutely rocking on the evening of Thursday, Oct. 14 with fans packed in cheering and waving signs – and, it wasn’t even for a basketball game.  It was for volleyball.  What?

The Cherokee Lady Braves varsity volleyball team is currently enjoying its best season in recorded school history, and the lady at the helm deserves Coach of the Year honors.  The 12 wins this season equals the 12 losses from last season when they went 0-12. 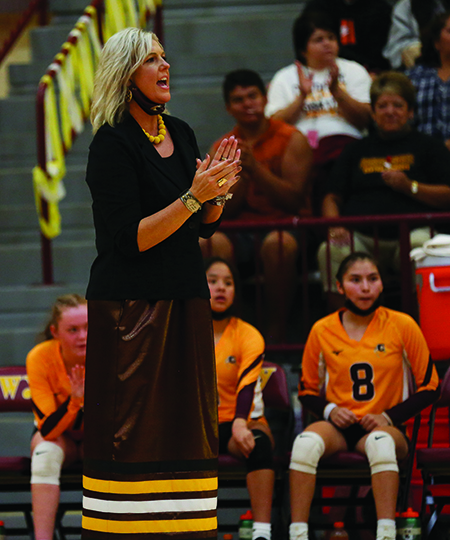 Pam Sumner Bryant, affectionately known as Coach Pam to her players and staff, is a major reason for the team’s success.  Naming her Smoky Mountain Conference Coach of the Year at the end of the season should be a given.  That isn’t even close.

I think she should be named NCHSAA (North Carolina High School Athletic Association) 1-A State Coach of the Year.  That honor generally goes to a coach whose team won a state title, and the Lady Braves might still win that title.  But, to me, it doesn’t matter because what she has done to turn the program around is incredible.

She has established an environment for Lady Braves volleyball centered around teamwork and a strong work ethic.  In a recent interview, she spoke about her players, “They just don’t quit.  They just keep going.  It’s probably one of the neatest team settings I’ve ever been a part of because they are just in it to win it and they don’t quit.”

This huge turnaround, and it has been huge, is due to that work ethic inspired by Coach Pam and her ability to get her players to buy into a new way of playing.  To put it into perspective, this year’s team has 12 wins as stated earlier.  According to Maxpreps, from the 2010-11 season to the 2019-20 season, Cherokee had 27 wins.

Coach Pam comes to Cherokee with a wealth of knowledge about the game of volleyball as both a player and a coach.  She was a member of the 1991 and 1992 state championship teams at Smoky Mountain and was named MVP of both of those state title matches.  In 2013, the NCHSAA named her to the “100 to Remember” list of female athletes in the state.

She went on to success at N.C. State University where she ended her career with 1,358 kills (still in the top 10 in the program).  As a senior, she had 581 kills which is second most in a season in the school’s history.

In a 2018 alumni spotlight on her by N.C. State, she noted, “I just loved the grind and the competitiveness.”

If you watch her on the sidelines, she still seems to love the grind and the competitiveness.  The confidence that she has in her players and her zeal for the game come through each match as she coaches.  But, her coaching is more encouraging and motivating than anything.