I remember trying to tow the company line. The centuries old Cherokee Indian Fair has been the most expensive event in the long list of seasonal events that the Tribe sponsors and executes. My bosses, from the time I arrived to work here, told me that all materials and press releases for the event were to be produced with the titled “Cherokee Indian Fair”. And yet, without fail, every year for 17 years, I would hear someone in leadership publicly announce that the “Fall Festival” is approaching. Many in the community still call it that and it doesn’t matter how many times they hear it and see it, they simply translate Cherokee Indian Fair to Fall Festival. You ask an elder if they are going to the Cherokee Indian Fair this year, and eight out of 12 of them will say “What’s that? Oh, you mean the Fall Festival”.

The Fair was, according to Cherokee history literature, a product of economic need for the Tribe. At the beginning of the 20th Century, Cherokee people depended on logging, farming and federal funding for support of the communities. 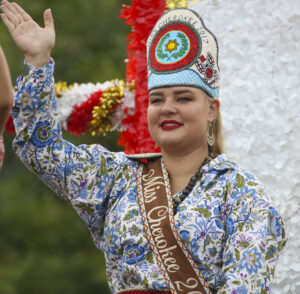 The “Cherokee Heritage Trails Guidebook”, written by Barbara R. Duncan and Brett H. Riggs, states, “The first Cherokee Indian Fall Fair, in 1914, was subsidized by the Tribal Council specifically to encourage tourism. The opening of the Great Smoky Mountains National Park in 1934, adjacent to the Qualla Boundary, although controversial within the tribal government, was finally welcomed as a way to attract visitors, who brought a new source of income.”

There isn’t much doubt in my mind that our community back in that day would have been more concerned with the revenue. That first Fair coincided with the beginning of the first World War. The Tribe would have seen very lean times as the country focused on supplying troops and many families would have been doing without to supply the troops. Things like vacations and trips to see fairs would have been low on the list of things to do for the American traveling public, if they traveled at all. Then, in 1929, the Great Depression began, further providing challenges to the Boundary as the entire nation suffered through a financial famine. The Fall Fair or Festival was a lure for those looking for escape from the hardships of life.

Elders tell great stories of those times and how the Fair impacted their lives. Late Beloved Man Jerry Wolfe shared his memory of when the first years of Fall Festival brought the first midway carnival rides to the Boundary. It was the first time many of the locals had ever seen or been near the whirling and twirling amusement machines like the Ferris Wheel or Scrambler. Young and old were fascinated by them. So, instead of lines of children waiting to get a ride on them, you would primarily see adults and senior citizens lining up and experiencing the thrill of these new machines. Jerry said it was quite a sight to watch our older population, some having fun and some completely terrified, while riding those early carnival rides. Jerry shared a much more colorful experience while people-watching at the Fair, but I will leave that to your imagination.

The N.C. Agricultural Extension Office and Qualla Arts and Crafts Cooperative have hosted the Exhibit Hall events for many years at the Fair. Community members compete for cash prizes and bragging rights for their produce, crafts, and artwork. The two entities would receive many entries from community members who knew that part of their reward for bringing an entry was more than just a chance to win a cash prize and ribbon. If they entered an exhibit, they received free admission. There used to be an admission price for anyone, including tribal members, who came to the Fair. More than a decade ago, the Tribal Council decided that tribal members should not pay an admission fee to the Fair. When that happened, many of those who participated in the contests stopped submitting entries because they no longer had to worry about the admission fee to the Fair. When you come to the Fair now, you still see great produce, arts, and crafts submissions, just not as many of them. In other words, still great quality, just not the quantity. The Cherokee people are born craftsmen and artists. Some of the most beautiful and intricate crafts and artwork will be on display at the Fair.

The Fair, beyond the exhibits, the bands, the games, and the rides, is a homecoming day. Locals debate the purpose of the Fair, some saying it continues to be a tourism attraction, while most saying that it is a community event for the Eastern Band of Cherokee Indians. It has become a tradition for off-Boundary family members to “come home” during Fair week. Hometown highlights are the Stick or Indian-ball games and the Miss Cherokee pageants. Saturday of the Fair has been designated as Community Day, where local participation in games and cooking are featured.

One of the great simple pleasures of the Fair is the opportunity to hear the Cherokee language in a natural environment. It is very common to be walking through the fairgrounds or the exhibit hall and hear conversations in the Cherokee language. Elder men and women sitting on a bench or propped up on a fence, sharing fellowship. Typically, within a few minutes of any discussion, you will hear them laughing. Humor is foundational to the Cherokee community. Friends expect and experience good natured ribbing and to be the butt of at least one practical joke during the Fair. One of the challenges, I believe, of teaching the language, is that it does not lend itself to “traditional” forms of language learning. The same word or phrase in Cherokee may mean many different things based on the inflection, emphasis, facial expression, and body language the speaker uses while saying it. It is a beautiful language and hearing it in the context of a conversation helps those of us who don’t understand it want to learn more.

At the Fair, we eat. Chickens die. Lots of chickens. Deep fryers are put to the test. Fatback and grease are supplied for your bean bread. The obligatory “taters” and boiled cabbage are present. You will find that you can top frybread with just about anything and it will taste good. In recent years, vendors have been making their cheeseburgers using frybread as buns. If you are a hardy eater, you might find yourself in a contest. If you are an aficionado of carnival chow, the midway will have your cotton candy, candy apples, and fried Oreos.

The Tribe invites in craft vendors, many of them local, to sell to the public at the Fair. Some vendors make their own crafts to sell, while others bring factory made items that have a Native look. Tourists and locals alike take home treasures each year. One person’s prized memento might be an expensive handcrafted piece of pottery, while another my treasure a bag of delicious, fresh-made kettle corn. Along with those who sell their art, there are many vendors who come to provide the Tribe with services. In recent years, the Tribe’s Public Health and Human Services division has offered health check ups and flu shots at the Fair (yes, it is that time of year again).

So, call it what you will, Fall Festival, Cherokee Indian Fair, or Fall Fair. I tend to side with and appreciate the many locals who know it as the Cherokee Homecoming. The Fair kicks off with a full scale, top of the line Cherokee Fair Parade on Tuesday, Oct. 8. It is such an important event that locals will come and line the streets hours early to “get the best viewing spot”. Bring a chair and camera for pictures, because you will want to have something to put in your memory book.