Since time immemorial, Cherokee people have harvested traditional plants, such as sochan and ramps, from the beautiful mountains in western North Carolina.  Over time, laws have prevented tribal members from harvesting these healthy plants.

After years of work by various tribal officials, members of the Tribe may be able to receive a permit to gather sochan legally in the Great Smoky Mountains National Park in the very near future.  Park officials completed an environmental assessment (EA) last fall, and the comment period on that document ended on Dec. 13, 2018.

“We are currently analyzing public comments, preparing responses, and writing a draft Finding of No Significant Impact (FONSI),” said Mark Collins, Park environmental protection specialist.  “Superintendent (Cassius) Cash will review all of this information and make a recommendation to Bob Vogel, regional director of the National Park Service’s Southeast Region.” 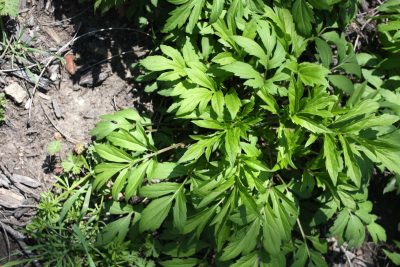 Sochan early spring leaves, also known as the turkey foot, are shown in the Great Smoky Mountains National Park. According to the EA, “…the turkey foot consists of the upper three leaves of the sochan as the plant begins to grow from the rhizome in the spring. The portions of leaves that would be collected prior to flowering would be no more than 12 inches (30 centimeters) long.” (NPS photo)

Collins said if the FONSI is approved and signed by Vogel, the Park and the Tribe will then be able to sign the Plant Gathering Agreement and permits would be issued soon thereafter.  In December, prior to the government shutdown, Collins noted that he hoped to have a decision from Vogel by mid-January.  An exact timeline is not known at this time due to the shutdown.

The 34-page EA is part of a proposed agreement between the Park and the Tribe which, according to information from the Park, “would establish a management framework for sustainable gathering of sochan (Rudbeckia laciniata) by EBCI members for traditional purposes”.  The National Park Service (NPS) approved changes to 36 CFR Part 2 (Gathering of Certain Plants or Parts by Federally Recognized Tribes for Traditional Purposes) in late June 2016.  Tribes must enter into agreements with the NPS and must have a “traditional association to lands within the national park and the plants must be gathered only for traditional purposes”.

Under one proposed alternative, the EBCI Natural Resources Department would maintain a list of approved tribal members and individuals being selected who would receive a gathering permit.  The EA states that the proposed gathering season would be March 1 through May 31.  “Following traditional practices, permittees would be authorized to gather what is referred to by the Cherokee as the ‘turkey foot’ of the perennial sochan plant,” the EA states.  “…the turkey foot consists of the upper three leaves of the sochan as the plant begins to grow from the rhizome in the spring.  The portions of leaves that would be collected prior to flowering would be no more than 12 inches (30 centimeters) long.”

Tribal officials have stated that once the formal agreement is finished for sochan, they will begin the process for the gathering of ramps.

The gathering of these plants is vital to the health and well-being of tribal members.  In an article for the American Indian Health and Diet Project entitled “Foods Indigenous to the Western Hemisphere: Ramps”, Scott Sheu wrote, “Their high vitamin content and blood-cleansing properties meant that the ramps were highly prizes by the American Indians for their nutritional value as well…the Cherokee consumed the ramp to treat colds and made a juice from the plant to treat earache.”

Three years ago, I attended a symposium held at the Yellowhill Activity Center called “Feeding Ourselves: Food access, health disparities, and the pathways to healthy Native American communities”.  This event focused on the idea of food sovereignty, in other words, tribes taking the reins over much of the food their communities consume.

Crystal Echo Hawk, a member of the Pawnee Nation and president and chief executive officer of Echo Hawk Consulting, said at the symposium, “Our little ones face epidemic proportions of obesity and type 2 diabetes.  Oftentimes, we don’t realize how big of a part food plays in the health problems that we face as Indian people.”

Wilson Pipestem, a member of the Otoe-Missouria Tribe and founder of Pipestem Law and Ietan Consulting, spoke at the symposium and advocated for a return to traditional foods which he said would be a step forward in battling obesity and diabetes. “Cherokee are not eating sochan at every meal.  They are not eating ramps at every meal.  We have to think about the things we are putting into our bodies.”

With the work being done currently by tribal officials dealing with gathering of these traditional plants, things are looking up.  Also, tribal gardening initiatives are occurring that give hope to a return to better diets.

Last April, students at the New Kituwah Academy planted a garden including kale, mustard greens, creasy greens, and onions.  “Part of what we’re seeing right now is that there is a large gap between our younger generations and our older generation on growing food and knowing where your food comes from,” Joey Owle, EBCI Secretary of Agriculture and Natural Resources, told the students that morning.  “As you start to grow your own food here, go home and encourage your parents, your aunts, your uncles, your grandparents to do their own raised beds in their own front yard…this entire valley used to be beans and corn and squash.”

Owle and his staff work daily to encourage farming on tribal lands.  It is farming/gardening initiatives such as this as well as formal agreements the Tribe will enter into for legal gathering of traditional plants that will work together to improve the diets and overall health of tribal members.  It will be a good day when “Indian Dinners” contain nothing but traditional Cherokee foods.